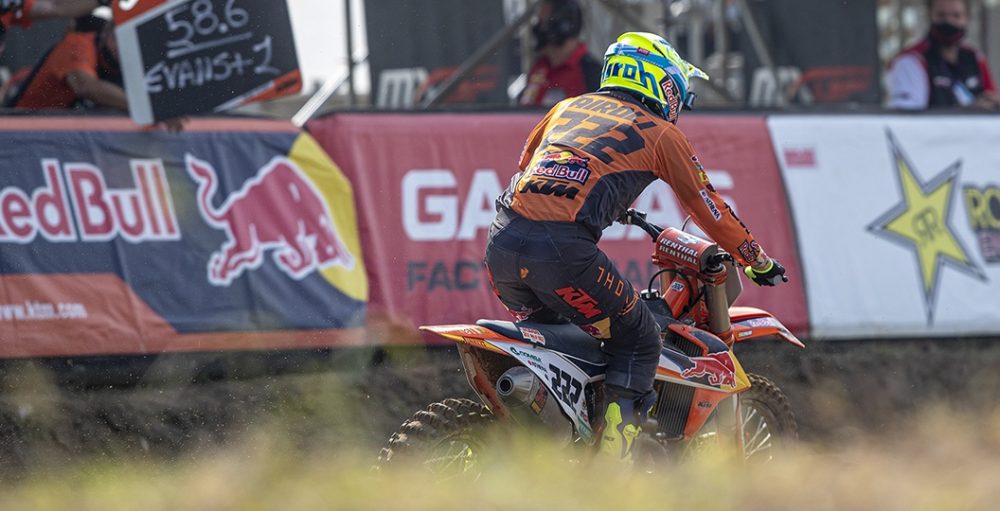 For Antonio Cairoli to tackle the Grand Prix of Citta di Mantova just two days after breaking his nose and not lose any points to Tim Gajser, that is only positive. The nose even caused balance issues and other problems as well. Cairoli explains all of that in this exclusive MX Vice interview, as well as talking candidly about the track here at Mantova. A lot of interesting stuff from the nine-time champion. This was first posted as a post-race podcast elsewhere on MX Vice.

MX Vice: 4-4 on the day, I think, which is a solid day considering you broke your nose on Sunday, which was not even a week ago. You did not lose any points to Tim. You didn’t gain any, but there is a long way to go. I think you can only be happy with today.

Antonio Cairoli: Yeah, it was only two days ago I had this big face plant and I’m struggling with breathing very much. Almost cannot breathe from my nose. My ear is stuck too. I lost a little bit of balance also. When I have to push, my heart rate goes high. I feel a little bit dizzy all the time. I have to slow down all the time. In one way, I’m happy. The pain was not too much from the goggles with the helmet, so this was already a good thing. Normally otherwise I had to wear a brace or something. Overall, I’m happy. We did not gain any points, but we also did not lose points. It’s positive.

Considering everything, I thought maybe you would drop off at the end of the motos. It didn’t even look like that happened. Did you feel it at all towards the end of the second moto?

No. To be honest, I was not tired. I could not go more, because if my heart rate goes a little bit too high then I start to feel a little bit dizzy and not good. I have to control that a little bit. The speed that I was carrying was fine. I could finish without too much problems. The most important thing was to not crash again and not take risks, because this track is a very difficult one. How they prepare it is, I think, not the best way. It’s quite sketchy. We have seen a lot of crashes. I think they put too many jumps in – there are little jumps everywhere, waves and all of this. You could normally find the way to pass on this track all of the time, and now we see two races that are almost the same from the start to the end.

Yeah, of course. For me, they should rip it way more deep and leave it like that. This ground compacts very easy and then you have this problem where you have sharp bumps, plus you have sloppy ruts in the corner with all the bumps inside. If you go in the rut you cannot even cross ruts or something. I think they should prepare a little bit better. This is what I suggest also, but they do not listen too much. I have some years of experience I think. I for sure like when it’s rough, the track, but I also like when it’s safe.

You said on Sunday you talked to the track crew quite a lot to offer up ideas, opinions and just whatever you see.

Yeah. I try to talk a lot, but it is not easy. Everybody wants to show that they have a good experience. We have seen a lot of crashes, unfortunately, and I’m sad to say most of the time it’s because of the track, these crashes. I don’t want to complain, because I like rough tracks. I have always liked them in my career. The only problem is it has to be rough, but it has to be in a way that you can still ride with technique. Not just fast and sharp bumps on a track like this, where you have the possibility to prepare super.

Talking about track prep, on Sunday it seems like we are going to have something completely different. A lot of rain is forecast for Friday, Saturday and Sunday. Do you think that will help you with your ear and nose issues? Obviously, it’s going to slow the pace down. I guess balance is going to be even more important though.

I do not know. I hope my balance is coming back as quickly as possible, because if it’s like last year on Sunday then you need a lot of balance with the mud and a lot of ruts. Of course, fitness-wise is a little bit easier when it’s muddy like that. It’s a little bit slower and everything. You just kind of cruise around. The start is going to be even more important than now, of course. We will see. I like mud, but of course I would like to see a nice race with no mud and a nice track.