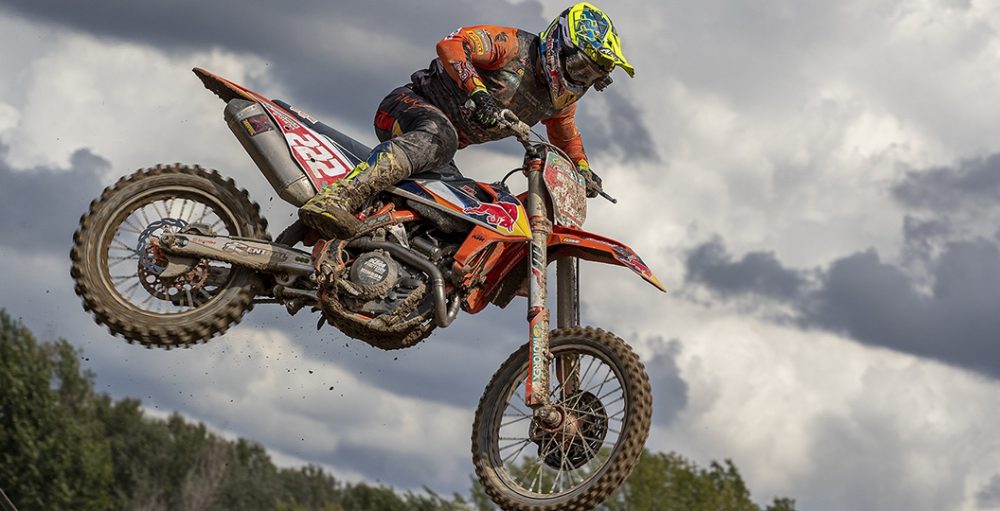 Antonio Cairoli salvaged six valuable points in the second moto at the Grand Prix of Lombardia, as he pushed to the chequered flag with a broken nose. It was a hectic day for the title contender and everything that happened is  detailed in the exclusive MX Vice interview below. Cairoli’s interview was first posted as an MX Vice post-race podcast, presented by FLY Racing, elsewhere.

Antonio Cairoli: Yeah, I’m ready to go Wednesday, of course. Today started good with the first moto. Very happy with the third place. The track is quite sketchy, so it’s nice to collect good points on this Mantova track with these conditions. In the second moto, I had a not-so-bad start. I was actually in the middle of the pack. I was trying to come across some riders, then I clipped the wheel of a rider on the first lap and crashed. I had to come from completely last and already I gained some positions. I was already in twelfth or thirteenth place when I had to stop in the Goggle Lane, because my roll-off was broken.

I changed goggles. Back to fifteenth or sixteenth,. then I tried to come back as quick as possible to the top ten. I was trying to pass one guy on the first uphill of the track, but I got sideways and kicked off the bike. I landed heavily on my face. From there I don’t really remember something about my crash. I could try to start again. I was completely banged up, but I wanted to keep going to collect some points. This is what we do not want, but on one side I am lucky that I just broke my nose and had some minor damage. We are going to be ready to go. Of course, we lost the red plate. This is not something to worry about. We know that there is still time to go back.

Well the, a broken nose. That is not going to be great. You will be able to ride with that though, huh? Maybe it won’t affect you too much? Anything else going on? Shoulder and knee still okay? I guess you landed on your face?

Yeah. Knee is still bothering a little bit, but it’s okay. I hope my nose does not give me too much problems, because for sure it’s maybe going to swell tomorrow and then with the goggles with riding maybe I can feel some pain or something. I think it will be okay and we will be there for the battle to be on the podium.

Shame about that second crash, because you stopped in the Goggle Lane and then immediately set purple sector times. You were clearly going forward again. Stopping for goggles was the right choice, because you could charge.

Yeah. It was my goal. I was a little bit… I did not know what to do, because I was around thirteenth place. Without goggles I could not go further than thirteenth or twelfth I think, because of the sand. I said, “Okay, I’ll stop but I’m going to lose three positions because [Calvin] Vlaanderen and [Jordi] Tixier are in the back. I decided to stop in the Goggle Lane and change the goggles. I was feeling great. I was pushing and then it happened, this crash. This can happen, but we have to try to not make these mistakes anymore. [I have to] try to stay in front and stay always on the podium. This is our goal.

This is the thing, I guess, because the one thing I’m taking away from today is points are important. Getting out of here healthy at the end of the week is the most important thing though, because already today there were hard square-edge bumps. This place can catch you out really quick.

Yeah. We saw a lot of crashes already and people injured quite bad. It’s not what we want. We have seen already the helicopter two times in the last fifteen days, and this is what we don’t want. We have to try to be careful. I ask always the track crew to fix as much as possible in those sketchy places, because it’s happening in one second to crash and be bad. The track is fast and everybody is going fast.

Before your crash and broken nose, I just want to emphasize that it was a good day for you. Third in moto one, great. Times in moto two were good. The nose is banged up, but as far as the feeling on the bike goes everything is kind of looking good for you at the moment.

Yeah. I feel very good. I feel fast. The condition is good. Everything is good. I cannot wait to be on the gate again on Wednesday. Of course my goal is to be in front and try to not make the mistakes that I made today in the second moto and try to be consistent.