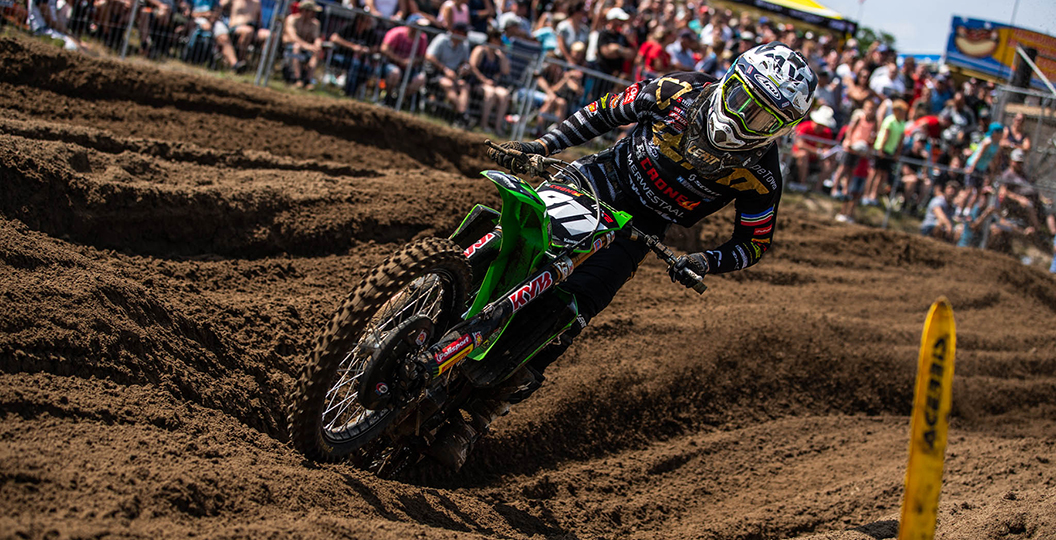 Adam Sterry appears to have taken a big leap forward in his career in the last couple of weeks, as he has transformed into a consistent podium contender aboard his F&H Racing Kawasaki. Sterry narrowly missed out on third overall at the Grand Prix of Belgium, for the second week in a row, but remained upbeat in this exclusive MX Vice interview. After all, there were plenty of positives to extract from the event.

MX Vice: It was good. It ended good. I don’t know if you really class it as that. I don’t know if it was podium or nothing for you, because that could have happened. I still think it was good though. Speed was good, results were good up until the second one where sh*t went sideways a little bit. I don’t know how you look at it.

Adam Sterry: Obviously, fourth is really good. My riding has been really good all weekend. I’m pretty disappointed, to be honest. I’m actually really annoyed about how today went. The first moto I can’t complain. It was really good. I pushed really hard. I used quite a lot of energy. I passed [Tom] Vialle near the end and that gave me third, which I was really happy with. Then obviously [Thomas] Olsen was out. I was expecting a podium after the second moto and it just didn’t happen. I didn’t get such a good start.

I made a few mistakes on the first lap, but we were there. We were there fighting for it. Unfortunately, Henry [Jacobi] made the mistake after the jump and there was nothing that he could do about it. I didn’t see him. I was committed to the line. I landed on his bike and winded myself quite bad, then after that there was no chance for me to catch back up to Olsen. Disappointing end to the day, but I cannot complain too much. The riding was good.

Were you aware that you needed just one more spot to get on the podium in the second one? At one point there was a four-way tie for third. If any of you had moved, that would have changed everything completely. I was watching and no mechanics were putting it on the board. I genuinely don’t know what was going on.

I’ve been sat here that long that I’ve seen that tweet that you put on, actually. I didn’t actually know but, in my head, I saw them in front of me. I knew it was going to be close, especially because I had a third in the first moto. I kind of thought maybe I needed to just pass Olsen.

In the end, I did. After the crash with Henry, there was no way of me doing that unless he crashed or something. After that, I was kind of over it. I was pissed off. I just rode around until the finish.

Have things changed for you over the last couple of weeks, where it is now podium or nothing? Is fourth no longer good enough? Have you outgrown that a little bit?

Yeah, sure. Fourth is good, but it also depends on how you get to the fourth. This weekend every session I was really good. In the first moto I thought I just need to ride like I can again, then the second moto no mistakes. I thought today was going to be the day, but it didn’t end up like that. That’s motocross. I guess. The last two weekends have been good, so I cannot really complain. I just need to take the positives out of it and hopefully a podium happens.

We know you are a good sand guy. I look at you as a sand guy. Last week was ridiculously good on the slickest hard-pack you can get, then you were really good on the deepest sand you can get. Are you just like a good all-around rider now? Do you feel like you can basically get a podium at Imola or in China, which is meant to be sand?

Yeah, sure. I feel that. I feel that is where my speed is at the moment. I have to say: I’ve always done good in the Czech Republic. Czech Republic [Loket] and Lommel are my two favorite GPs. They are complete opposite ends of the scale. What is weird is when there is perfect traction there is something I don’t like. Czech Republic everything is always moving, kind of like sand if you wish.

The front is always sliding. The back is always sliding. I think that is why I like it so much. I’ve always got good results there, so that helps. Lommel is also one of my favorite GPs, just because it is so difficult. The track is so tough. Here you can make so much time in one lap by line choice, so I feel that’s my strong point. Like I said, today it just didn’t happen after the second moto.

Seeing as these are your two best tracks, does that make the no podium at either of them sting a little bit more?

Now, yeah, but before I would like to have got a podium there but now afterwards, yeah. For sure it was definitely possible to get a podium there if a few things went my way. I think [Calvin] Vlaanderen today went 7-2 and he got on the podium. Last week in Czech Republic I went 6-2 and didn’t get on the podium. That’s motocross. No complaints. I just didn’t do enough second moto. It didn’t help with the crash from Henry, but my riding wasn’t as good as in the first moto. That’s how the day ended. Disappointing.

Riding wasn’t as good as the first moto, because maybe you were overthinking it a little bit?

Not really. I tried to push away the podium, but you know what it’s like. Could have got on the podium. It wasn’t that. I used quite a lot of energy in the first moto and the track was rough. One of the roughest I’ve ever seen. I just didn’t really find a good rhythm like I did in the first moto. When I crashed with Henry I winded myself pretty bad. I kind of knew the podium was over.

Mark Chamberlain was here. You obviously want to be on the ‘Nations team. This is maybe your last shot in MX2. Heard anything on that front? Obviously, you just want it no matter what.

Yeah, sure. I’ll run around at ‘Nations if I have to. That’s been a dream of mine since forever. For me, that’s good. I think the battle is between me and Ben [Watson] for that spot. Mark’s got a tough decision. Obviously, he got on the podium today. I also rode good. We are both really good sand riders. Assen is sand. That’s a strong point for us both.

Whatever the decision Mark makes, I’ll be happy if Ben gets it and I hope he’ll be happy if I get it. Either way, you just have to support whoever gets picked. Hopefully I can be on the ‘Nations team. If he picks Ben for the 250 and decides to go for me, I would be open to ride the 450 for sure. I would actually quite like to ride it on a 450. I think that would be good. Like I said, I’ll do anything if I get picked for the ‘Nations team.