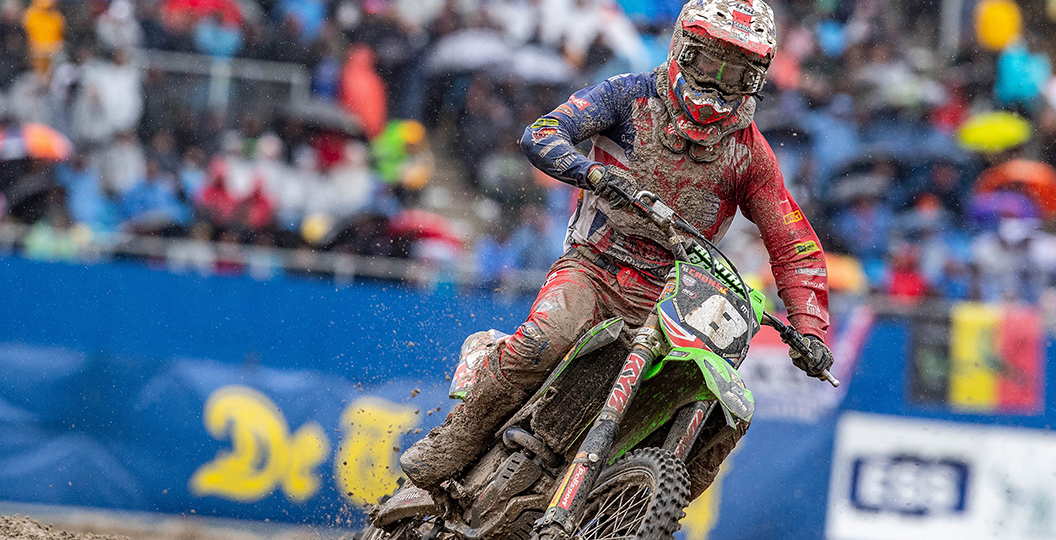 Adam Sterry was heartbroken when Team Great Britain for the 2019 Motocross of Nations was first announced, as he missed out on a spot. Who would have thought at that point that he would be stood on the box at the Assen TT Circuit in a little over a month? Sterry eventually got the call up and delivered the goods on the day, as his strong second moto played a huge part in getting his nation into third overall. Sterry recounted his first MXoN experience in his MX Vice interview.

MX Vice: You came here with one goal: Finish on the podium as a team. You did that. It was not looking good after the first moto. I feel like as far as first motos go, as a team that was one of the worst. You pulled it off in the end. I guess you are stoked.

Adam Sterry: Yeah, sure. Like you said, I’m lost for words at the moment. What a way to finish my MX2 career. I got cleaned out by [Gautier] Paulin on the first lap of the first moto and then I made a big crash myself and it took ages to start my bike. Nathan [Watson] went out as well, so I knew that was two bad results. Looking at everybody else’s scores after the first moto, it wasn’t too bad but obviously not ideal.

I thought we threw it away, but luckily me and Shaun [Simpson] did great results in the second race. Those two boys pulled it together for the third moto too. Big congrats to them. Before you ask any more technical questions, I’d just like to say thanks to the whole F&H team for the last two years. They went above and beyond for this race for me. Thanks to Mark [Chamberlain] for the opportunity. Thanks to Shaun and Nathan as well, because they did a great job today. Couldn’t do it without them.

Were you guys stressed and freaking out after the first moto? There is a lot of pressure on you then because you basically cannot f**k up.

Yeah, exactly. I knew that we were going to have to throw away Nathan’s result, so that meant my twenty-third or whatever had to count. It meant that we only had to do good races from there on, and we did. I’ve never been so nervous watching that third race in my life. I was more nervous watching that race than before my own race, because we were second by a long way and then we dropped to third. Then France were coming. They were coming and they were coming. They overtook us.

Then I was unbelievably gutted, because as you can imagine I finished fourth three times already this year. I thought, “Not again, surely.” Luckily, I feel like I had some luck for once. I was so happy when I saw Paulin pushing his bike down the side of the track. I was in the Sky Box. Everyone had me on the floor. They were dragging me. Jumping up and down and hitting me. Unbelievable. I started crying. Very emotional.

I just figured it out. Paulin’s bike breaking was karma for him taking you out in the first moto. It got him in the end.

That’s exactly what I was thinking as well in the press conference. I don’t really believe in that stuff, but it is what it is. We’re on the podium. Definitely the best day of my career so far.

I feel like your second moto was better than maybe people will realize. You finished twelfth but you weren’t there the whole time. You actually moved up to get there.

Yeah, exactly. I got put on the outside for the second moto. It’s not ideal against 450s. Jago [Geerts] said in the press conference that it being muddy brought the 450s and 250s closer together, but I completely disagree. I think it makes it worse. I felt there were some people overtaking me that I never heard of in my life and I was thinking, “They have got to be lapped, surely.” It was just because they had the 450 power they were pulling out of the corners and it made a big difference today. It was tough… Very tough. I like the mud. 2016 here, that was the most gutted I’ve ever been after a race. Today for sure made up for it.

Why did you go outside in the second moto? I don’t like that decision.

How happy is the fake Team GB manager, Marc de Reuver? How happy is he and also how much of a hard time has he been giving you this weekend?

After yesterday and the first moto, he wasn’t very happy. I can tell you that. Obviously, he likes Holland and he’s for Holland to win. Cheekily he was helping me and Team GB. He’s been with us all week. Me and Marc, we have worked together one and a half years now. I need to say thanks to him as well. He’s put an awful lot of effort in the last one and a half years. He did a great job. He really helped Nathan with his starts this week. Nathan had not started from the mesh after so long and he really helped him.

We did so many starts on Wednesday. We aimed for the podium – that’s what we got. Thanks to him for the last one and a half years. I also want to say thanks to everyone that helps. All my sponsors. Rich [Mike Jones]. He’s about to take a flight, but he’s been a big part of my career ever since I was six years old. Massive thanks to him. Marc’s been my trainer for the last one and a half years, but Rich has always been there in the background supporting me. It’s been an emotional ride. This is definitely the best day of my career so far.

Was this Motocross of Nations thing everything that you wanted it to be and expected it to be? Were the fans as crazy as you thought they would be? Was the excitement there? Was it just what you pictured in your mind?

Definitely. This is even more crazy than I expected. I knew there would be a lot of British people coming here, because it’s quite close to the UK. Everybody likes it when they can travel and it’s an excuse for a holiday. The support I’ve had all weekend has been unbelievable. It’s above and beyond what I expected. To finish it off on the podium, like Shaun said, after the race we were all like little babies. We were all literally hugging each other and crying.

It just shows, because Shaun has also been at it a very long time and this is his first time getting on the podium. I didn’t know that. I only just found that out. He was emotional. For Nathan, last weekend he was in an enduro at Hawkstone going up hills and avoiding trees. That just shows what an incredible rider he is. I think today was a little bit more towards enduro. Big props to him. He did a fantastic job and showed what a great rider he is.

We cannot say too much, but things are looking more promising for a ride next year. In Sweden we were talking about maybe starting an AS811 team. It’s not going to come to that.

No. It’s not sorted yet, so you can never say never in motocross. Hopefully it doesn’t come to that. Hopefully in the next couple weeks I can have some news about what’s happening. I’m just going to let my hair down now, get a double vodka and Coke and see where the night takes us.