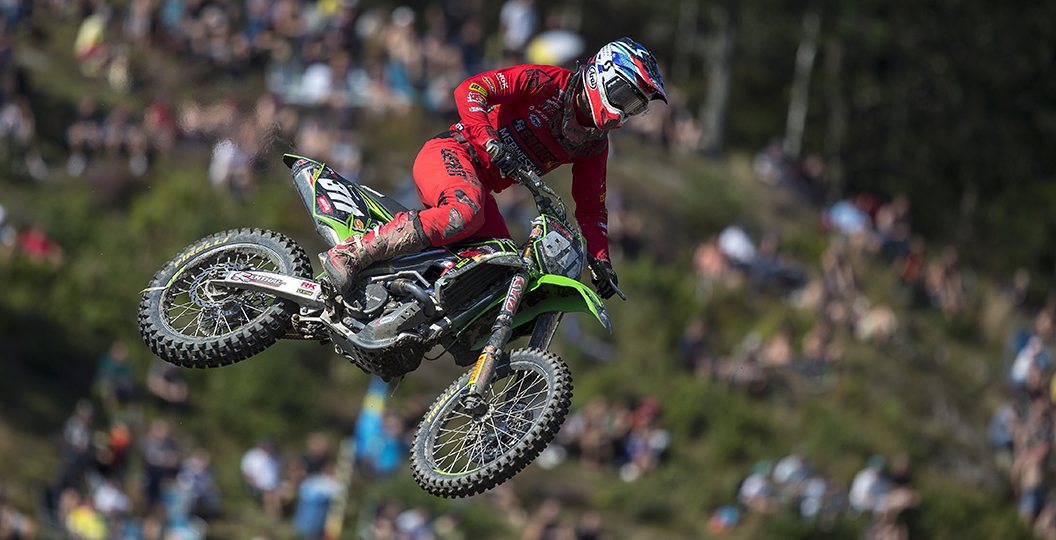 Adam Sterry is going from strength to strength in the MX2 class at the moment, but time is running out to get that elusive podium finish. Sterry is familiar with finishing in the top three in the motos at this point, so that is a step forward, but has yet to taste champagne on the world stage. Is frustration starting to creep in? What is going on with the Motocross of Nations team? All of that is discussed in this exclusive MX Vice interview from the Grand Prix of Sweden.

MX Vice: Another great weekend, but I am guessing you are not overly stoked. You could have had a podium and even a moto win. I don’t know how you feel!

Adam Sterry: Sure. Coming into this weekend I had my first European race win here, so it’s a little bit similar to the Czech Republic. I really like this place. I was looking for a good result. It was one that I thought I could definitely podium at, like you just said. In the first race I was fifth. I didn’t make a good start, coming from ninth to fifth. In the second race I made a better start and was in third.

I passed to second and followed [Tom] Vialle. We pulled a big gap, actually. I was riding really comfortable behind Vialle, but maybe a little bit too comfortable. The shadow from the board… I was taking the outside line when I jumped and the shadow was there, then either the rut broke or I just missed it with the front wheel and ended up going down.

[Calvin] Vlaanderen was in front of me and I needed to pass him for the podium, so I went all in and made another mistake. Again, I kind of threw it away myself. Only me to blame on that one. I saw the moto win there. They are little and few to come by these days, with Prado being so dominant. I was so easy behind Vialle. I wanted that moto win. I made a mistake. It’s happened now. We are fourth again and have got two more GPs to not finish fourth.

Like Loket, I guess you are good around here because of the traction. There isn’t full traction, so you have got to kind of move with the bike and don’t know what it’s going to do. Like you said, that is where you are strong.

Sure. I’m a little bit of a weirdo actually. I don’t know why I like tracks where there is no grip, like the Czech Republic and here. When it’s that stony and slippery stuff, when the bike’s always moving, I really like it for some reason. When there is perfect traction, I don’t really like it. That is why I like riding sand as well. The bike is always moving. There is loads of stuff to focus on, so it’s difficult and technique. I don’t know why I like it, but that’s just what it is.

Anything you would change about that second moto then? I guess just wait behind Vialle for a little while longer?

Yeah, sure. To be fair, I didn’t crash because I was trying to pass him. I was just staying behind him. I wasn’t close enough to pass him. I was maybe one second behind him. It was just a mistake on my behalf. I think maybe because I was so comfortable behind him… Maybe I lacked concentration? No regrets. It’s happened now. I have to be happy with how I rode. I rode solid all weekend again. If a little bit of luck went my way, I could have been on the podium. It is what it is. Now we have been fourth three times.

What was going through your head when you were chasing Vialle? Like you said, it was coming easy to you. You were comfortable. A split second before you crashed, I messaged someone and said, “Sterry is going to win this.” It was visible that you kind of had it in you.

Yeah. I was comfortable and riding easy. I thought, “This can be a moto win.” It can change in a split second. Especially when you ride these conditions with so many stones, shadows, [you are] sliding and the sun is there. It’s a lot easier to make a mistake rather than when it’s perfect grip. There are plus sides and down sides, but like I said I have to be happy with my riding.

It’s been such a good weekend for the team as well. Unfortunately, it is bittersweet because of Henry [Jacobi] also. I missed the podium, but Roan [Van De Moosdijk] is the European champion. We are like a family, so I’m proud of him for that. He rode super good all year and really deserved that title.

To be fair, with anything in life I’m always… After the race, I was super pissed. If you came within the first thirty minutes after the race then I was really annoyed at myself, especially because I threw it away this time. This is the third time I’ve been fourth. It could have easily been three times on the podium, but what can you do? It’s happened.

I always say, “What’s the point of worrying about it now?” It’s happened. What’s the point of being annoyed all afternoon and annoyed for the next week? What’s the point? There is no point in that. Just need to move on. We have got two GPs and two more opportunities to get that final MX2 podium that I’ve been trying to get for the last four years.

Mark Chamberlain is here. Obviously, you are riding well. You are literally our only MX2 rider now. We have no one else. What is going on? It’s not confirmed. I don’t know what you need to do. You didn’t get on the podium, so maybe that would have helped? Do you know what’s happening? What is happening? I’m very mad about this!

Me also. I just spoke to Mark, to be honest. Either way, barring no injuries, I’m on the team. It’s not official, but I can start making progress for that. That I’m really happy about. I don’t know what bike I’ll be riding, but hopefully a 250 as that’s what I’ve been riding all year and I’ve got a good bike. We’ll see what he decides. I couldn’t be any prouder and happy to represent Team GB at Assen, if I get there with no injuries. That’s an if, because there are two more races left. You never know. I have been riding good all year, so I think I deserve the spot anyway. I think today even more so proved that I should have that 250 ride.

Note how he said, “Hopefully a 250.” Finally, next year, anything happening? Any more talks? I guess this helps, or does it? I don’t know. Vlaanderen needs a ride and he won the moto. He has got nothing either. Do results even matter at this point?

Yeah, you would like to think so. Like you said, Vlaanderen has nothing. At the moment I have nothing. The teams are getting fuller by the second, so even my options are getting less and less. I can only just keep focusing on what I’m doing. I’m speaking to people, but to be honest there is really not much progress. Maybe next year you’ll have to see the AS811 race team making an appearance? I don’t know. I hope it doesn’t come to that. It is something that I would do, but hopefully I’ve proven that I’m good…

Wait, it is something you would do?

Yeah, sure. What else am I going to do? I’m not going to retire, am I?

Yeah but GPs or an AS811 team in Britain? Would you actually go that far with it and travel to… Argentina would be a bit tough in that situation, but Valkenswaard and all of those places?

I haven’t got that much money but if people would like to help and if it gets to that point, then that’s something I would do. Honestly, I feel like I can ride a 450 so much better. It’s a new challenge. We haven’t got to that point yet, so I don’t want to… That was a bit of banter, but I still have no official offer. It’s getting to the point where there are only two races left now. I hoped I would have had something solid by now.

At the moment I have nothing. Hopefully I can sort something and if not, like I said in the other interviews, I’m not worrying about it. I’m only trying my hardest at the weekend. What can I do about it? I’m enjoying it. I enjoy coming to the races. I think I can do even better on a 450, like I said. My weight, size and how I ride is much better for a 450. That’s it.