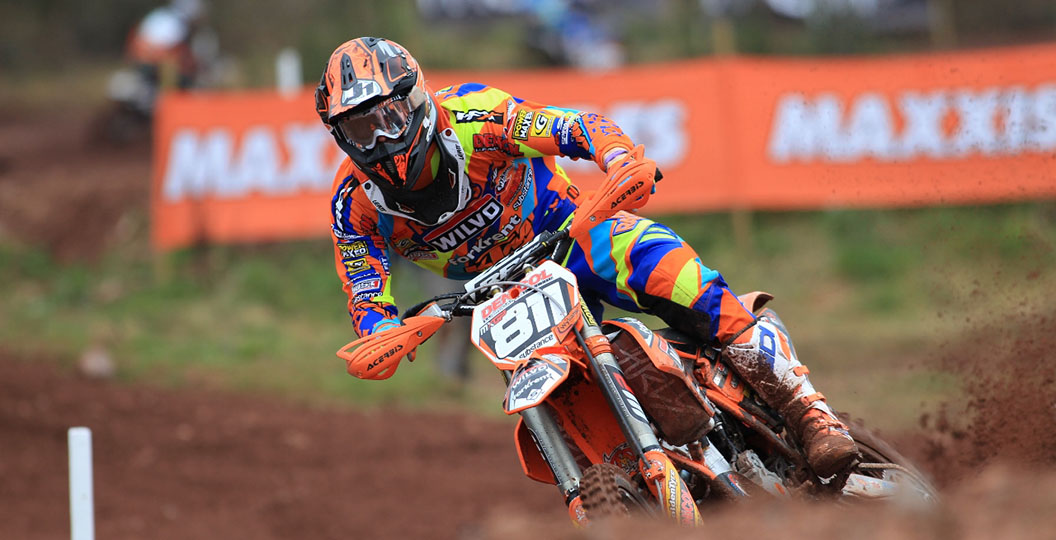 Wolverhampton (UK), 17 March 2015: Hilton Park just off Junction one of the M54 marked the venue for the opening round of the 2015 Maxxis ACU British Motocross Championship. The Hilton Park circuit was a new venue for the championship, and with a short lap time, getting a good position in qualifying would be vital for both Wilvo Forkrent KTM riders Adam Sterry and Steven Frossard.

Qualifying:
Morning practice and qualifying saw both classes setting a very fast pace around a tricky circuit that was soft in some places, along with some rocky sections. In the MX2 class Sterry produced a number of fast laps to finish third fastest, just 0.3 of a second off pole. In the MX1 class Frossard quickly settled into the track and finished the session third fastest behind Shaun Simpson on pole and Brad Anderson.

MX2 Race 1:
Following the short lunch break it was time for the first MX2 race of the season and as the gate dropped, Sterry rocketed his KTM into the early race lead and was looking strong in the opening laps. At just under ten minutes the race was red flagged due to a crash involving Mel Pocock which left the youngster with a serious hand injury.

After a long delay a full race restart took place and once again Sterry produced a great start to lead the race ahead of Ben Watson. The pair battled it out for the whole race and soon pulled away from the rest of the field. As the race progressed Sterry made a slight mistake and Watson was able to take the lead. Sterry continued to push Watson hard and came close to reclaiming the lead but had to settle for second place at the line.

Unfortunately for Sterry and the team, following the race the 18-year old was handed a 10 place penalty for failing to slow down enough under a waved yellow flag. This unfortunately left Sterry down in 12th place and very disappointed going into the second race.

MX1 Race 1:
In the first MX1 race Frossard made a strong start down the straight and was in the top three at the first turn. After rounding the corner a rider just to the side of him had his bike back end step out which hit Frossard knocking him off his machine and taking a number of other bikes down at the same time. After picking himself up and remounting it was evident he had injured his hand which meant he was forced to retire from the race and the event.

MX2 Race 2:
Due to the earlier delay the meeting was cut down to just two races per class. In the second MX2 race Sterry took the holeshot once again and the early race lead, however it was to be short lived as on the second lap Sterry got a rock caught in his chain dislodging it and jamming the chain between the front sprocket and the swing-arm. The incident disappointingly ended the Wilvo Forkrent KTM team’s day early.

Commenting, Adam Sterry said: “Qualifying went alright but I made a few mistakes on my fast laps so I was happy with third place as I was able to see where Watson and Lenoir went on the gate. In the first race I hugged the inside round the first corner and was leading and riding well until the half way point when the race was red flagged due to the injury to Mel Pocock who I wish all the best to in the coming days and weeks.

“In the restart I was leading once again but Ben made a move on me at the halfway point. I was happy to follow him for a few laps and mount a charge at the end which I did but one of the best passing points was the whoops and I just couldn’t do anything there because of the yellow flags. Following the race I was docked ten places which makes no sense when Ben and I were going at the same pace through the section. I feel unfairly treated and can’t understand how the Clerk of the Course could possibly justify his decision to only punish me. To top it, I was then leading in the second race when my chain came off and got stuck in the swing-arm meaning a DNF to finish the day off.”

Adding, Team Manager Steve Turner, said: “We’ve had a horrendous day today. Adam was really fast and he and Ben Watson were the class acts throughout the day. Obviously he had some bad luck in race two which is hard to take, but not as hard as being put back ten places by the Clerk of the Course who penalised him for not significantly slowing down on waved yellow flags whilst taking no action against Ben Watson; despite them both clearly riding that section about a second apart and at the same speed as each other each lap. The good news is that Adam’s looking fantastic on the bike and really fast. Steven will travel back to France where he will have a scan on his injured hand and hopefully we will get some good news on that.

“I must add that all our bad luck pales into insignificance when you think about the horrific injury to Mel. I can only pass on the team’s best wishes to him and his family and wish him a speedy recovery. The whole paddock is rooting for him!”