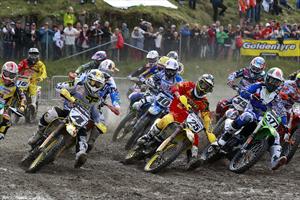 The FIM Motocross World Championship fires back into life after a small break with rounds 10 and 11 back-to-back and an interesting trip east across the continent for Rockstar Energy Suzuki World MX1.

Clement Desalle – as leader of the premier MX1 class and winner of the previous event in Sweden – will front the ‘yellow’ line on his factory RM-Z450 as the team head to Kegums for the Grand Prix of Latvia this weekend and then straight to Semigorje for the circuit’s inauguration hosting the second Grand Prix of Russia this century.

Desalle, recovering from sickness this week, was able to reflect on an extraordinary meeting at Uddevalla almost two weeks ago in which the Belgian captured a double moto win and his second overall triumph of the season. The 23 year old not only walked the top step but felled a 47 point deficit in the standings in one swoop to grasp the red plate and top the world as the second half of the campaign begins in earnest.

“It was an idea to come into the season with a steadier approach and build up to this,” he said. “OK, we were very lucky to come away from Sweden with the red plate and for sure it was unexpected but I was happy enough with the victory and we have been doing good work inside the team to arrive to that moment.

“Now the plan is to continue giving my best. We still have 14 motos left this season so there is plenty of racing to do. Antonio Cairoli had bad luck in Sweden but then so have I on a few occasions, like in Brazil. It is part of motocross.”

Kegums entertains the Latvian round of the calendar for the fourth year in a row. The mostly flat layout boasts some spectacular jumps and an interesting cambered wave section. The terrain mixes loose and hard-pack elements although with the long-term weather forecast predicting two days of rain over the weekend it is likely to get rough, rutted and slower. “I like Kegums even though I have not had much fortune there. It is a rough, fast and physical track but can be pretty good for racing,” says Desalle who came close to victory in 2009, captured first place with the RM-Z450 in 2010 but then was struggling for fitness 12 months ago.

Tanel Leok will enter home ground of sorts with the customary legion of fans making the trip from nearby Estonia to support the former Grand Prix winner. “Kegums is not one of my favourite tracks because it has become a lot harder compared to the soft loam it used to be but the event itself is really nice and of course it’s great to have many supporters there. I feel good physically so with a couple of decent starts I hope can do something special.”