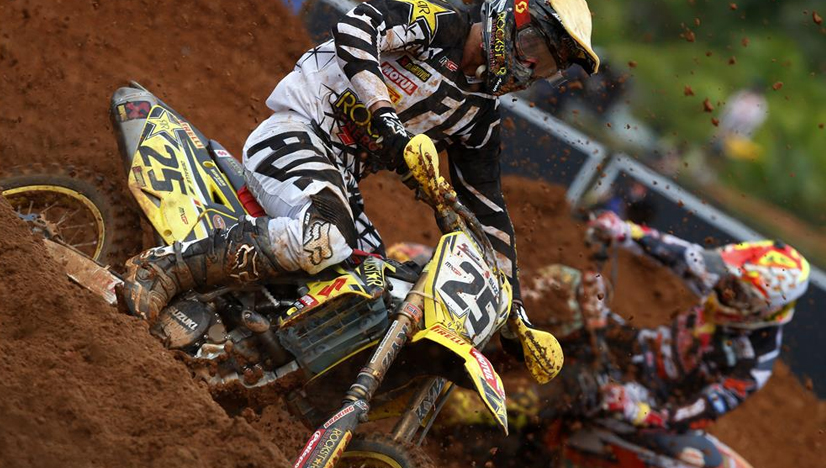 The Grand Prix of Brazil and the third round of 18 in the FIM Motocross World Championship was a positive one for Rockstar Energy Suzuki World MXGP as Clement Desalle celebrated his second podium result of the season in front of 35,000 spectators at Beto Carrero.

The first of two outings in Brazil this season took place at the facility annexed from the popular theme park for the third year in a row. The small and narrow layout was again surrounded by a noisy and boisterous crowd. The gathering added that typical Brazilian flavour found at motorsports events, all in spite of an overcast sky and some stuffy air (temperatures touching 30 degrees with high humidity).

Desalle flew his RM-Z450 to third position in the opening moto and held-off the attention of Max Nagl in the last two laps for arguably the hottest battle in the race. The Belgian was again at the front of the pack in Moto2 and although he could do little to prevent Antonio Cairoli to demote him to third place, his consistency delivered the runner-up position overall and his second trophy in as many Grands Prix.

Fresh from sealing his second Pole Position in three Grands Prix, Kevin Strijbos endured some drama in the first moto when his goggle lens popped out and he had to pit for a new pair. Towards the end of the race the Belgian suffered some arm-pump and claimed 13th position at the chequered flag. The second moto was better for the 28 year old and although his sixth place was an improvement and better haul of points, Strijbos still felt below par with his performance and potential and ended the day with eighth overall.

Desalle is now fourth in the MXGP standings with a 31 point deficit to Antonio Cairoli at the top of the table. Strijbos holds sixth after three races and is just 38 away from Desalle.

The Belgian operation will pack the travel crates for the last time (until the second visit to Brazil in September for the penultimate round of the series) and head back to Lommel where a free weekend will precede back-to-back trips to Italy (GP of Trentino at Arco di Trento) and Bulgaria.

“I’m on the podium with no crashes or injuries, so these are the positive points. It has taken a lot to come back from my shoulder injury so I am happy with how some things are going. It was hot out there today and easy to make a mistake. It was not difficult to ride but you had to be measured with the 450 out of those corners. I’d like to say thanks to the team because they have worked really hard in the past weeks to try and improve.”

“Today was for sure not what I was expecting. The front wheel grabbed too much air out of the gate of the first moto but despite the bad start I had some good lines and could pass a lot of people. After five laps I had some arm-pump and at the same time a rock hit my goggle and the lens popped out. I had to pull into the change because the race was not even half over. In the second race I had a better start but just ended up riding a rhythm that was not that good. I couldn’t push because if I did I knew my arms would flare up. Sixth was better than 13th and I know I can do much better. I need to sort out my arms and I might go to the hospital this week. I’m pretty down at the moment and need to clear my mind for Arco.”