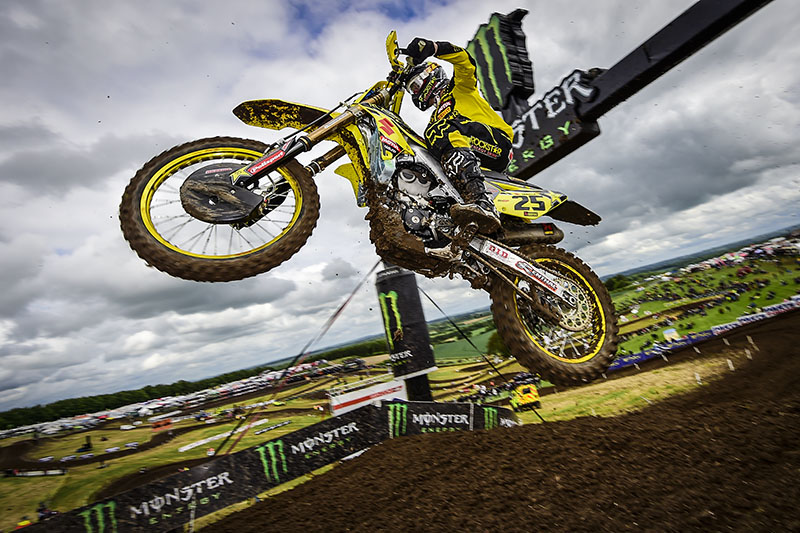 Desalle and Herlings on top!

MATTERLEY BASIN (Great Britain), 24 May 2014 – Overnight rain and thick cloud cover added a new dimension to the otherwise glorious circuit here in Matterley Basin for round eight of the FIM Motocross World Championship and rounds two and three of the European EMX150, 250 and 300championships.

Meanwhile the first stash of European EMX race points for the round of Great Britain has been dished with British riders sweeping all three classes. Taking the first win for the Brits, local two-stroke legend GL Racing’s Lewis Gregory won the EMX300, while British youngster Albie Wilkie won the EMX150and Hitachi Construction Machinery UK KTM’s Ben Watson made it three from three for the British riders with his win in the EMX250.

Rockstar Energy Suzuki World’s Clement Desalle has clearly found his mojo over the last few weeks. The Belgian, who has every intention of chopping back Red Bull KTM Factory Racing’s Antonio Cairoli’s championship lead, looked flawless out on the technically challenging circuit today, taking the holeshot and completely checking out to take his first qualifying heat win of the year.

Hitachi Construction Machinery UK KTM’s Shaun Simpson got off to a mega start only engaging in a brief duel with J-Race Racing Team’s Joel Roelants on the first lap of the race. While Roelents did mange to take second a few corners in, it was short lived when he cased the step up half a lap later and dropped back to third. With Desalle pulling away out front, Simpson rode his own race to bring home a solid second, while Roelants rode 99% of the race in a sturdy third. A last minute charge from Red Bull KTM Factory Racing’s Antonio Cairoli who was riding with a ache in his heart yet an angel on his shoulder after the loss of his father one week ago, saw him put in a heroic performance and move into third with one corner to go.

Meanwhile Monster Energy Kawasaki Racing Team’s Steven Frossard hounded the fan favouriteCLS Kawasaki Monster Energy MXGP’s Tommy Searle for the entire race to finally make a move that stuck with two laps to go. With Frossard rounding out the top five, Searle who may be lacking race fitness after his six round hiatus eventually dropped back to seventh with TM Ricci Racing’s Tanel Leok pushing past on the last couple of laps to take sixth.

Rut city didn’t phase Red Bull KTM Factory Racing’s Jeffrey Herlings as he followed the holeshot master KTM Silver actions Jose Butrón around turn one to have the lead already by turn two. While the Flying Dutchman checked out to take his third qualifying heat win of the season and first at a Grand Prix of Great Britain, a ton of young throttle twisters engaged in an eventful battle for second.

CLS Kawasaki Monster Energy’s Dylan Ferrandis was dropping hammers right out of the gate. The young Frenchman managed to move in to second three quarters of a lap in, but ended up hitting a slick spot on the landing of the step up which left him on the ground and dropped him back to sixth. The first to take advantage of Ferrandis’ fault, KTM Silver Action’s Jose Butrón moved through to hold onto second for the first few laps. Contact with Standing Construct KTM’s Valentin Guillod forced the Spaniard to roll the Athena Get step down which in turn allowed both Guillod and BikeIT Yamaha Cosworths Max Anstie to go through.

With the crowd in behind him, the local kid Anstie managed to make a nice pass up the inside of Guillod and charge away. Meanwhile Guillod and Butron continued their game of cops and robbers which resulted in Wilvo Nestaan Husqvarna Factory Racing’s Romain Febvre catching up to make it a late race three way.

Three laps to go in the compelling challenge for the second best gate pick, the skies opened up and it started to pour. Anstie, who at one stage was running a comfortable second, ditched his goggles while Guillod and Burtón made a pair of mistakes each to drop back to sixth and seventh allowing CLS Kawasaki Monster Energy’s duo of Dylan Ferrandis and Arnaud Tonus to move forward.

With two laps to go, Ferrandis was out to make up for his early race mistake charging like a bull at a gate for a goggle-less Anstie. With Ferrandis right on Anstie’s tail for second and Tonus and Febvre also close enough to pounce, it was a nail biter right to the finish. Devastatingly, Anstie made a slight mistake on the last corner allowing Ferrandis to go through for a hard fought second while Anstie, Tonus, Febvre, Butrón, Guillod and local star Hitachi Construction Machinery UK KTM’s Mel Pocockrounded out the top eight.