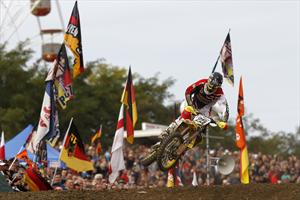 The Belgian had already confirmed his status as ‘#2’ at the previous round in Italy two weeks ago but was one of the protagonists again and celebrated another champagne toast for his 10th trophy from a possible 16. Tanel Leok signed off a campaign in which he scored points in all 30 GP motos with 13th place and eighth overall in the MX1 series.

More than 40,000 spectators travelled to the traditional home of the Grand Prix of Germany and the same demanding hard-pack was in place. The off-cambers and twisty layout proving difficult for overtaking and pushed the lap-times close together. Desalle – still not 100% in race trim due to the impact he sustained on the back of his right hand – made two reasonably good starts and vied for positions inside the top five of both 35 minute and 2 lap motos.

He was not able to reach the rear wheel of Antonio Cairoli in Moto1 but by finishing second, posted his best race result since the GP of Czech Republic at the beginning of August. In the second sprint, Ken Roczen leapt away in second place and Desalle had his hands full demoting Max Nagl, which he managed to do for a lengthy phase of the race but ultimately missed out on third spot to the German.

Tanel Leok lamented a set of starts that gave the Estonian a lot of work. He couldn’t be decisive with his overtaking in the opening moto and was frustrated to reach the line in 11th. His second attempt was ruined on the third corner when he clipped the inside of the turn and tipped off the Suzuki at low speed. Another mishap and a moment when he needed to stop to dislodge a stone from his brake were further obstacles. Leok took 15th for 13th overall and is able to look back on his first season where he listed points in every single race for the first time. The former GP winner can rue some poor luck at the beginning of the year when a pre-season leg injury affected his race condition for the first half of the championship.

Rockstar Energy Suzuki World MX1 can already look back on a successful season in which eleven podium appearances included two victories by Desalle, and Leok was able to climb the box on one occasion also. The FIM Motocross World Championship may well have ended for another term but the team will make the very short journey from its base next week to the sandy Lommel circuit where Desalle (Team Belgium) and Leok (Team Estonia) will wear their country colours for the 66th Motocross of Nations.

“I had some fun today and my riding was better than in the last few GPs. It has been difficult with my hand and my doctor told me it would take six weeks. Overall it has affected my training and it has meant slowly, slowly I’ve been getting better on the bike. In the first moto but Max and Ken made mistakes and I was able to finish second and in the second I made a mistake myself and Max was able to pass me. It was really difficult to pass on this track but I did my best. Second in the World Championship is not so bad but for sure my team and I want first place like every rider here. It has not been an easy year off the track and there have been some sad moments and that has affected my riding, so to finish second is OK and we’ll look for improvement next season.”

“It wasn’t the greatest Grand Prix for me. In the first race I had the speed but I could not make the passes happen. It was difficult out there. In the second race I crashed on the third corner, crashed again and had to take a stone out of the brake, so not good. I scored points in every race this year and that is something positive I will take from this season. It is just a pity about the injury at the beginning. In my head I know some things I could have done better but now it is too late.”