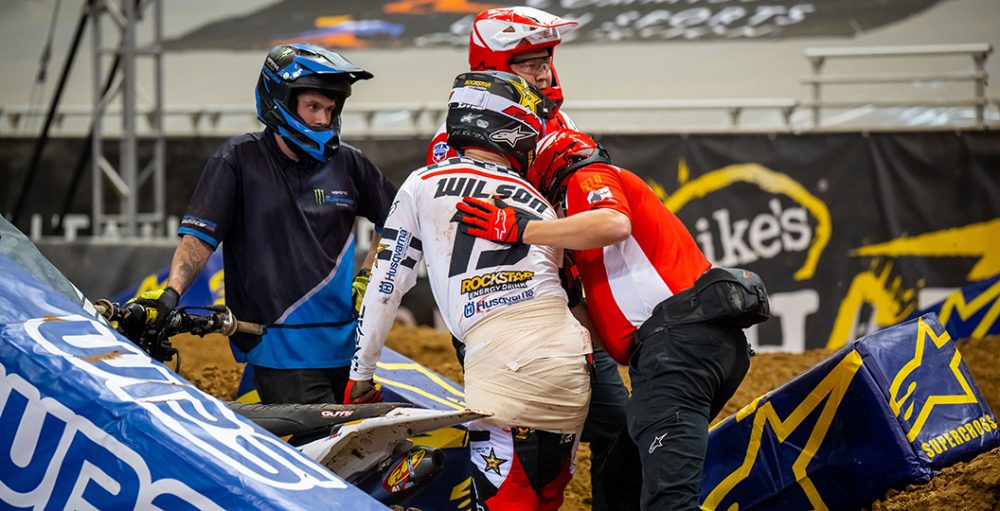 There has not been much news about Rockstar Energy Husqvarna Factory Racing’s Dean Wilson since he crashed out of the first main event in St. Louis, Missouri, on Saturday night. Wilson has just revealed the extent of the injuries that he suffered in a social-media statement though – that’s been transcribed below. Two surgeries have been done on the laceration on his butt and one more is required, then he hopes to exit the hospital by the end of the week.

“Not the report that I want to be making. In the first race of the night for me, on the second lap, I went through the whoops and was in like seventh or something. My rear wheel just hit like an edge and shot me left. I was going pretty fast into the whoops and it just shot me into the bales, then I hit this little wall thing. I hit this wall and had to kind of eject from the bike. I was laying there – I hit pretty hard – and then I just felt like really warm. I look down and I was just laying in a pool of blood. The Alpinestars [Medial Unit] crew did a good job, came on the track and bandaged me up as best as they could.

“I think what happened was as I was going towards the wall, I ejected from the bike and my ass just went right into the foot-peg. I got a laceration that was like ten inches deep – the doctor said she could put her whole hand in. We got to the hospital and I had five doctors playing with my butt. Cannot say that I have ever had that before! I went for two operations that night and then I have another operation tomorrow, so kind of a weird injury. I have never had it before. It sucks big time and that is where we are at. I pretty much made myself a second butthole. It’s very uncomfortable and throbbing – I’ve been laying on my side for the past thirty-six hours. It’s miserable.”

Wilson is still eighth in the championship standings, despite scoring just one point in St. Louis, but his status for the remaining four rounds remains uncertain. Rockstar Energy Husqvarna Factory Racing will continue to be represented by Malcolm Stewart in the 450SX division in 2022 Monster Energy Supercross.