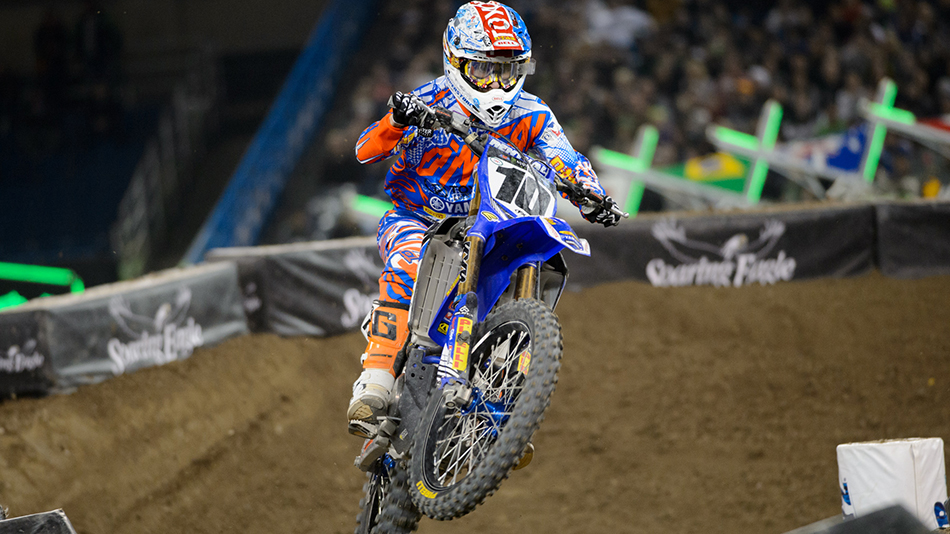 Well, another week has been and gone, so, here is another edition of the MX Vice ‘Weekly Wrap Up’. It has been a packed week of action for our sport, as multiple riders have sustained injuries, whilst others are set to make a return this weekend. Elsewhere, some guys are jumping over to different teams – it’s all going on at the moment!

Steven Lenoir had a pretty good start to the year, aboard his Dantec Husqvarna UK machine. The Frenchman was a contender for wins in both the Maxxis British Championship, and the MX Nationals. However, he has been forced onto the sidelines now, following an incident at Lyng. Steven slipped off in the corner (it was not a big crash, at all) but caught his arm on a rock, which ripped it open. Lenoir had surgery earlier this week, and thankfully, everything went well, and his tendons are intact. He will now begin his road to recovery – it seems like it is going to be around a month before he is back on a bike.

Martin Barr may be riding the best that he has done in quite some time. However, he has not had a chance to show it yet, as he keeps getting struck down by injuries! Martin dislocated his shoulder at Lyng, in a freak incident where he did not even crash. Obviously, this ruled him out for the day; it is unknown whether he will miss any of the upcoming rounds. The Irishman went for a scan today, so we will know more soon.

The JGR Yamaha team has had a tough time of it, as of late. Both Justin Brayton and Josh Grant succumbed to injuries in Houston, and will be on the sidelines this weekend. Brayton was already dealing with some niggling injuries (like a broken bone in his foot), following St. Louis. However, a fall in practice at Houston meant that he hurt his hand and knee, as well, so he will be not be on-track in Seattle. Grant crashed on lap one of the Houston main event, and beat himself up too; his injuries warrant a recovery period, so he will miss Seattle.

With both Brayton and Grant on the sidelines, the JGR Yamaha team are in need of two riders to represent their sponsors  this weekend. So, Phil Nicoletti and Vince Friese have stepped up for Seattle. Nicoletti was signed to fill this role pre-season, so it is unsurprising that he will be on the team. But, you may be a little shocked to see that Friese will be beneath their tent, seeing as he has been on a Honda all year. However, his current team is not going to Seattle, so the only way that he could race was to take up this deal, which he did.

Undoubtedly, some of the biggest news to come out of the world of motocross this week is that the RCH Suzuki team have signed Weston Peick for the outdoor season. Peick will be replacing Hill, who did not meet his contract requirements in the Monster Energy Supercross season. This is a great opportunity for the longtime privateer, as he will finally have a chance to show what he can do on factory equipment. It is presumed that this summer will act as a audition for the 2015 season, so he has to perform.

It seems that most have forgotten about Tyla Rattray, but the likeable South African will make a return to the FIM Motocross World Championship this weekend aboard his Husqvarna. Although he is one-hundred percent healthy now, Tyla has admitted that he will not be in a position to fight for the lead this weekend. However, he expects to be battling at the sharp-end of the pack by the time the series arrives at Valkenswaard. Rattray has only ridden his 350 twice in the lead up to the GP of Trentino, so race fitness will be an issue for him, undoubtedly.

The 2014 Monster Energy Supercross series will head to Seattle this weekend, for round fifteen. The soil will be a huge factor, as per usual, as it should be a soft, rutted and treacherous. For this reason, there is a chance that the results could be shaken up a little bit. There is a chance that Ryan Villopoto could clinch the 450SX title this weekend, in front of his home crowd. However, a certain scenario would have to play out.

Most eyes will be on the 250SX West class, as Cole Seely will be hoping to be chip away at the eleven point gap that Jason Anderson has over him. Cole has enjoyed some success in Seattle in the past, whilst Anderson may struggle if conditions are sloppy. So, it is going to  interesting to see how the class plays out, especially considering that it is the penultimate round. Of course, there is a large group of riders that could get in between the title contenders, too!

The FIM Motocross World Championship will return to Europe this weekend, as the fourth round of the series will take place at the scenic track of Arco di Trento. The slick, hard-pack track will be the site of Jeffrey Herlings’ return – there is no reason to think that the Dutchman will not return to his dominant ways immediately, as the injury doesn’t seem to have had an impact on his speed. Arnaud Tonus is the man that currently leads the series; the Swiss rider has a measly two-point gap over Glenn Coldenhoff. The track should suit Tonus perfectly, but don’t be surprised if the red plate changes hands on Sunday afternoon.

In the MX1 class, Antonio Cairoli is expected to continue his win-streak; the support of the home crowd will undoubtedly make him even more of an unstoppable force. Gautier Paulin should be one of the riders that thrives in the conditions, but it is unlikely that he will be in a position to beat the series leader straight up. Clement Desalle is still building on his speed, and fitness; he should be making small gains each week.

The second round of the Australian Monster Energy MX Nationals will be held in Appin this weekend. Matt Moss (the reigning champion) currently leads the series by a measly two points over Adam Monea. There are a handful of title contenders that will be looking to rebound following a lacklustre round one – Jake Moss and Billy Mackenzie have a handful of points to make up. Alex Snow will take part in the event this weekend, so there is even more reason for the British fans to keep an eye on the results.