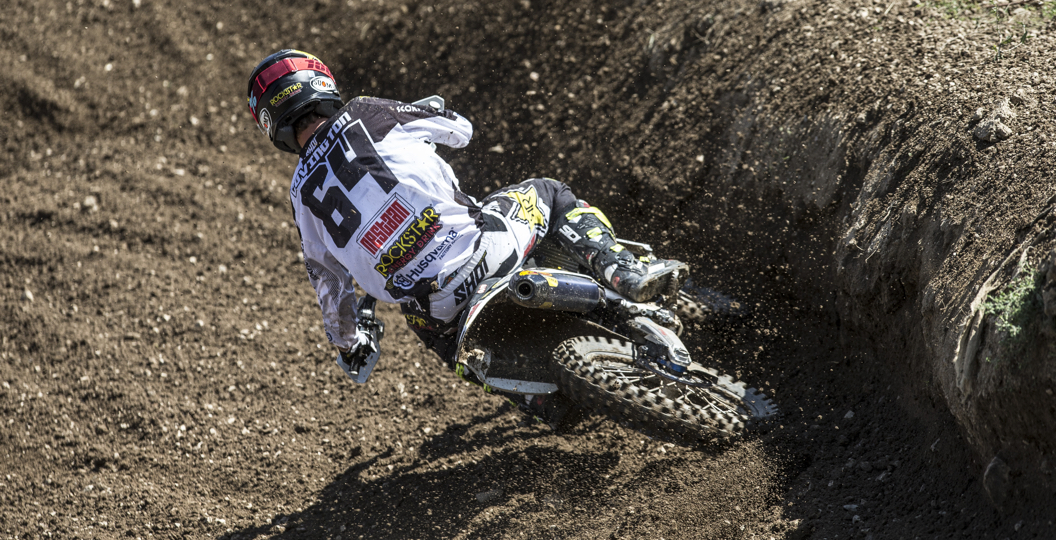 Thomas Covington has had an inconsistent time of it in the FIM Motocross World Championship, thanks to a variety of issues, but the potential that he has shown has generated a substantial amount of hype. The American once struggled to score points on some of the stereotypical European circuits, but has been a contender at each round and made it clear that he’ll be a force to be reckoned in the future.

MX Vice: We have kind of seen this before, right? One great moto and one not so great. I guess ultimately it came down to your starts?

Thomas Covington: Yeah, but really second moto was just bad luck actually. I came out of the gate and then tangled up my handlebars with a couple of other guys and nearly went down. I was trying to work my way back through the pack, but then I think two different times on the first lap guys crashed in front of me and I smashed into them. [There was] then one big one after you jump over from one side of the track to the other down in that left-hander, I just smashed into two guys and lost a ton of time. I was way behind. At that point I figured I wasn’t going to even make the podium, so I just tried to put some fast laps in. I got lucky and came out on the podium again.

I guess you were fortunate enough to ride up front in the qualifier and obviously that first race, so when you were at the back in the second moto you did not know where the passing opportunities were and how to get around the slower guys? You had to adapt to that as you go?

Yeah, I guess so. Most of the guys I got around pretty easily coming through the pack. Some guys gave me a little more trouble than others, as usual. I thought after the rain this morning the track had a lot more lines and it was a bit easier to pass. Yesterday it was almost impossible to pass – I stayed behind Prado almost the whole race. The track was a lot better after that rain.

I guess that helps you specifically, because as a faster guy with more talent you can push the limits a bit more and search for lines where the slower guys can’t?

Yeah, it is tough when the track is… I wouldn’t say easy, but everyone is a similar speed when it is dry out here. That’s what is really difficult here, because if you get a bad start it is hard to come through. Everyone’s kind of the same speed. Today the track was getting pretty gnarly. It was really tricky, as always, and it worked out well for me.

Tracks like this are the ones that people just think American riders are not going to be good on, as it is obviously typically European. Then the rain came, which again is something that people think Americans struggle with, so winning that first moto must have meant a lot? It shows you that you’re where you need to be heading into 2018.

Yeah, for sure. I’ve always struggled at the European GPs and it doesn’t get more old-school European than this! I was really happy with that. A little bit bummed about second moto, because I know I had a good shot at winning this thing. My speed was just really good all day. I had a lot of confidence going into the second one, just things don’t always go smoothly. I’m glad I was able to come through the pack.

Speaking of 2018, you obviously signed a one-year deal recently. Was that your choice to go one year? Obviously you want the option at the end of next year to either stay in Europe or go to America.

Yeah. Me and the team, we both agreed on it. Just a one-year deal. Kind of keep my options open for the year after that.

It sounds like you are going to ride for Puerto Rico at the Motocross of Nations. Do you know anything more, like who your teammates are going to be?

Was there any contact from Roger DeCoster about being on the American team? If not, are you a bit disappointed about that?

No, I haven’t heard anything from those guys. I’m not really disappointed, as if I was them I’d pick [Zach] Osborne in a heartbeat. He has been riding really solid. Also he rides good at Matterley, so he is kind of a no-brainer there.

There is a real shot that you guys could beat the Americans. You’re good around Matterley and Darian’s great around there as well…

It is kind of a weird situation, to be honest. That is why it was hard to get a third rider from the US. Everyone feels kind of weird about it. I wouldn’t be stoked to beat an American, to be honest, and, if anything, I’d want to help them if I could. At the same time, it would be cool to go out and win a moto or two at Motocross of Nations. It is a really cool opportunity.