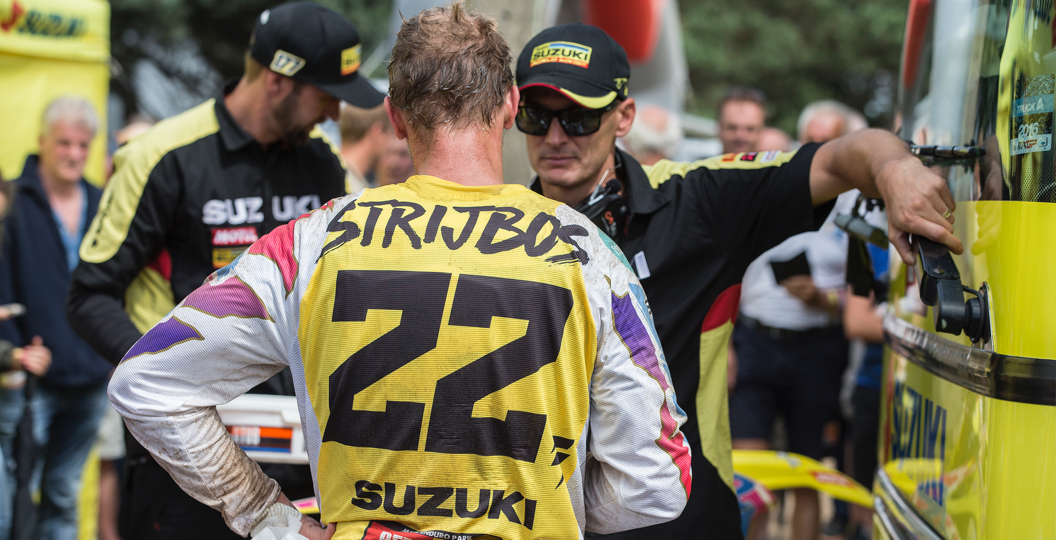 When Kevin Strijbos last won an overall, he was fighting with Marc de Reuver and Steve Ramon. It was that long ago! Now, just under nine years later, he has stood atop the podium again. Strijbos was one of the riders featured in the MX Vice post-race podcasts this week but, after such an amazing win, we thought we would also transcribe the conversation for your convenience.

MX Vice: Wow, two thirds for first overall and your first win since Lierop 2007! This came out of nowhere, so I am guessing that even you did not expect it?

Kevin Strijbos: No, for sure, because of the injury first of all I had a way to go and not too much bike time. I haven’t ridden this week also, because after Loket I had inflammation on my blisters. I could not hold the handlebars anymore. Maybe that was a good thing though that I didn’t have any expectations? In other years we have had a lot of expectations and it was sh*t. Now we just thought something like top five would be really good and everything went well, you know.

I did not know what I had, but was riding really well. In the first moto, behind Max [Nagl], I struggled a bit afterwards, but I came back. The second moto was then really good.

The team didn’t tell you that you had won the overall then? Was that maybe a case of trying to keep you calm?

I think so. I think the team know me really well and if I get stressed I ride tight. In the last two laps I made some mistakes, you know, and was pushing really hard. On the last lap they put it on the pit board that I had won the GP, so that was really special. Max crashed and I didn’t know where he was, but it is just an amazing feeling.

After Max had crashed, were you doing some math in your head to try and figure out where you were?

I did some math. I didn’t know where Max was, like I said, but I knew that two thirds was a podium. I thought that was fine. If I could have got my first podium, then that would have been really good. I didn’t expect the win.

How much does it mean to you just to get the monkey off your back and finally get another win? I guess it must have been frustrating for you each year?

Yeah, for sure. I think it is really good, but also for the next few rounds. I always try to win, but maybe try too much. Now that I have got the win, I hope that more will follow and that I don’t have to wait another nine years!

Does this one win maybe validate your decision to keep racing? Obviously you have been at this for a long time now. This proves that you can still do it though, so why not keep it going?

Yeah, let’s keep going! Next year I have one more year. My first year in GPs was 2001, so I am the old guy at the moment. I turn thirty-one this year, in the next few weeks, so I have one more year and then we will see what is going to happen. If I feel good I will try to do one more year, but if I get tenth or fifteenth place then I will know that it is time to stop.

Aside from the qualifying race, Loket maybe wasn’t the best for you and a lot of people would have put that down to a lack of fitness or race-time. You haven’t ridden in the week though, so how have you transformed into this just one week later? Is it just a case of you being more comfortable in the sand?

For sure, but also because we did not have any expectations. I think that is the main thing. I came to this race thinking that top five would be fine, then we would see. I then got a good flow and tried my best.

Next year is the last year of your contract then, but do you have any idea what you would do beyond that?

No, not really. I am going to try and do good next year, then hopefully I can stay for one more year and we’ll see how it is going to play out. I know many young kids are coming up and Seewer will maybe come to our team, so maybe I will try to help him a little bit? We will see.

Having the knowledge that next year may be your last, do you think that will put more pressure on you through the season?

I don’t think so, you know. Maybe less [pressure], because we are expecting a baby at the end of November. I think that, when you have a baby, if you have a bad weekend and see him, then you know that there is more than racing. Maybe that will help me to just relax?