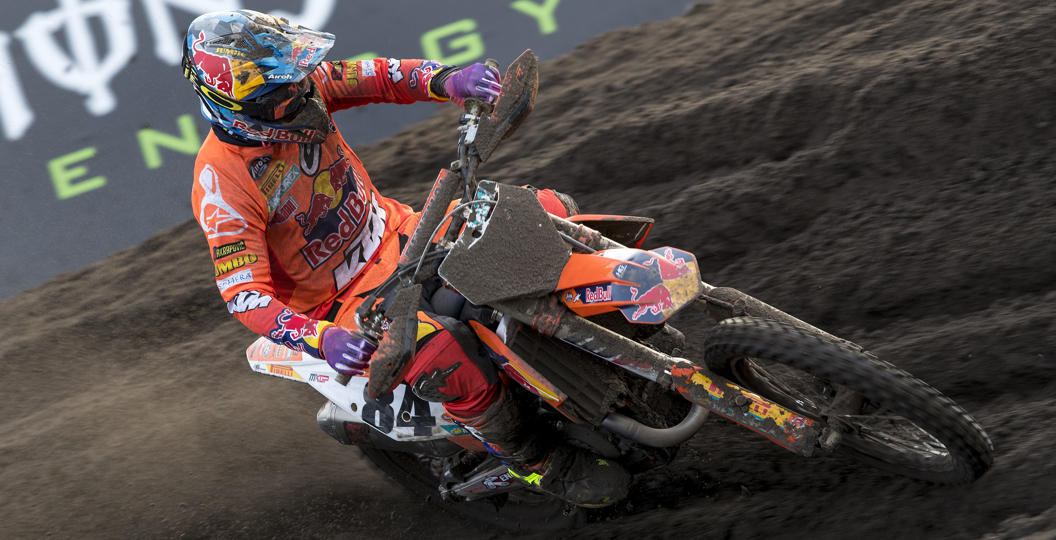 Jeffrey Herlings dominated proceedings at round two of the FIM Motocross World Championship and further cemented his position at the head of the table. Herlings had his work cut out for him though, much like he did at the first Grand Prix two weeks ago, but pulled through in an impressive fashion and reflected on that in this exclusive interview. The audio version is available elsewhere on MX Vice.

MX Vice: I feel like we just need to repeat the same questions as in Argentina, because it was basically the same race, but what a way to win your home GP. Did you always believe you had it in the bag, even when you were twelve seconds down?

Jeffrey Herlings: No. When I was twelve seconds down I was like, same thing as Argentina, once again. I had to go fight through the pack. It was tough because Tony [Cairoli] was leading and I was, like you said, twelve seconds down. There was a lot of good guys in front of me. The track was really dodgy and because of the rain it was kind of one-lined, so it was pretty tough to overtake. I’m going to say I was happy how it all turned out. To chase the nine-time world champion and come out with this result is pretty amazing.

The track yesterday with the snow and the rain, all of that, people said it was the deepest that Valkenswaard has ever been. I’m guessing you preferred it then? Today was a little harder underneath. I honestly thought it’d be tough to come through, but obviously you did it.

I don’t know if you noticed this. In sector two in the second moto, which I am guessing is the Monster jump all the way over the far side, you were consistently a second or second and a half quicker than anyone else. Do you know what you were doing there? Did you see something that Tony was doing wrong where you were just picking up time? That was honestly where you got it done.

Actually, I was just kind of supercross-style going through it and using it as whoops basically. Just jump all the way through. When I was behind Tony he was trying to go inside, inside, inside on the flat. So I think my line was better, to just go a little bit more with the flow and keep jumping, jumping, jumping.

Then, on the other hand, in sector three, which was the bit after that obviously, you were losing two tenths, three tenths or one tenth. Any idea why that was?

At least I gained one second in the section before, so to lose two tenths I can live with that! Actually I don’t know. At one point I was following Tony’s lines. Maybe he had some better ones, but sometimes he blew the berm or whatsoever, and then you already lose a bit of time. It was also depending the track, as it changed so much during the moto. Every lap the track really changed. I don’t know actually where I lost, but at least in total I gained time.

I know you have always mentioned that one of your problems in MX2 was that you were too confident. You just knew you could win no matter what. These races have obviously been amazing and everyone is talking about how you can now win no matter what. Are you starting to kind of keep yourself in check and make sure that you don’t get overconfident again?

This is amazing, but one thing you need to work on is the starts. If he is going to get a holeshot every time, then you need to get up there sooner. Do you know anything that you can do to improve that?

Obviously now it was a bit unlucky with the gate pick from yesterday. I went like twentieth gate pick or something. So, to go so far out and then with a lot of all the heavy hitters on the inside of me on the gate, they kind of pushed me wide because the first turn was to the left and I was coming from the outside on the right. They pushed me wide. I think I took maximum out of the starts. I think the starts were really good today. Also yesterday when I was on the inside I got second out of the gate, so I think the starts have been improving and that was just very unlucky from the position where I was at.

From everything you have said, it sounds like there are no worries at the moment. Is there anything at all that you want to improve with yourself, the bike or anything? Are you just happy?

No, actually I’m very happy. If you asked me today who is a better starter, for sure Tony. Can we improve that? Yeah, but he is very talented at racing but also at the starts. I think that the starts are also kind of a gift. He’s very talented at that and very good at it whatever bike he is on, whether a 350 or a 450. He is just a better starter than I am and I need to accept that. I need to work on that at least, so I can be in the top three every time and then when I start I can really be on the back of him, let’s say, and can start the battle immediately instead of passing like five, six or seven other guys before I get to him.