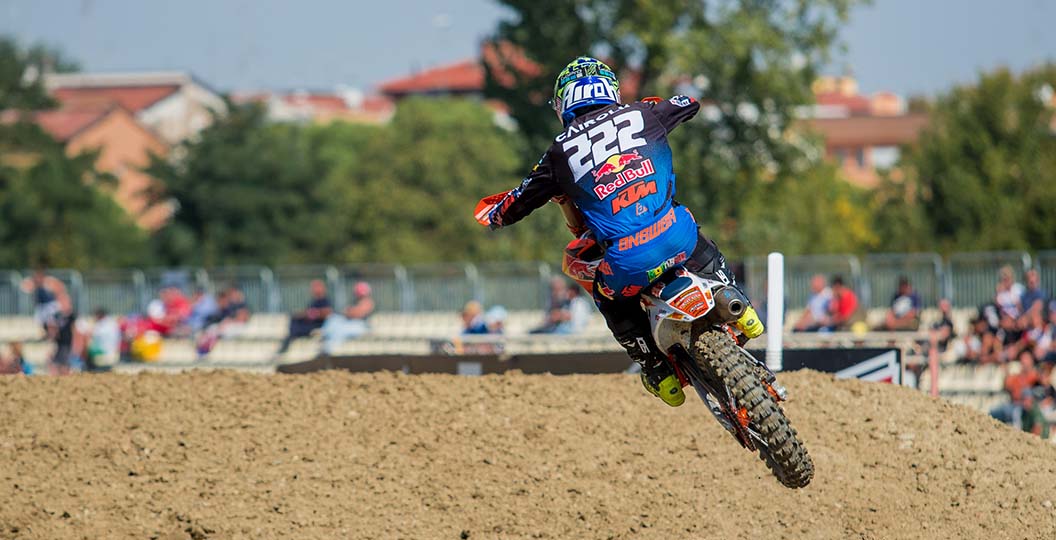 Antonio Cairoli was dealt a crushing blow at the final round of the FIM Motocross World Championship, the Grand Prix of Italy, as he crashed out in qualifying and was unable to race the two motos. Although he was left battered and bruised, he still made some time to do this exclusive MX Vice interview and explain his situation.

MX Vice: You have not got much time, so let’s just sum up the weekend. It was not good. Not what you wanted at all, but if there is a bright spot it is that you are in one piece. With that crash, you easily could not have been.

Antonio Cairoli: Yeah. It is a quite tough end of the season for me. A lot of crashes lately. Yesterday it was not totally my fault. The track here is nice, the location and everything, but to be honest some places are very, very dangerous. I had the sun in my face on that spot and then I just made a small mistake. I lost the balance. If it was normal track, I could just put my feet down and lose two positions then start again. There was a hole there and I fell inside in the asphalt, so I had a big hit.

At the beginning I was very scared, because I had a lot of pain in my back, so I did not really know what was happening and I was on the ground for quite long. I then stood up and we did all the checks. Actually, nothing broken, but I stretched two muscles with a big haematoma on my gluteus and in my back. Today we decided with the doctor to skip, because I want to be as much as fit as possible for America. Already it is not good what happened, for sure for my motivation and also for my feeling. It is like this. Hopefully we can regroup as soon as possible and try to do a good race in RedBud.

On Instagram you said that this track is amazing, but a little dangerous in spots. What is one change you would make before coming here again next year?

I think the place is amazing here. The facilities, the medical centre. Everything is top class, but some places it needs to be checked. There is too less dirt on the track. When you go off the track, there is immediately asphalt and it is not really the best thing to fall on. I think they can still improve, because they have a lot of potential. This is what I hope for next year. Hopefully it is going to be a nicer track.

Finally, obviously it is tough to say now, but you are not going to be one hundred percent at RedBud. Where do you think you will be? Eighty percent? Can you put a mark on it?

I do not know exactly yet. I see how it goes now with this haematoma, because I can barely sit. It is not really easy to have this kind of thing. It is always a problem. You need to stay with the front guys. You need to be one hundred and ten percent. It is not really the case at the moment. Hopefully it is going to be a good comeback.

For sure this week is going to be tough, but I will do all I can to heal as much as possible and then decide the strategy we will do on the team. For sure it is a team event. It is not a single race. We will try our best with the team, but of course I will do my best also to have individually a good race.