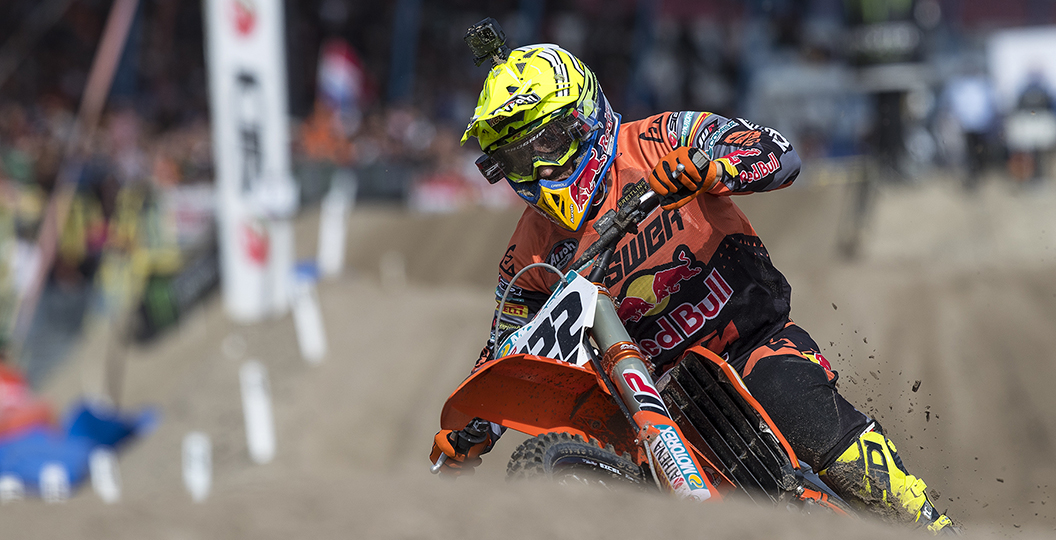 Antonio Cairoli is now a former world champion again, but that is not a concern of his at this time. Cairoli has his sights set firmly on next year, despite the fact that it is many months away, and references that again in this MX Vice interview from the Grand Prix of The Netherlands. Other hot topics are also tackled, like his bursts of speed on the sandy track and the upcoming Motocross of Nations.

MX Vice: Obviously when people look at today they are going to look at the fact that you lost the championship but pushing that to one side I thought it was actually good. You are beat up still and gave Jeffrey [Herlings] a pretty good run in all of the sessions, even practice. Your times were not as far off as maybe some people expected them to be.

Antonio Cairoli: Actually, I really enjoyed the ride today. I am really a bit pissed off at the second moto, because I was keeping a good gap after he crashed. He came close to me, but then I was two and a half seconds or three seconds and always there. Then with a lapper I messed up again. First moto he was a little bit quicker than me with passing the lappers and I am still struggling a little bit. Maybe because he was racing a lot of Dutch races and he is used to this kind of traffic in the sand and I’m not racing at all during the year? I am happy overall, because the speed was there. The fitness was also coming better and better.

That second moto I could keep the rhythm for all of the moto. Now we have an Italian GP. It is a lot of pressure again and a lot of fans are coming. Really enjoying the next races and then ‘Nations. For sure it is a big event. It is not one of my favourites, because it is a team event and motocross is a sport for single. That is what I think. You never know what can happen in just one race. Like Jeffrey said in the conference, you can have twenty races in a championship very good and then you mess up one race and then you are sh*t. ‘Nations for me is just a very difficult race, but I am honoured to ride for Italy and try to do my best.

This is a bit random, but what you said there made me think of it. Do you think that maybe it would help you to do a national championship between MXGP rounds, like Jeffrey? Do you think that is something that helps those guys keep the intensity up? Obviously, the Dutch is different because there are a lot of MXGP guys there. The British Championship or the Italian Championship maybe would not be as good?

Yeah, for sure it helps a lot. You can see it when he is lapping people. He is very quickly through the pack and also with passing. If he has a bad start, he is quickly a lot of time to the front. I am not racing since, I do not remember, seven or eight years. I only raced two races in the beginning of the season from the Italian championship and that is it. I do not race any races. For sure it helps. Maybe next year I try to do a little bit more races, but it is not easy. After so many years of races, but still nothing to regret. He deserves this title. I know where I need to work. Hopefully next year we are going to be more prepared.

How is your hand, knee an everything that is banged up and a little bit injured doing at this point?

The hand is bothering me a little bit less now. I can ride during the week more, but the knee… I do not know if I need surgery or not. I need to see again my doctor, because it is a big stretch on the ligaments, so the knee is moving a lot. So hopefully not. If I just can make some more muscle around the knee, then it can keep it more compact. For sure I am really looking forward for next season already. Again, congratulations to KTM. They did one or two and it is not always easy.

You mentioned it a few times in our interviews, but we have not really expanded on it. You are going to come into next season ready and improve on some things. What are those exactly?

The endurance for sure first, because especially the first part of the season I was leading a lot of races until the last five minutes and then he got by me in the last five minutes. This is difficult to improve, because it is one part that you need to work a lot, a lot, a lot. This is the only way to try to beat him, because I have to say his intensity is incredible. He can keep the same lap time for all of the forty-minute moto and in both motos. This is his strongest point for sure, I think.

Going into the ‘Nations, obviously all eyes are on Herlings and [Eli] Tomac. Is that exciting in a way for you? You are going in as a bit of an underdog and obviously you are a nine-time world champion, so you should be in that conversation. You could quite easily go in there, beat them both, and suddenly all off-season everyone would be talking about how great you are.

I do not really care, because this sh*t talking has always been there since forever. I am really not bothered about this stuff. I do not regret what I did in the past and I do not regret what I am going to do in the future. These people who are talking in the media, they like the fights and stuff. I hopefully can enjoy the battle. I will love it, together with them, Herlings and Tomac, but we do not forget [Ken] Roczen I think is also one that can make it in the fight. It will be amazing to have three Europeans against the Americans. It will be amazing to have such a great fight.

Finally, going into Imola, I guess winning a GP would be a nice way to cap off a difficult year?

Not really. I do not really have pressure on. This season has gone with a lot of emotions. I do not really plan stuff. I just ride and if we can win, we win. Otherwise we finish on the podium. It is a great year still. Like I said, I know where I need to improve. It is a lot of work to do, so I am far from where I want to be with my physical. This is what we are trying to figure out when we have to start and where.