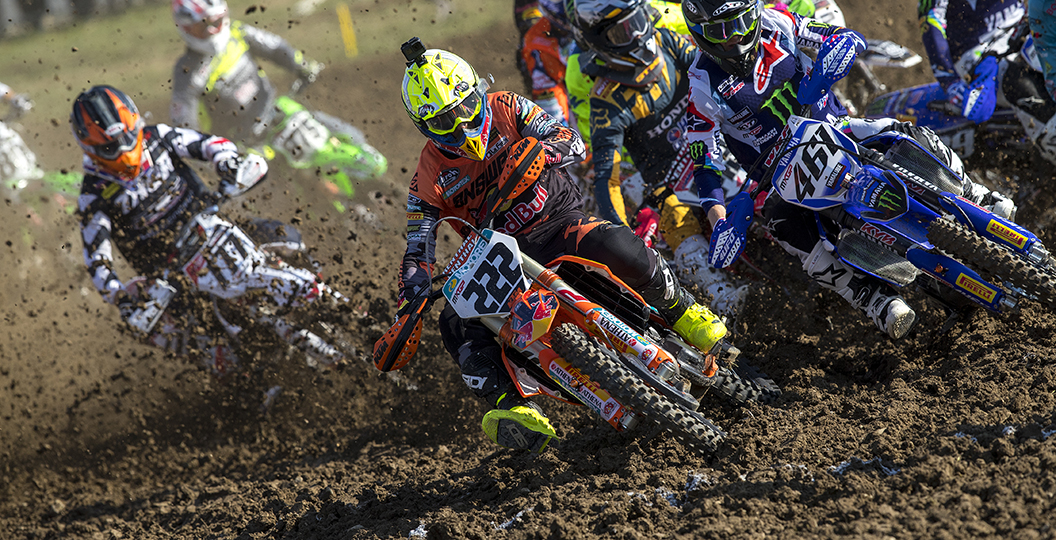 Antonio Cairoli suffered yet another setback at the Grand Prix of Switzerland, much to the dismay of those in his camp, as he fell in moto one and injured his knee. Cairoli stuck around on Sunday evening to discuss his frustration and motivation for the rest of the season and next year. It has since been revealed that his knee injury is not as bad as he presumed, so he will be racing in Bulgaria. There are still some great nuggets of information in here though.

MX Vice: Obviously, a rough Sunday. Saturday was good, and it looked like you were back on the up and charging just like you wanted, but you twisted your knee and I guess there’s not much you can do at this point.

Antonio Cairoli: Yeah, it is bad. My goal was to push and to give some wins, but yesterday I was feeling good. This morning also. First moto start was not the best, eight or nine, then I come quickly to third place. I see that Jeffrey [Herlings] was in front already and when he is in front he’s pulling away quickly, so I need to pass as quick as possible. That is what I was doing. I tried to attack [Clement] Desalle, but I arrived a little bit too fast on that single jump. I stalled the bike on the ruts and I went over the bars. Immediately I felt that something was not one hundred percent with my right knee.

I was a little bit frustrated already in that moment. I already had the injury to the knee and I felt that it is quite similar to the last time. I was really, really sad. My handlebars were bent and the front brake was broken, so I barely could finish in eighth, which was okay, but for sure we are not looking for this. It was quite a difficult Sunday. Second moto again, better start, but on the right corners I really struggled a lot. I did not want to put my knee down. I did not really have the good momentum, then everybody was passing. I was stuck in fifth place, which was good. All the group was there, more or less, until twenty minutes, so everything can happen still. I was riding not my pace though. I was riding with risks and stuff, so I went a little bit tighter.

My knee was bothering me a lot also, so mentally I did not know what to think. It was a little bit a difficult race, but I could finish sixth. I know it is not what we want to fight for the title, but now the priority is to check the knee and I hope I can finish the season because it is quite bad that second moto feeling with riding. Hopefully it does not swell too much, so I can check tomorrow with my doctor in Italy to see if we can continue. For sure that is my goal. I would do everything to keep the title still alive if I can.

Are you surprised just how well you did in that second moto? It sounds like you were in a lot of pain, so to pull off a sixth, that just shows what a great champion you are.

Yeah. I was surprised actually, because my knee is moving a lot and landing on the jumps. I feel the stability in the ruts when I have to put my knee down I see the stars when it twists my knee a little bit. It is bad. I like to ride when there is something. I feel a little bit more motivated to see that I can handle some pain, but it is not really what we want for the title for sure. On one side I was a little bit sad. I did my best, but this is motocross and you cannot really predict stuff.

I guess you are worried about ligament damage when you twist your knee? That is kind of the greatest concern?

Yes. I think for sure ligament damage. I hope for sure it is not the ACL. I hope it is the back ligament. From the first people that saw me today, they think this because I could not ride if the ACL is broken. I had already in the past on the other knee and I really could not ride. So, now, hopefully it is not too bad and it is the back ligament or the lateral ligament. We try to see what it is, so I hope I can get some rest this week and I can be in Bulgaria.

Say it is still just as bad in Bulgaria and you have to ride around and get fifth or sixth, are you interested in that? If something happens to Jeffrey, you would still be right there, but then you do not want to be stood here next weekend talking to me about another sixth place.

No, not at all. It is very bad. For me, it is difficult to ride like that, because I know I can be better. When you have this kind of problem, it is frustrating. Like I said, it is motocross and you cannot always be one hundred percent. You need to suffer. You need to fight for points.

If you were riding over your head and you were cartwheeling down the track every weekend, then it would not be surprising that you are getting injured. These are just freak incidents and it just so happens that every single time, something on your body seems to end up hurt. There is not much you can put this down to other than it is just one of those years, similar to 2015 and 2016.

Yeah. When it turns like this, you cannot really stop stuff. When it is your year, it is your year. You risk everything to you go fast, you make passes and you do not crash. When it starts to be like this… I had this feeling in the past. It is not your year. But I am healthy at the moment, so hopefully it is not too bad with the knee and I can ride next week.

This must be what motivates you for next year. Everyone thinks, “He is getting second. He does not want that.” You are getting second not at one hundred percent though. When you can come back next year fully healthy, you must believe that you can fight for the championship again? That is the exciting thing for you.

Yeah, for sure. I am fully motivated for another season. That is why I signed two more years. When you are riding, you always want to be in front, but when you are not one hundred percent you cannot fight with Jeffrey, because he is riding so good at the moment and he is training hard. He is on a good wave. You need to be one hundred percent each weekend and you need to be always on the limit. That is what he is always, always on the limit, but still he is not crashing. He is not making big mistakes. He is good at the moment. Good for him. We try to regroup and try to be better.