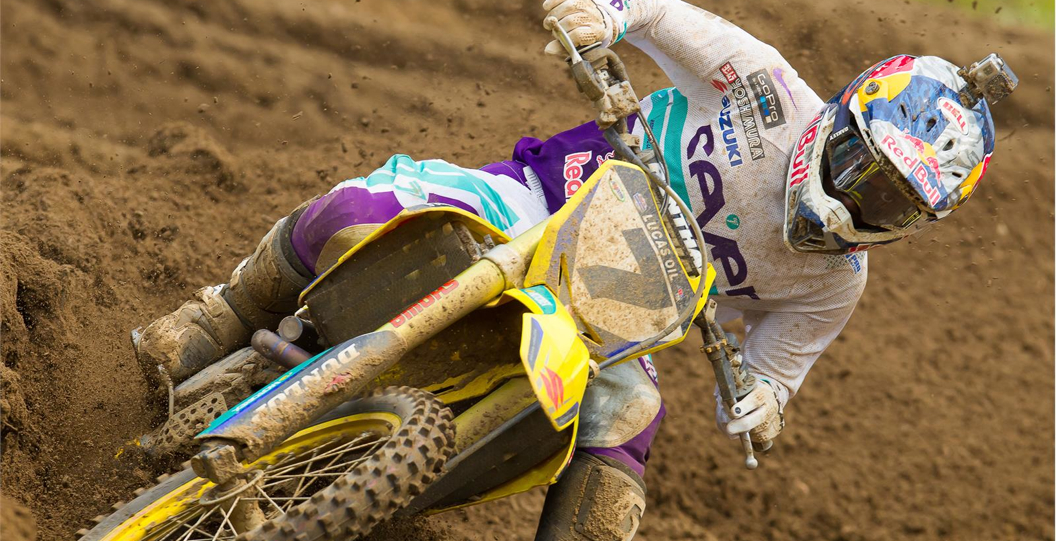 Question: Amazingly, James Stewart is just a couple of points ahead of Brett Metcalfe and Josh Grant. Eli Tomac is coming up too! Will James hang on to fourth in the standings? What is the best finish that he will have at the last four rounds?

James Dunford: James Stewart – what a legend. Anyways, before I get carried away, of course he will. If one person could come back from all this controversy, it’s the #7. We can count Unadilla out, but the other rounds? Who knows. His speed has actually been pretty good, we’ve just witnessed lots of weirdness. What he needs is a solid 3-3 for third overall to build on, and who knows what he could do after that. I’m going to predict another moto win before the year is out. What’s that based on, you ask? I’m a believer – that’s why.

Lewis Phillips: Well, this is a disaster. Prior to the drug test scandal, this looked like it was going to be a great year for James, but this train is now off the rails. So, will he hold onto fourth in the standings? No, I don’t think he will. I think that he will miss at least one round over the next couple of weeks, which would then put him in an impossible position to finish fourth. I just can’t see how he is going to turn this thing around – I feel for Stewart, I really do. It will be interesting to see how this plays out at the final four rounds.

Question: Right, there are eight motos left. Who will win the most 450MX motos? Ken Roczen, Ryan Dungey, Eli Tomac, Trey Canard or someone else?

James Dunford: I’m impressed with Tomac. He’s come out and shown pace that the two orange boys couldn’t quite match at Millville, and I’m still a little shocked. Form is going to be crucial, and considering he’s out of the championship, I’m going to say he’ll take the most wins. Roczen appeared to struggle a little in the second moto (again), and Dungey doesn’t quite have the outright speed at the moment. Eli has nothing to lose, too. I’d love to see Trey grab a win before the year is out.

Lewis Phillips: After putting a lot of thought into this, I think Eli will claim four more moto wins, Roczen will take another two and so will Dungey. Tomac could end up winning no more races though, if his starts are mediocre, which is a common problem for him. However, he has proven that he has the speed to match the title contenders, so he will be tough to beat if he has a good start. Although Roczen has been a little off in recent weeks, I think that he still has a couple more moto wins in him; although his second moto performances may stop him from taking another overall win.

Question: Is the 250MX title fight over? Is there any way that either Cooper Webb or Blake Baggett overcome this deficit?

James Dunford: Hmmm, it will be a challenge. A championship is never, ever over until it’s mathematically impossible – oh, and everyone has passed the relevant WADA/USADA tests. Blake is about the only person that I feel could come back from this, and even for him it’s a tough one. His starts are a real issue, and that’s not something the Yamaha’s seem to struggle with – so I’m going to say stamp it, JMart for the win.

Lewis Phillips: It is never over, just look at Jeffrey Herlings’ situation. However, I do not expect anyone to catch and pass Jeremy Martin in the standings, as the series leader has been a model of consistency for the most part. It’s not like he gets bad starts or has too many close calls, and neither Webb or Baggett have proven to be too much stronger than him. So, yeah, this is a pretty much a done deal.