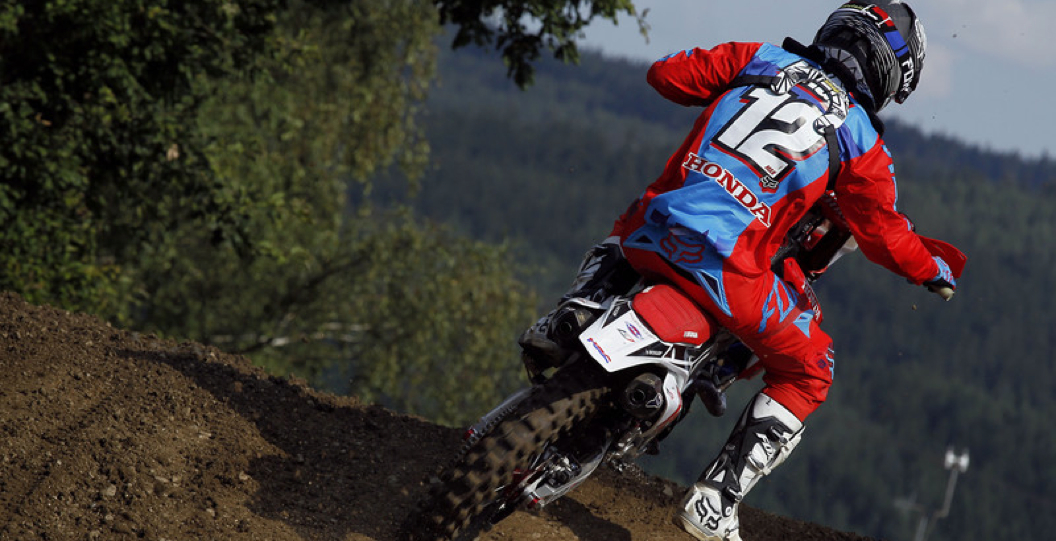 With the off-season rapidly approaching, more deals are being discussed for next year. There have not been too many announcements yet, which is quite bizarre – this is usually the time of year that multiple teams hold press conferences each week. With very few facts available, we felt that we needed to make note of a few of the rumours that are floating around the MXGP paddock currently.

Unsurprisingly, Antonio Cairoli and Jeffrey Herlings are still locked in for next year, and the same goes for Ken de Dycker. Jordi Tixier has already confirmed that he will not be on the team in 2014, and the team has filled the spot with a talented Latvian, Paul Jonass. Interestingly, it seems they could run a three-man team in each class, as there are strong rumours floating around that Tommy Searle may join the MXGP side of the squad. Whether this will end up happening remains to be seen – it could all change yet! Steven Frossard and Evgeny Bobryshev were rumoured to be heading to the KTM MXGP setup, although it seems that will not be happening now.

It was announced at Loket that Davy Pootjes has signed a five year deal with the squad; he will be in the EMX250 class next year, and could potentially step up for an MX2 round later in the year, depending on how it is all going.

Well, this is certainly a complicated one. Gautier Paulin will not be back with the KRT squad, according to most, which paves the way for Ryan Villopoto to travel over. Although unconfirmed, there have been strong rumours about this for quite some time now, and no one has come out and denied them. It is my opinion that talks are currently going on behind the scenes; it certainly seems unlikely that he will be racing in the USA, as he has sold his Floridian property, which he has based his training program out of for quite some time.

Rumours suggest that Ryan Villopoto has demanded that Tyla Rattray has to be his teammate on the Monster Energy Kawasaki Racing team, if he does come over. Intriguingly, there has not been much talk about Tyla, other than this rumour, so perhaps this is quite concrete? KRT have expressed some interest in other riders, and Steven Frossard could return if this Villopoto deal does not come off. Steven came close to riding for another manufacturer, but the deal fell apart at the last minute, so he is shopping around.

CLS Kawasaki will be focusing solely on MX2, and will have Thomas Covington, Dylan Ferrandis and Jordi Tixier beneath their tenth. There has been very little talk on where Alessandro Lupino could end up; although he is one of the riders that will sign a deal once the big hitters have decided where they are going.


Yamaha have obviously scaled back their factory team this year, but it seems they will be running two MXGP riders again next year, as rumours have emerged that Shaun Simpson and Evgeny Bobryshev are two of the riders vying for a spot alongside Jeremy van Horebeek. Whether this will materialise or not remains to be seen. It seems David Philippaerts’ DP19 Racing setup is going to return with more support; initial reports suggested that Christophe Charlier was going to pit alongside David on a 450F, but it now seems the Frenchman is entertaining enduro offers. Strangely, there has been little talk of there being an MX2 rider beneath the factory Yamaha tent, but perhaps they will leave that solely to the 250F teams that they support.

Rockstar Energy Suzuki are pretty much set, folks, as both Clement Desalle and Kevin Strijbos will return, it seems. Glenn Coldenhoff will also represent the brand on a 450F, although he will pit out of the Rockstar Energy Suzuki Europe awning, like he did this year. It has already been confirmed that Jeremy Seewer will be his MX2 teammate on that team. Aside from those teams, Suzuki does not have much of a presence in the paddock, which is a shame.

Although unconfirmed, it seems that it is a foregone conclusion that Gautier Paulin will be heading to the HRC awning as their number one rider. It will be the first time in quite a while that the team has had a proven title contender beneath their awning, which must be an exciting prospect for the brand that is desperate to return to the top step. There were a few riders linked to the second spot on the squad, although it now seems that Evgeny Bobryshev may return, as some other riders that they were going after are strongly linked to other spots.

Tim Gajser will head their MX2 effort again, from the confines of the Gariboldi awning. It seems he could have a capable teammate too, as rumours suggest that the team has shown interest in some of the top EMX250 riders, although whether anything will come of that remains to be seen.

The vacant spots on the Red Bull Ice One Husqvarna team have been quite sought after, unsurprisingly. It now seems that Max Nagl will fill the role of their lead rider, which would be a good fit, as the bike will not be too dissimilar to what he rode when he was last a KTM rider. Although there has not been any firm talk regarding who is going to partner him, there is a high chance that Todd Waters will return, and Dean Ferris could potentially fill a third spot. There may also be a private team running Husqvarna’s in the premier MXGP class next year, which would be a good spot for some other riders to fill.

Strangely, there have been very few rumours surrounding the official Husqvarna MX2 effort. Aleksandr Tonkov could potentially return, but whom they will sign to fill the spot vacated by Febvre remains to be seen.