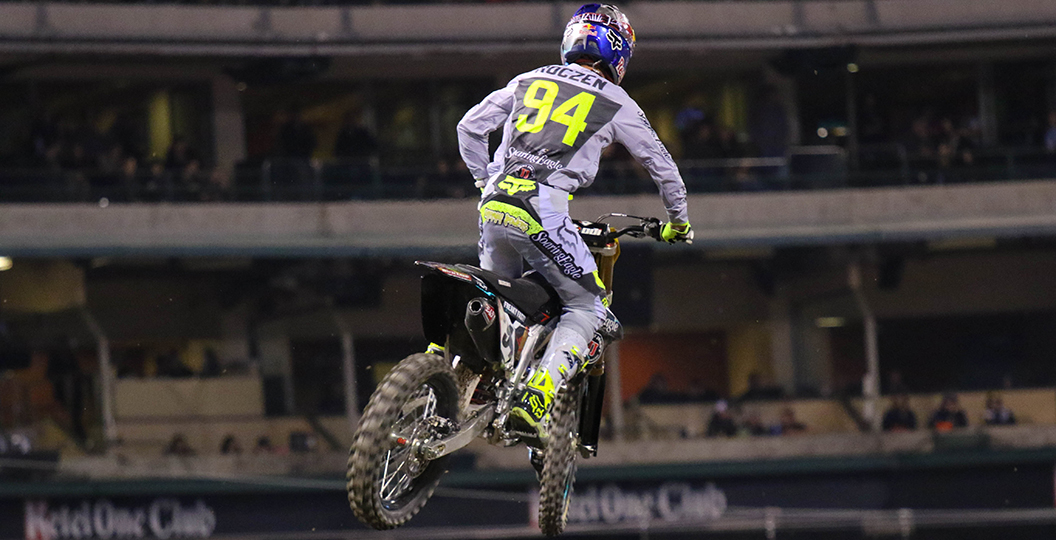 Vice Blog: One Down

It has been a while since I last did one of these, simply because there is so much to do in California! You’ll run into a ‘name’ of some sort, no matter where you go, so there is a lot of great content coming your way on MX Vice.

It is fair to say that it is a good time to be in California, as everyone with an ounce of interest in the sport has their sights set firmly on the mecca of motocross. Where do we even begin? Anaheim 1 has been and gone, although the drama that unfolded is still looming. It was one of the most action-packed nights of racing you’ll ever see, with fights, red flags, injuries, battles and surprises.

You can see why sponsors, riders and teams are mainly focussed on the Monster Energy Supercross series, as it is a show that attracts casual fans as well as the hardcore ones. The reactions during opening ceremonies are a testament to that, as Chad Reed, James Stewart and Ken Roczen emerged to the largest cheers. On the other hand, someone like Cole Seely came out to deafening silence. Why? He simply doesn’t have that star quality yet, to the average fan, but it will come.

The great thing about the Monster Energy Supercross opener is we were left with more questions than answers, so the second round this weekend is almost just as intriguing as the first. Will Jason Anderson win again? How good will Ken Roczen be when he avoids trouble? Can Justin Barcia rebound? Is Eli Tomac ready to win races? Is James Stewart’s run at the title over before it has even begun? What will happen when Trey Canard harnesses his speed? Is Cole Seely a contender? Could Cooper Webb end up going undefeated? See, there are so many talking points! We’ll continue to cover the Monster Energy Supercross series over the coming weeks with exclusive news, galleries, videos, interview, opinions and more! Stay tuned.

My job is made easier by the fact that, as mentioned previously, the riders are pretty accessible mid-week. Since A1 we have conincidentally ended up at the same practice tracks as Roczen, Tickle, Brayton, Short (who is back on a bike), Weimer, Decotis, Stewart, Bell, Mellross and Friese (who declined to comment on this past weekend’s events, but promised to speak out on Saturday). MXGP riders like Searle, Pocock, Paulin, Bobryshev, Desalle, Brylyakov and Prado have also been spotted. That’s all in the space of three days!

The latter, Prado, was putting in a final session on a supercross track before returning to Europe on Sunday. I was actually extremely impressed by the Spaniard, as he looked pretty good on a supercross track despite having limited time. After taking some times, he was around a second and a half a lap slower than veteran Kyle Cunningham and just under four seconds slower than Jake Weimer. With a little more practice and experience, he could end up being a contender as soon as he rolls out onto the track at Angel Stadium for the first time. When will that be? You’ll have to subscribe to our YouTube channel to find out!

It’s interesting to see the kind of work each guy is putting in midweek. Jake Weimer, for instance, has been putting a lot of time in in the whoops over the last two weeks. Working with Donnie Hansen now, Jake had a solid start to his season with a twelfth. Roczen has been spotted at numerous tracks this week too, with the entire RCH Racing Suzuki team in tow. What I find most interesting is that Ricky Carmichael was there the whole time – I don’t think many people think he’s that involved.

It is hard to cram everything that I have observed and experienced into this one column, so we’ll try to make this a little more frequent in the future. In the meantime, stay tuned to our Facebook, Twitter, Instagram and SnapChat accounts for the inside line on San Diego 1!