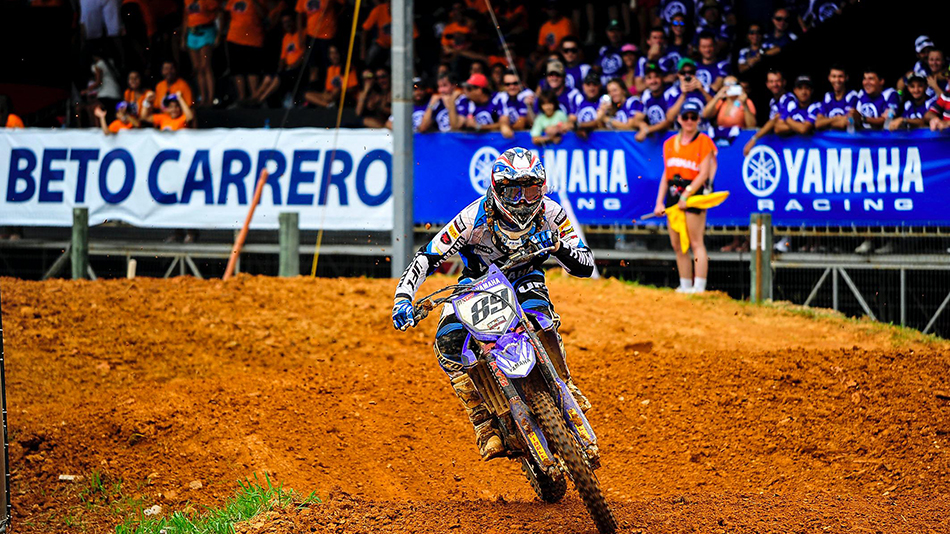 Van Horebeek back on the box in Brazil!

Lewis PhillipsMarch 31, 20140
Yamaha Factory Racing’s Jeremy Van Horebeek sprayed champagne over his YZ450FM for the second Grand Prix in succession at Beto Carrero for the Brazilian stop on the calendar and the third round of eighteen in the FIM Motocross World Championship. The Belgian walked the MXGP podium with third position after taking his maiden trophy in Thailand three weeks ago.
MXGP visited Brazil and the theme park location north of Florianopolis for the third year in a row and Beto Carrero provided its usual compact, jumpy and hard-pack layout but some watering from both the skies and the irrigation system creating a wealth of bumps and some very rutty corners. The technical level was thus elevated for lap-times that carried over two minutes a circulation. The combination of the demands of the track and the stuffy temperatures (almost 30 degrees) and humidity meant another physically tough Grand Prix for the stars of the FIM show.
Van Horebeek was in confident form on Saturday. The third fastest lap in free practice led to the top spot in Timed practice but the Belgian was left shaking his head after the qualification heat in which a mediocre start meant that he had to push through to fourth place. His standing was still good enough for a prime slot in the start gate and JVH was again lively off the line when it counted. On the damp, tacky and rutty stage Van Horebeek shone. He led the opening half of the first moto until surrendering to the pace of world champion Tony Cairoli. Second position represented his third top three finish in a row and set him up for his second grab of silverware which he confirmed in the second moto with fourth position for a 2-4 scorecard. Jeremy has yet to drop out of the top five in all six motos so far this year.

JVH is joint second in the MXGP World Championship standings.

Bike it Yamaha Cosworth’s Rui Gonçalves ended the Grand Prix with sixth overall. The Portuguese showed his typical skill out of the gate to put himself into contention for top ten positions in just his third FIM appearance in ‘blue’. The better moto was the second and final one of the day. Rui reached the chequered flag with seventh place; an improvement on three positions from the tenth he managed earlier in the afternoon.

Also on the YZ450F was DP19 Racing Yamaha’s David Philippaerts. The Italian was at a slight disadvantage after a first corner crash on Saturday left the Italian trying to get back into the qualification heat but the former world champion retired shortly after with a broken rear brake. In the GP motos he blasted away from his lowly start slot. Ninth in the first moto was his highest classification of the year to-date and enough to help forget some of the problems he experienced at round two in Thailand. A fourteenth in the second moto meant eleventh overall and with the promise of more to come from the veteran and still Yamaha’s last world champ. After the first three events and overseas travel on two continents, the FIM Motocross World Championship heads back for the European leg of the schedule. The Grand Prix of Trentino in Italy will bring the paddock together again in two weeks time.

Jeremy Van Horebeek: “My weekend went really well and I felt very good on this track. We worked hard with the team again and the bike was great. I managed to pull a good start in the first moto and it made things pretty easy. I was leading a few laps and then Tony was behind me. I let him past because I still get a bit nervous out front; I’m still not used to leading but I will be! When that happens I’m sure I can keep it. In the second moto I had to cut through from a bad start. I think I was eleventh or something and worked my way back to fourth. I reached Clement’s rear wheel but then he ‘pulled the trigger’ and he is a tough guy. Anyway, we are on the podium again. I wanted to be in the top five as much as possible this year but it seems I need to think a little bit further now. I want to keep my feet on the ground and keep working hard. I hope to win a GP this year.”

Rui Gonçalves: “I’m happy. Today I had pretty good starts and solid laps and was riding a bit more in the top ten. In the first moto I needed to throw my goggles away with two laps to go so I lost the contact with ninth and eighth positions. I just had to settle for tenth. In the second moto the start was OK and I got up to seventh in the final laps. I’m definitely happy. Things have been improving since Qatar and that is what we are looking for. We started late for 2014 but we are catching up quickly, which is promising. I cannot thank the team enough. They have been doing a great job supporting me 100%.”

David Philippaerts: “I feel tired! I’m happy with the first moto and was riding well. I lost time at the beginning because it took me a while to settle into the race. I haven’t raced much actually because we had the fuel problems in Thailand so hardly did anything there. I also had the crash yesterday in the heat race and had to stop! So we’ve had less motos than the other riders. In the second moto I was losing a bit of time in the corners and was running a speed around the top ten. I was feeling a bit tired and my hands where also cutting up with blisters. It was hard to stay on the bike and be fast. I finished the race and this was important. The bike was working so good and I’m really happy about this. We had done a lot of work and riding in the past two weeks, around seven hours, and I think I might have a bit of fatigue from this. Now we have to focus on our goals and I know it is for-sure possible to be in the top ten every race.”