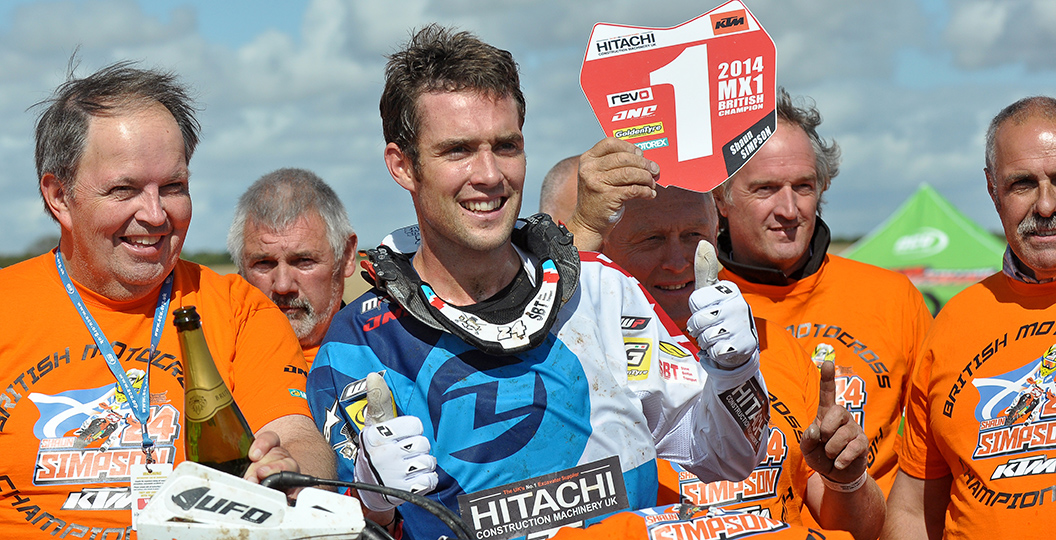 Unsurprisingly, Shaun Simpson clinched the MX1 Maxxis British Championship title at Cusses Gorse. After his main rival, Jake Nicholls, succumbed to injury, it has been smooth sailing for the Hitachi Construction Machinery KTM UK rider. With an astounding one hundred and eighteen-point lead to his name, he collected the number one plate following the second moto on Sunday.

The fact that the Scotsman has only finished outside of the top two in one moto thus far this year is simply incredible, and overlooked by most. For that reason, no one can argue that he is not deserving of the championship, which is the second British title he has won – the first coming in 2008 with the same team. We caught up with Simpson at the end of the day to discuss his title, his performance and also next year.

Shaun Simpson: It feels good! The goal all year has been the championship, and we got the red plate back at Landrake and we never let go of it. I managed to get a comfortable gap after Whitby, when Jake injured himself after a collision with Brad. Since then I have managed to steadily progress. I won all three races at FatCat, which is the only round that I have won every moto. But, overall it has been a consistent season.

Our tracks have been my down point, but I still managed to win races and a lot of the overalls. The only overall I didn’t win was at Whitby when Tommy was there. Consistency is the key to any championship, and I think we have done a good job.

MX Vice: You could have had a shot at all three wins today, but it seemed starts were so crucial, because everyone was the same speed. What did you think of the track?

Shaun Simpson: Yeah, I do think you are right there. Had I gotten the start in the first one, I might have been able to give it a bit more of a go. It was pretty smooth, fast, flat out and there was a lot of grip in the first race. Kristian managed to get out there and really go for it. It was definitely a hard day at the office, but I’m on the top step again, so can’t complain.

MX Vice: Do you think you will be back defending your title next year, or will you be in Europe with a factory ride?

Shaun Simpson: The way things are looking at the moment; I think my best bet will be to stay with the team that I am with now. Nothing is signed or sealed, but I do think that would produce the best development for the bike and myself. I have had a great year, so why change? I would love to come back and defend my title. Like I have said before, it is a tough job to win rounds at this level, so it keeps you on your toes.