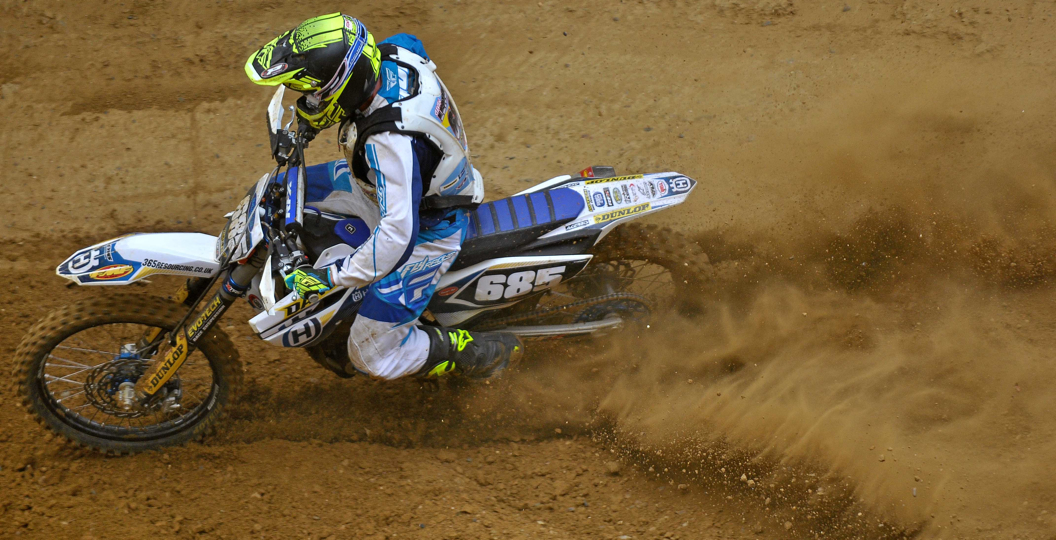 The MX Nationals series resumed this past weekend at the popular track of Canada Heights, following a summer break. Perfect conditions greeted the Dantec Husqvarna UK team, which set the stage for some fantastic racing.

The MX1 and MX2 riders raced together again, because of a lack of entries, but the two classes were scored separately. Although this makes it hard on the 250F guys, Steven Lenoir thrived, as he adapted to the conditions with ease in comparison to his rivals. The Frenchman qualified second in his class on Saturday, and Nathan Watson topped the times in MX1!

Although many MX2 riders struggled off of the start against the bigger bikes, Steven Lenoir rocketed out of the gate on his Husqvarna and started third, just ahead of Watson. The race was fairly uneventful for the pair; they swapped positions at the halfway stage and finished there. Although Lenoir started his weekend with a fourth in the race, it was actually a dominant MX2 win.

Both Nathan and Steven started the second moto towards the lower half of the top ten; however, their determination shone through over the twenty-five minute race. Within two laps Lenoir had already moved past a handful of riders and into fourth, whilst Nathan slowly picked off the guys ahead of him. The two teammates met on-track again on lap eight, as Watson got around Lenoir to steal fifth. He was not finished there though, as he stole fourth on the last lap to secure more valuable championship points. Steven was in the top five again, which also meant that he took another MX2 moto win and put himself in a good position to take the overall.

Although average starts hindered both riders again in the third and final moto, they pushed through the field with ease. Nathan was in the top three by the third lap, whilst Steven had acquired the MX2 lead after duking it out with his peers. Watson continued to push until the chequered flag fell, as he desperately tried to snatch the runner-up spot. However, he just ran out of time. Behind him, Steven Lenoir finished a fine fourth in the mixed race and took another MX2 win, to make it a clean sweep.

Nathan Watson ended the weekend third overall in the MX1 class, but he still leads the championship comfortably with three rounds remaining. Lenoir took to the top spot in the MX2 class and moved into third in the championship, despite the fact that he missed a round earlier in the year due to injury. Elsewhere, Tony Saunders wrapped up the ‘Youth Lites’ championship in the popular GT Cup series, which capped off a brilliant weekend for the team.

The next stop for the team will be Cusses Gorse next weekend, for round seven of the Maxxis British Championship round.

Nathan Watson: “The track was really good Saturday morning, I enjoyed it. Qualifying went well and I ended up first. As the weekend went on the track dried out and got sketchy; I didn’t like it, it was difficult to set the bike up as the track had so many different varieties of bumps! In the races I had bad starts and made it difficult, I ended up with a third, a fourth and another third. I’d have liked to battle for the win.”

Steven Lenoir: “It’s been a positive weekend. I didn’t get three good starts, but all the races were similar. I pushed hard for half of the race and then I was in control and riding safe – I’m happy I managed that, as the track was really gnarly. I feel good at the moment, I’m really happy with the bike setup. The team works hard, and it is definitely showing, so I’m going to focus on keeping this momentum going to next weekend. Thanks to all!