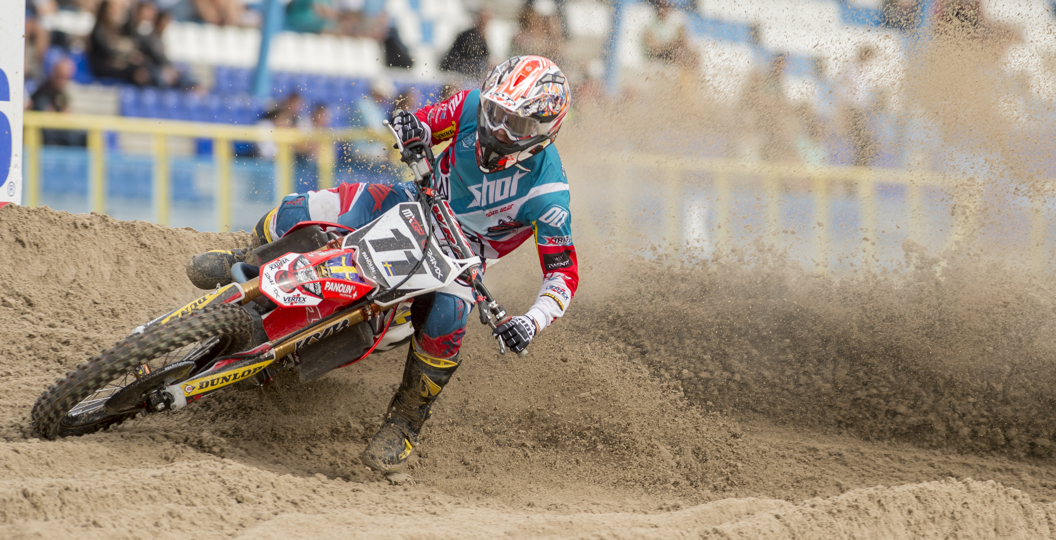 The Assen TT Circuit hailed its inaugural MXGP a great success. With  Christophe Charlier sitting out Sunday’s races due to a knee injury and Filip Bengtsson getting 14th overall the Dutch GP was less memorable for the 24MX Honda Racing team.

Even before Saturday’s qualifying race Charlier decided to pull out of the event. After having injured the meniscus of his left knee in Mantova the former European MX2 champ was in too much pain to compete in Holland. Team mate Bengtsson appreciated the temporarily constructed sand course. Posting the 9th time in time practice and qualifying 11th, Filip looked well placed to record solid points the next day.

Around 25.000 people attended the ‘Cathedral of speed’ on race day for a spectacular day of competition. The fast-starting Bengtsson lost a couple of places in the hectic opening lap but he remained consistent throught the 30 minutes plus two laps sprint to finish 11th.

A bad start in the second moto was followed by a morale-sapping struggle. Around 15 minutes into the race ‘Fillibang’ had climbed up to 12th. Unfortunately the Swede never ran anywhere near his potential. Eventually he secured 17th behind fellow Honda rider Jéremy Delincé.

Filip Bengtsson: “Saturday things went pretty good. The Assen track was very different from anything else but I liked it. Today the track was even rougher! In the first moto I had a great jump from the gate but I lost some positions  when I came together with some other riders in the first corner. For most of the race I was behind Waters although I got passed by Rattray myself with 4 laps to go. I tried to make a final push and closed the gap down but it was not enough. I don’t have a lot to say about race two because it was simply terrible! Already the start was bad. I did manage to move up but I had no energy whatsoever. And the riding was not good either.”