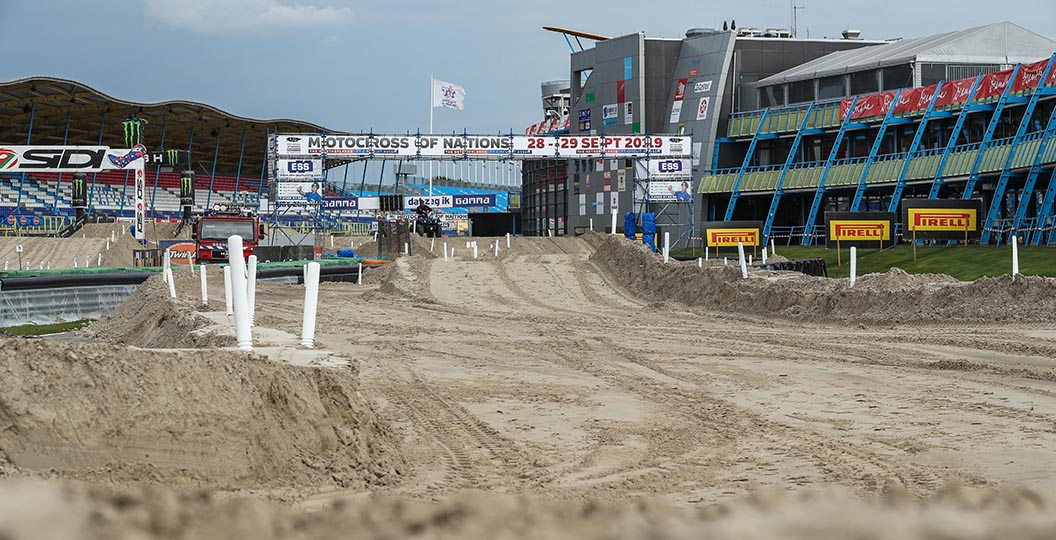 The Starter: MXGP at Assen

The track at the Assen TT Circuit is a purpose-built facility that is only created when the FIM Motocross World Championship rolls into town and, bearing that fact in mind, there is plenty of intrigue when entering the venue for the first time each year. There is potential for the layout to change and the prospect of that is exciting.

It has not happened at all in the last three years though, so most gave up hope. There have been significant changes to the layout this time though! One could argue that some sections are unrecognisable. The start straight is in the same spot that it has always been, but the first turn is a one-hundred-and-eighty-degree corner and does not send the riders straight into the hospitality building anymore. It does not take a genius to figure out that the crash that Glenn Coldenhoff had last season, where his bike went flying into some spectators, was the catalyst for these alterations. There is no way that anyone involved could run the risk of that happening again.

The rest of the circuit is fairly similar to recent years, except it seems as though a lot of the straights have been extended. Another noteworthy change is that the track goes behind the starting line and joins back on where the fortieth gate is, rather than running up the inside like in the past. There is a new tabletop behind the podium as well. The change that has been made to that portion of the circuit is actually quite similar to the additional section that was implemented at Frauenfeld-Gachnang last year. It is going to be most interesting to see how the riders feel about the little tweaks.

This is a great test for the Motocross of Nations as well, seeing as there will not be another opportunity to build the circuit before that historic race that will take place in a little over a year. There is actually one change that is quite intriguing. The finish straight does not stretch as far as it once did, as there is a roller at the end of that section rather than a tabletop. This obviously means that less of the grandstand seats are going to be used. Would it not make sense to extend that further than ever before when the MXoN takes place next year, so that a lot more of those seats can be used? There is certainly no better place to sit.

There is no doubt that having the flexibility to really make an endless amount of changes is one of the best things about the man-made facility. There are some similar tracks on the schedule that have not been well-received. Assen, on the other hand, seems to be universally liked. Why is that? It is actually very difficult to point to a fault that the Assen TT Circuit has. It seems as though adding sand to a track like this really is the best thing to do, as it minimises the next for jumps and ensures that there are plenty of lines. It is almost like a compromise.

No matter what each person thinks of the track, there is no doubt that all eyes will be fixed on the Dutch venue this weekend. Jeffrey Herlings will wrap up the championship in the first race, unless disaster strikes, and create an atmosphere that is unforgettable. It will be an amazing weekend and one that is really worth following on MX Vice.