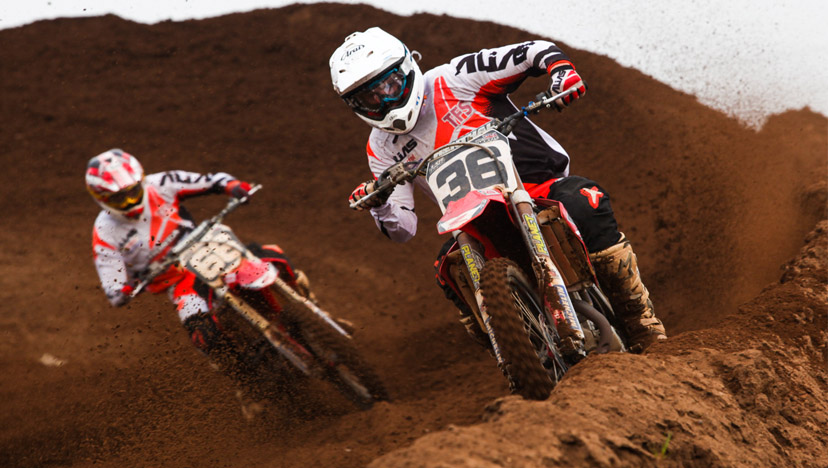 After a top ten result in Norfolk the weekend before, JAR Honda trekked to Doncaster’s Fat Cat Motoparc for the second round of the MX Nationals on Easter weekend.

Qualifying on Saturday afternoon saw both team riders in the same qualifying group; Matt Moffat finished the session with a fourth, while Lewis Tombs ended down slightly, in twelfth.

For both riders, the weekend proved to be trying; Tombs definitely got the worst of it. After a mid-pack start in the first race, he found himself without a clutch only a few laps in whilst in sixth, making it impossible to continue in the deep sand. To make matters worse, the second race on the weekend ended with Tombs stranded with a bike that wouldn’t restart, while he was in sixth again. The final race didn’t go without a hitch either; whilst in fifth he went down, costing him three places and putting him eighth across the finish line. Two DNFs still scored points though and Tombs ended the weekend in twenty-first.

His crash in the second race notwithstanding, Moffat put in great performances across the entire weekend. The first race was a consistent run that started in ninth and ended in seventh. The second race looked to be a repeat of the first, only to end with ten minutes to go. The last race was a meteoric rise from the back of the pack to eighth at the chequered flag and a thirteenth overall on the weekend.

For Moffat this was not the end though. A quick drive to Birkenhead ended with a trip on an overnight ferry to Northern Ireland, where he was entered into the opening round of the Ulster Championship. Once there, he qualified in second behind local star Graeme Irwin.

The first race there got off to a good start, in sixth, but Moffat found himself having to recover four places before continuing his rise up the ranks after a small crash in the third lap. He ended that race fourth. The second race improved again; here Moffat soon found himself in the hunt for the lead, taking over with minutes left on the clock to the end. The final race was another start in the top ten with a strong rise up to second at the chequered flag for a second overall on the weekend.

Horrible weekend! I did three laps in the first race and my clutch went, so I DNFed, in the second race I was riding alright and was around fifth MX2 when with two laps to go the bike stopped. In the last race I had a decent start, was around fourth MX2, was actually going alright and then had a big crash, and rode around like an amateur and that was probably it for my bad weekend, which I can’t wait to forget about.

I had a good weekend, just the second race I had a DNF, had a big crash, but I had a seventh and an eighth and in the last race started dead last. I definitely had the speed to run up front, so I was really happy with that. I felt fitter than I felt at Lyng, I’ve been working on a few things from there. In the last race I came from the back as well as passed some good riders on the way, so I’m definitely looking forward to Foxhill and see how it goes from there.

We had so much potential coming into this round after such strong finishes recently. I’m gutted for Lewis as things just didn’t go his way this weekend. I think it’s best to take the positives from here and move on to Foxhill where we can regroup and build on what we have. Matt was riding strong all weekend and his lap times were good. It’s unfortunate that he DNFed race two, or we would have had a strong overall. He seems to struggle in the first half of the race but comes on really strong towards the end. We’re working fast to strengthen this area.