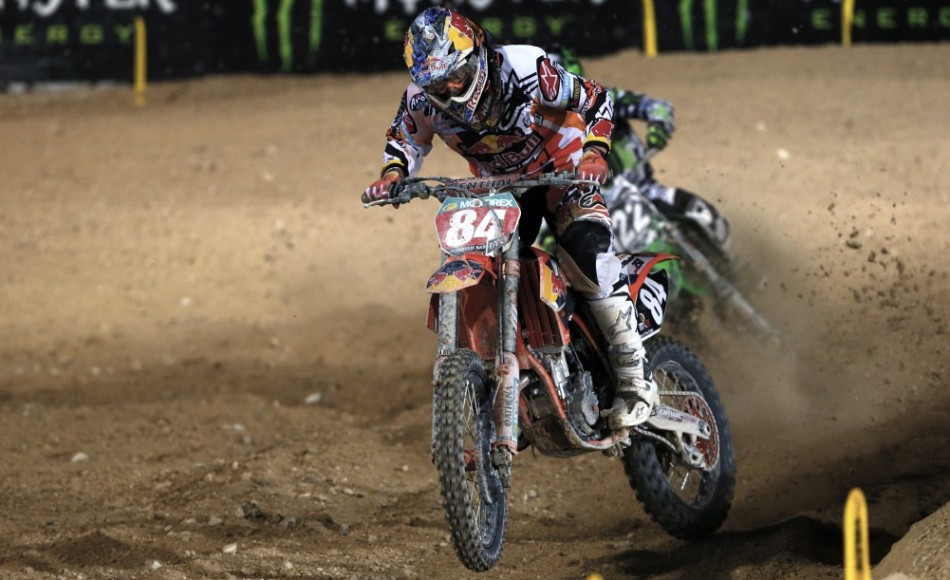 After a week of chest beating and public proclaimations of superiority, Jeffrey Herlings and Max Anstie look set to resurrect an old rivalry.

Anstie would travel to Holland at a young age to learn to ride the sand and it was there he met his rival Herlings, one and a half years younger, but already very fast. Anstie would beat the young Dutchman more often than not then but headed to America to learn supercross when he was in his early teens.

Herlings meanwhile stayed in Europe and by the time he was 15 was winning GPs in contrast to Anstie who struggled to make his mark when he went pro at 16 in America despite the odd eye opening resuilt.

Anstie came back to the GPs in 2011, but by then the tables had turned and Anstie, at 18 years old, was playing second fiddle to his younger rival Herlings. who was still only 16.

For the next three years Herlings beat Anstie, even lapped him in the sand, and won two world titles. As Anstie bounced around teams searching for the missing piece to unlock his potential, Herlings was being hailed as the best 250 rider in the world and the fastest sand rider on the planet.

Anstie had to watch his former rival now getting all the glory while he struggled, mired in the middle of a top ten of riders all resigned to getting beaten by the astonishing speed of Herlings.

Anstie though always maintained he was still as good as Herlings, even if the results suggested otherwise.

Then last week at Qatar, armed with the probably the fastest bike in the class, Anstie was seemingly on his way to a double victory until a mechancial problem in race one and a stall in race two prevented the Brit claiming 50 precious points and the championship lead.

Herlings meanwhile ended up winning the GP despite bad starts but was not happy with his performance. Two riders at completely different ends of the results page had contrasting thoughts on their riding performance -but it was Anstie who was pleased with his riding and Herlings fuming.

Herlings subsequently announced to the world his frustration at his performance saying he rode like an “amateur” and apologised to his fans for the way he performed. Herlings felt he should be beating his rivals by 20 seconds and vowed to make this right in Thailand.

Herlings wasn’t kidding around and promptly flew back to Belgium to get more bike time, something he has missed following his shoulder and then recent leg injury.

But Herlings isn’t the only rider who thinks he should be winning.

Anstie’s performance, along with finally finding a team and bike that he believes allow him to get the job done, have allowed the always confident Anstie to be even more outspoken.

In an interview on vurbmoto.com with David Bulmer, Anstie said that he was the best rider in the class and even Herlings knew it. Anstie seems 100% sure that this is his time to shine and that Herlings is going to have to take a back seat.

It has been a long time since anyone felt so strongly about their ability to beat Herlings and it perhaps gives an insight into the frustrations that Max has felt for the last few years watching him win. And for that Max has to be admired, to remain that self-confident despite getting beaten so many times is a pretty special quality.

However, if you are Herlings, already angry at his own display in Qatar, this will only add to your motivation. Herlings will be ready to annihilate his competition and Max Anstie in particular. The Dutchman is already annoyed that he gave his competition hope that they can win, so to read Anstie’s quotes will confirm his intention to set the record straight in Thailand.

In some ways this is reminiscent of James Stewart and Chad Reed in 2002. Reed claimed he could beat Stewart straight up outdoors and Stewart got fed up listening to it.

Finally at Unadilla they both got out front, with Stewart in the lead and Reed chasing. Stewart then slowed down, let Reed by then passed Reed back and won the race. Stewart said after he was sick of hearing how Reed could beat him and he wanted to prove he couldn’t. It was a big move for Stewart who at that time was only 16.

Herlings (or Anstie) might not go to those lengths but both riders have put their head above the parapet and claimed their superiority. Herlings of course has more credit being a two time world champion and having won the last 16 Grand Prix events he has competed in.

Anstie meanwhile has zero GP wins in three years, but amazingly seems to have the same level of confidence as Herlings.

In Anstie’s mind this is the first time he has had the bike to go show he is the best rider out there, Herlings meanwhile still feels he should be a level ahead of the chasing pack.

So who is right? Has Anstie stepped it up or was it just an off day for Herlings?

Going by the best lap times in Qatar, Herlings was the fastest in both races but Anstie was less than two tenths off Herlings in the first moto. In moto 2 however Herlings was almost one second quicker, but then again Anstie was managing the race out front and didn’t need to push as hard.

Like two posturing boxers searching for the mental edge before a fight, both Herlings and Anstie are claiming they are the best as they head into Thailand. Anstie feels he was the true winner in Qatar, while Herlings points to the fact he has the red plate and didn’t even ride well.

So who will give the knock-out punch? Or will it go all 18 rounds and be a tight points decision?

Thailand might just start to give us the answers but the rest of the pack, especially a rejuvanted Arnaud Tonus and moto winner Dylan Ferrandis, might just have something to say about it too!