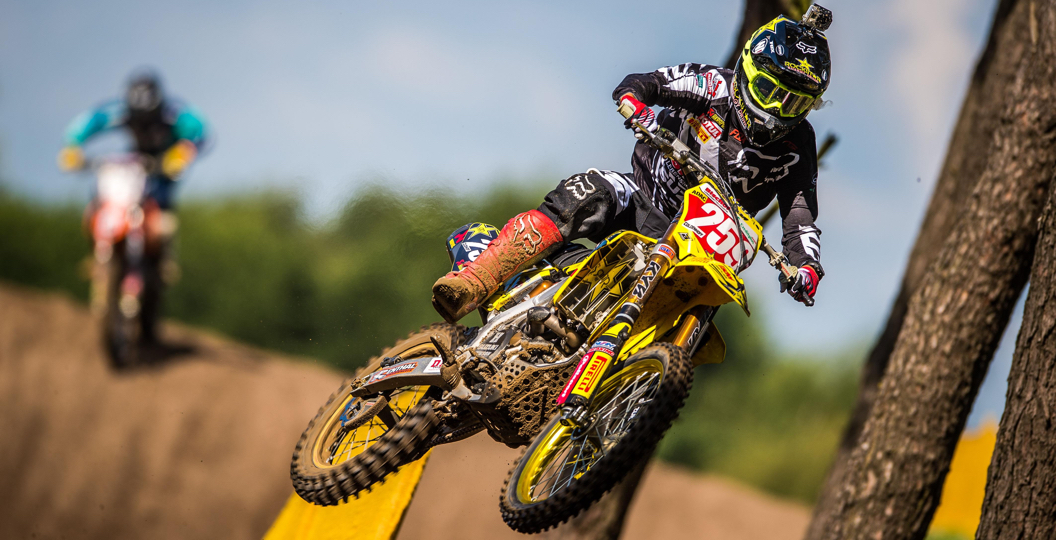 The penultimate round of the high-profile ADAC MX Masters series visited the circuit for the first time and while sunshine and prime conditions made for a perfect start to the weekend on Saturday, things changed dramatically on Sunday as ongoing rain transformed the sandy circuit into a very wet affair.

Coldenhoff arrived at his home race as a confident championship leader and the Dutchman showed that he had no intentions to play it safe in qualifying. “I am lacking an overall win from the past six rounds,” he said. “There´s no better place to finally make it happen than here. If I can secure the title prematurely, that´s certainly fine with me.”

Coldenhoff´s motivation helped the the 24-year-old to take maximum points on Sunday. The RM-Z450 rider owned the first race by 38 seconds ahead of his nearest rival. He found it a bit harder in the second heat, but eventually took the chequered flag first again, therefore sealing the championship on home soil.

“I am over the moon,” the new ADAC MX Masters champ said. “I´ve always stated that I want to win an overall at one of the rounds. To finally get it done makes me a happy man. Even more so as it happened here at my home race. Clinching the title prematurely is a big deal – for my Rockstar Energy Suzuki Europe Team and for myself. Thanks to all who helped to achieve this.”

And there was more reason to celebrate in the Rockstar Energy Suzuki Europe camp as Hsu completed the success by taking the ADAC MX Youngster Cup in the first moto aboard his RM-Z250. The German-Taiwanese ended the opening race in third position, earning him yet another prestigious international title. Hsu showed maturity by riding smart without risking too much in the wet and tricky conditions. “The aim was not to crash,” the 17-year-old confirmed. “I only started to realise the title win after the second moto, though. I am entirely happy.”

Hsu´s championship marks one more milestone in the teenager´s astonishing career as Hsu has by now rewarded Suzuki with two World and three European titles.

Jan Hendrik Breckwoldt, General Manager of Sales and Marketing at Suzuki International Europe, was on site to follow the action personally: “I am delighted that Suzuki has taken the two most important titles in German Motocross. Both championships have been decided prematurely in our favour with Glenn Coldenhoff crowned Masters Champion and Brian Hsu winning the Youngster Cup, which is a very nice confirmation of our work with young talent. Additonally, Dennis Ullrich and Jeremy Seewer are lying second and third in the Masters standings. The season couldn´t have gone any better for us.”

Bas Vaessen, meanwhile, completed the day with a third place in the Youngster Cup classification behind his team-mate Hsu. The Dutch teenager underlined he feels home in the sand, scoring a 2-6 result.

Team Castrol Power1 Suzuki Moto-Base rider Ullrich defended his runner-up position in the Masters category scoring eighth place in the first and a fourth place in the second moto. Coldenhoff´s predecessor left no doubt that he plans to attack at the final round. “As the reigning champion you want to defend your title. Unfortunately that didn´t work out, but I´m going to give it my best to end the season in the runner-up spot.”

Ullrich´s only remaining rival is his brand colleague Jeremy Seewer. The Swiss rider (6-5) scored identical points to Ullrich. He´s trailing the German by four points, meaning the battle for the vice title is wide open with two motos left in the series.

The ADAC MX Masters series finale will be held at Gaildorf on September 5-6th.