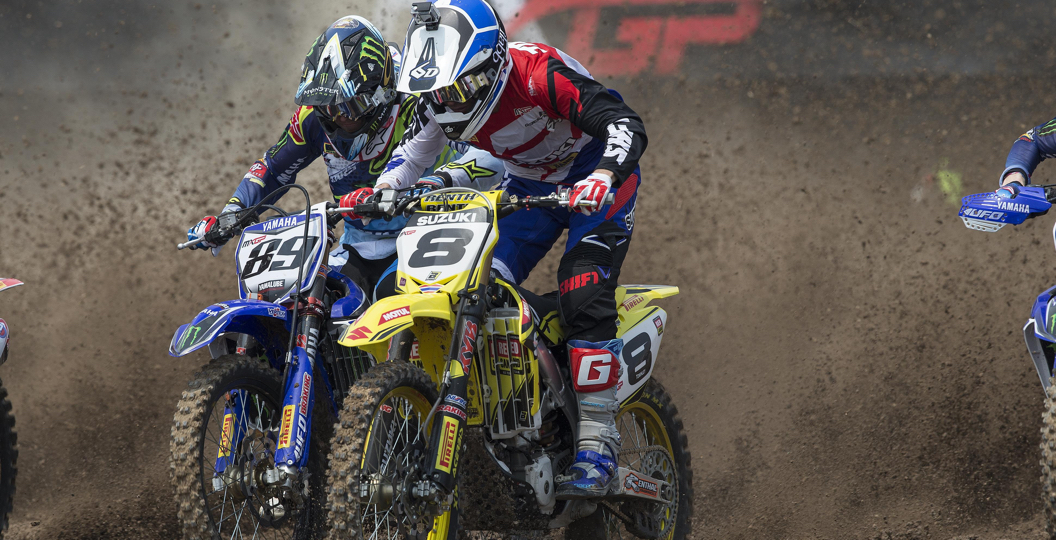 Team Suzuki World MXGP came within touching distance of their first overall podium finish of the season today at Suphan Buri and the Grand Prix of Thailand as Ben Townley scored second position in the second moto but rued a crash that forced his retirement in the first outing and placed him ninth at the end of the day; one position behind team-mate Kevin Strijbos.

The new layout in Suphan Buri meant the third circuit for the Thai MXGP stop in three years and a hard-pack, churned and dusty course was a demanding challenge for the Grand Prix elite. The deep ruts were hard to negotiate and combined with the high temperatures touching 40 degrees – more than double what the riders found in Qatar the previous weekend – cast the second round of 18 as one of the toughest fixtures of the year.

Townley launched out of the start gate from Pole Position and straight into fourth place with Tony Cairoli, Romain Febvre and Tim Gajser for company. The New Zealander was part of a quartet that set the pace at the front and was barely divided by more than three seconds for the first part of the sprint. The long, hard ruts provided a tricky technical test requiring precision and care while other hard-pack areas of the surface were slippery. Townley would ultimately be caught out on lap nine. The 30 year old slipped off the RM-Z450 and sustained minor damage to the handlebars. Despairingly Townley had to cruise back to the pit lane with a broken radiator that was causing the bike to lose liquid and meant that his race was terminal.

Strijbos persevered to eighth place after a poor start. The Belgian was 13th on the first lap and again battled set-up and arm-pump problems that continued to dismay the veteran. It was a similar story for the former double world championship runner-up in the second moto as he circulated to 11th place. Although he left Suphan Buri with eighth in the overall MXGP ranking #‘22’ was still far from the speed and results he feels capable of achieving.

Determined to make amends in moto two with the track thoroughly worn in the wake of the second and final MX2 outing, Townley was poised for better. The #‘8’ knew that his chances of an overall podium – his first since 2005 in Grand Prix – had gone with his mistake in the first race but BT was keen to validate his pace and potential once again at the highest level. He made light work of passing Shaun Simpson in the formative stages to capture second place and then carved out an advantage that saw him adrift of Febvre ahead but safely in front of Max Nagl in third. The final laps involved some heavy work for him – as for most of the MXGP field – but he motored home to a personal best so far in 2016.

“A good weekend for us started yesterday with Ben winning the qualification race and we continued working on the bike set-up across the team to find the best setting on this track,” commented General Manager Stefan Everts. “In the first moto he was holding a good position but unfortunately made a mistake in waves and it was costly. We were all a bit bummed by that but in the second moto he rode a fantastic race. Febvre was by far the best but Ben came back really well. Today we lost a possible podium but we have to look at it in positive way and at the progress we made since Qatar; this was also an important confidence boost for Ben.

“Kevin is still struggling with arm-pump and it is not coming together at the moment,” he added. “We’ll discuss it and sit together in the coming days. I think it will be good for him to get back in the sand for round three and maybe his season can really start at Valkenswaard.”

After the opening thrust of Qatar and Thailand in the MXGP campaign, Strijbos holds 48 points and rests seventh in the standings while Townley has 42 and sits in 10th position.

The Grand Prix of Europe will be held in the shallow and bumpy sand of Valkenswaard in the Netherlands in two weeks time and across Easter weekend meaning that the races will occur on the Monday holiday. The site is a relatively short hop over the Belgian border for the team and is one of two ‘home-ish’ events for the Suzuki crew on the 2016 slate.

Ben Townley: “I blew it. I made a mistake that caught me out of the blue. It was on the last roller and I was in the wrong gear. I was caught out by how slick it was and got ejected. I was up ready to salvage something but the radiator was damaged and I was lucky to make it back to the pits. In the second moto obviously the result was much better but it was tough. Someone jumped the gate beside me so I was late off the line. I started in sixth and worked my way up; I think I had a bit more spark than the other boys. In the end I gave everything I had and I had to talk myself through to the end. It was a mission. Overall I’m not concerned about the podium but the 18 points that I threw away. It’s really disappointing. We are still working on the bike quite a lot, and have made progress every session since starting in Qatar, but there is still work to do on the engine and suspension especially. Onto the next one.”

Kevin Strijbos: “I don’t know what to say any more. I feel sorry for the team who have worked so hard because we have changed the bike set-up so much. Nothing seemed to work. In the first race I had so much arm-pump that I could not hold on and it was the same in the second race. I’m not sure what is wrong. The winter went so well. I felt good and people were telling me that I was riding better than ever but it is not showing on the track. I have to believe in myself but once I’m on the track it is a mess. We have some time now before Valkenswaard to find a solution.”