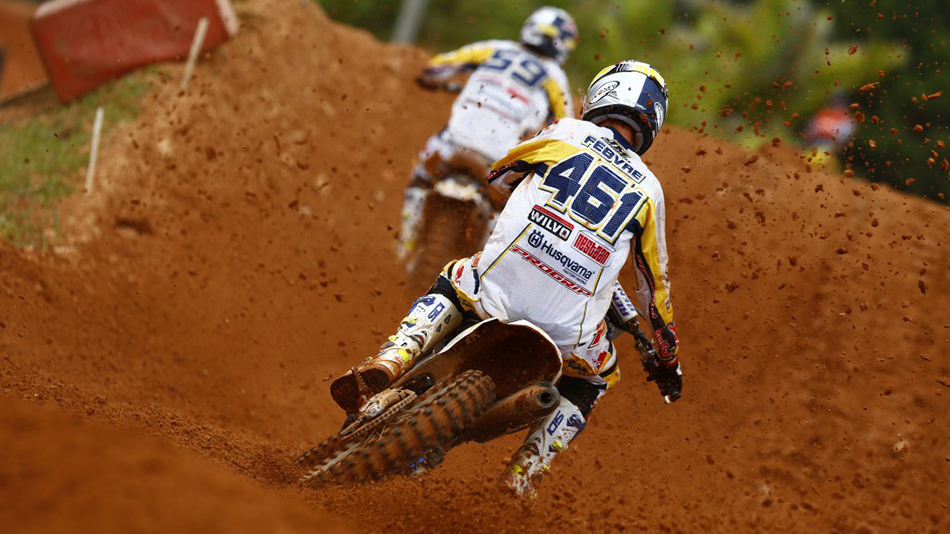 Strong Results for Husqvarna in Brazil

Securing Husqvarna Motorcycles’ highest overall MX2 class result in seventh Romain Febvre endured a mixed Brazilian GP. Sixth during the opening four laps in the first moto, he then slipped back to seventh before charging hard during the second half of the race. Powering his way to third at the flag, Febvre recorded a well-deserved top three result behind Arnaud Tonus and Dylan Ferrandis. Frustratingly in the second moto conditions worsened with Romain placing 11th.

Fast starting Aleksandr Tonkov rode hard to place sixth in the opening MX2 race, despite a fall that cost him three positions. Third for the first 12 laps of the race his mistake dropped him to sixth – a tough result having shown the speed to finish inside the top three. In the second race Tonkov blasted his way to a clear holeshot, and despite a fall during the closing stages of the moto placed seventh for eighth overall.

For Red Bull IceOne Husqvarna Factory Racing’s Todd Waters the GP of Brazil saw the Australian place seventh overall and in an impressive seventh in the first moto. Battling with the MXGP front-runners for the full duration of the race, Waters showed his best form of the championship so far. In giving the opening moto his all Todd was unable to push quite as hard in the second race. Nevertheless he finished 10th and having showed that despite his relative lack of GP experience he’s quickly getting to grips with the Motocross World Championship.

Pascal Rauchenencker competed in his second MXGP of 2014 in Brazil, as stand in rider for the injured Tyla Rattray. The Red Bull IceOne Husqvarna Factory Racing rider placed 17th in the first moto but withdrew from race two following several mistakes.

The FIM Motocross World Championship continues with round four in Italy (Arco di Trento) on April 13.

Todd Waters: “It’s been a tough GP, but I’m really happy with the fact that I was racing at the sharp end of things in the first moto. We’ve taken a good step forward and to be battling with the top guys for a full moto is great. I gave the first moto everything, and I guess I was a little drained in the second moto. I’m still getting used to the GP format. I feel I showed my true potential in the first moto, but the second race was hard for me. It’s been an amazing GP, more like a supercross with the crowds being so close to the track. After the first three GPs I feel like I’ve learned so much and we’ve made some great steps forward with the bike. I’m looking forward to racing in Europe now.”