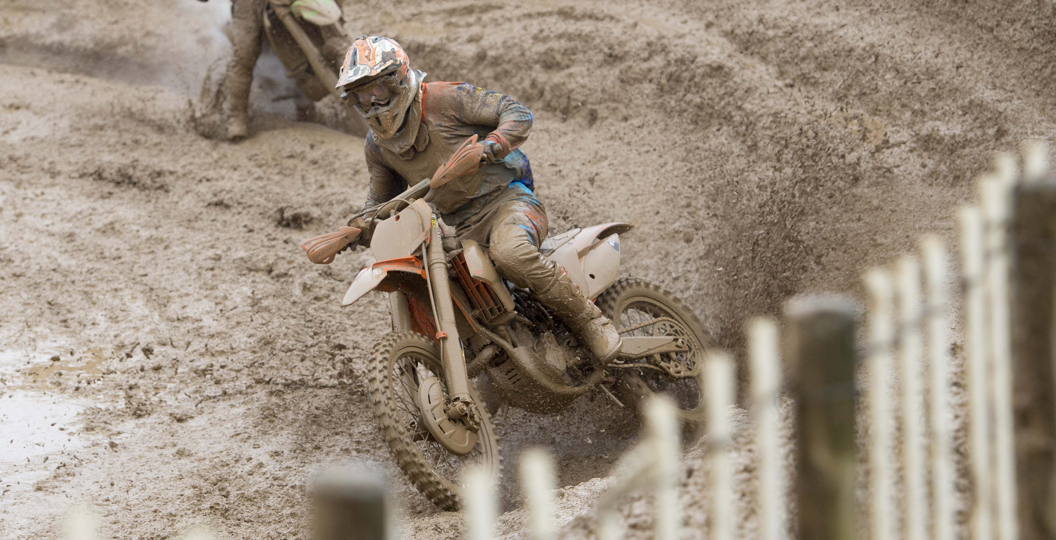 All three riders were looking forward to their first official outing as a team after enjoying great weather leading up to the event, so it was a huge disappointment for the riders and spectators alike to arrive to a weekend of relentless rain and a mudfest on-track.

MX2 – Race 1
In the opening MX2 race, Sterry dropped down the first hill in 8th position after the start and after initially losing a couple of places he managed to get back into 9th where he remained throughout the race.
MX2 – Race 2
Sterry made a superb start in race two and was in 2nd place as they crested the first hill but overall winner Jonas jumped across his line, dropping him down to 4th. Sterry settled into a rhythm and amazingly held off reigning world champion Tixier lap after lap before eventually giving ground, however he was still riding superbly and continued to tail Tixier until a lapper then completely filled in him and he was unable to see in the sea of mud. Sterry discarding his goggles managed to get back to business and impressively held off the advances of Sewer until the flag to take a brilliant 5th place for 6th overall.
MX1 – Race 1
With this round being his return to racing following last season’s injury, Nicholls start didn’t quite go according to plan and he hit neutral out of the gate and then crashed at the first corner. With the Brit in last place he fought hard in order to find his way through the field to move up to 11th. Meanwhile, teammate Frossard was battling within in the top five early on but crashed twice in quick succession to leave him in 9th at the finish.
MX1- Race 2
Nicholls made the decision to sit the second race out so as not to risk the chance of injury in the precarious conditions.

Frossard gating in 6th and improving to 4th rode a sensible race, settling-in and doing just enough to hold off a late charge from Strijbos. His 9 – 4 race finishes gave him a 6th place overall.

Commenting after the race Team Manager, Steve Turner said: “It was always going to be a tough weekend with the weather like it was here. We had a good test and was hoping that the track conditions would be better, but we at least having something to build on for the next round.”

The team now stays in France for another week before taking on their second international at La Capelle Marival.