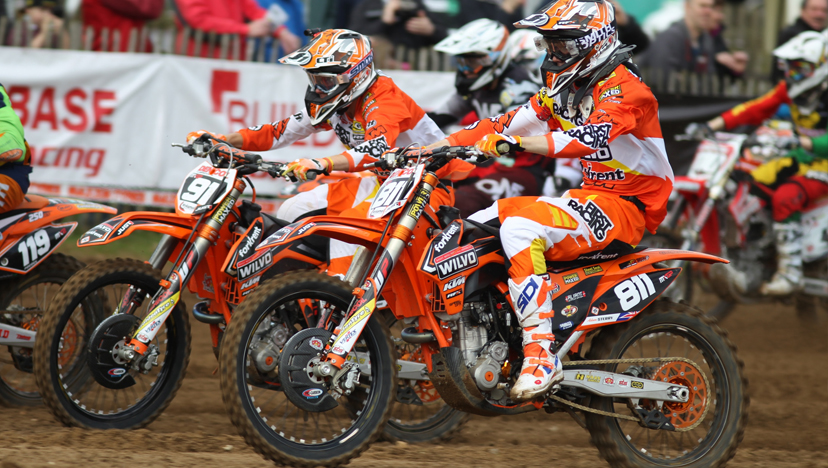 Lyng, UK, 7 April 2014: Lyng in Norfolk marked the scene for the second round of the Maxxis ACU British Motocross Championship for the Wilvo Forkrent KTM team. After an impressive start to the season at the opening race at Landrake, all three riders were looking forward to a good days racing, none more so than Jake Nicholls at his home round.

Qualifying:
The morning qualifying saw both Matiss Karro and Adam Sterry head out onto the track first for the MX2 session. During the first part of qualifying, Karro was producing a number of fast laps and took pole with Sterry chasing his back wheel as he posted a fourth fastest time. In the Superpole session Karro maintained his pole position, while Sterry moved up to second.

In the MX1 class Jake Nicholls took pole in the first session but a small mistake on the superpole lap saw him drop down to fourth place.

MX2 Race 1:
The gate dropped and Sterry stormed to the front of the field and set about making a gap for himself. Unfortunately Karro’s opening lap was not to be as rewarding due to a crash that pushed him back to 15th place. At the front, Sterry came under pressure from Pocock but was able to break away to take his first ever MX2 race win, while Karro would suffer two more crashes and unfortunately finish disappointed in 9th place.

MX2 Race 2:
The second race saw Sterry once again rocket out of the start and take the early race lead with Karro just behind in third place. Sterry continued to lead for the first few laps until a mistake saw him drop to third, while Karro moved into the lead. Once in the lead, Karro never looked back and took the victory by over five seconds with Sterry finishing in 5th place.

MX2 Race 3:
The final MX2 race of the day saw both riders start in the top five and continually push forward. Karro once again rode a smart race and moved into the lead by the halfway point resulting in a victory. For Sterry the third race would see the youngster crash whilst running in 3rd place and recover to finish the race in 6th.

MX1 Race 1:
The opening race of the day for the MX1 class saw Nicholls start out of the gate in 2nd place and quickly move to the front at the end of the opening lap. Once in the lead, Nicholls started to create a gap over the field until a small problem forced the local star to slow his pace and settle for 2nd rather than risk not finishing.

MX1 Race 2:
When the gate dropped for the second race, Nicholls got a perfect start and took the holeshot. With a clear track ahead of him Nicholls quickly settled into a comfortable rhythm and started ticking off the laps. Simpson was on Nicholl’s rear wheel the entire race and just couldn’t find a way past. Nicholls held his position and nerve to finally take the win by two seconds.

MX1 Race 3:
The third and final MX1 race of the day saw Nicholls suffer the worst start of the day starting in tenth but by the end of the first lap he had moved into 6th position.

As the race progressed, Nicholls worked his way back into the group of riders ahead and made some aggressive passes to move through to 3rd. Ultimately time ran out for the East Anglian to mount a serious challenge on Simpson so had to settle for a hard-fought 3rd place finish.

Nicholls finished the day in 2nd overall behind Simpson and remains second in the championship points standing just five points off the Red Plate.

At the end of another impressive day for the Wilvo Forkrent KTM team, Steve Turner, Team Owner and Manager commented: “It’s been a similar day to Landrake with Matiss taking two wins and Jake one but both ending up second.

“Jake rode great and could have had the overall if it wasn’t for a small technical problem in the first race which meant he had to give up the win, but he is only five points behind Simpson in the championship and I’m sure it’s going to be a season of long battles for supremacy.

“Matiss made the same mistakes in race one as he had in race three in Cornwall which cost him another overall, but thankfully he took on-board what we discussed in between and rode two sensible races to take two wins. Unfortunately it wasn’t enough to take the overall but meant he ended up only two points off the top step and the Championship lead.

“Adam made a huge step forward this weekend, taking his first ever British Championship win in style. He had great speed but for a few mistakes in the second and third races he would have been standing on his first podium.”

Matiss Karro, MX2 class, second overall said:
“The first race was really bad as I crashed three times. I was third off the start and some of that is due to the other guys being lighter than me, then I crashed on the first lap and it messed with my head. I then crashed twice more and could only finish 9th which I’m not happy with.

“Going into the second race I knew that I was the fastest on track and didn’t get the start but settled down and rode smarter to get into the lead and take the win. The last race I started 4th and then moved into the lead and took another win. Now I’m confident in my speed that I can take my time in the races and still win.”

Adam Sterry, MX2 class, fourth overall commented:
“Qualifying went really well as I followed Matiss around and set a really quick lap and then in Superpole I went faster and took second place. Second gate pick meant I had a good start all day and took two out of three holeshots.

“The first race I took a start to finish pole and I was so happy to get my first race win in. Then in the second race I got the holeshot but made three mistakes by stalling, crashing and jumping over a berm which dropped me down to fifth. The last race I was third off the start and had a high side on one of the jumps which cost me three places. I’m a bit disappointed not to get the podium today but I’m so happy with the race win and am looking forward to the first European now.”

Jake Nicholls, MX1 class, second overall added:
“It’s been a pretty good day, two good starts in the first two races although it’s a shame about the third. The first race cost us the overall today as we had a problem with the chain and I had to slow the pace a bit. The second race it happened again on the final laps but I pushed hard and could see the support from the local crowd and took the win.

“The last race I didn’t get the jump and had to pass a few guys before I could really settle into the race. Once in third I closed up on Shaun after his tumble but I couldn’t find that extra bit needed on the rough track to get by.

“I’ve come away from today with second overall and just five points between me and Shaun so that is good going into the next round.”