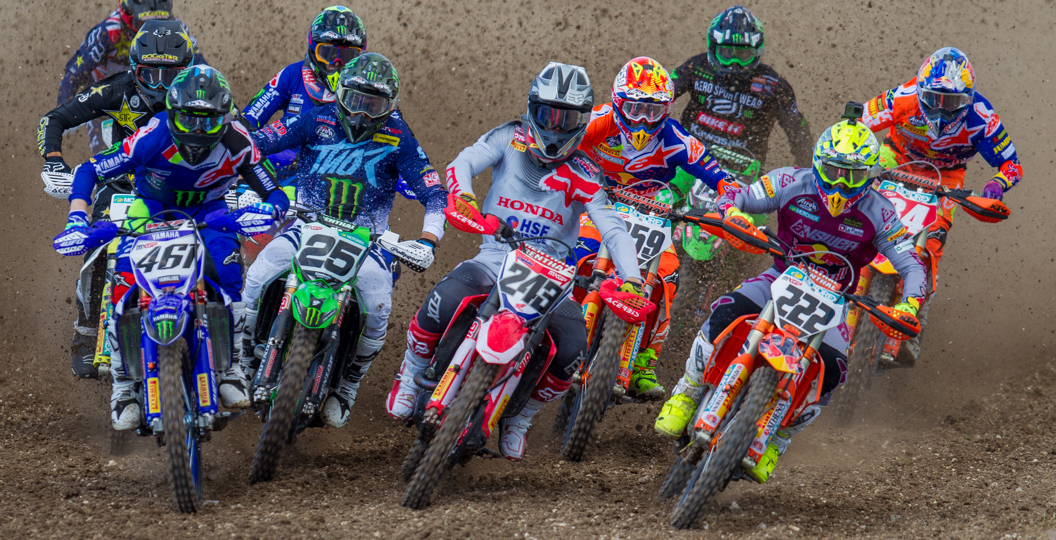 – It was a constant game of cat and mouse in the premier division at Matterley Basin. Antonio Cairoli tried to escape that early on in the second moto, however, as he consistently laid down the quickest lap times of the race. Cairoli did that on four laps in succession, laps three to six, but then Jeffrey Herlings responded with the best time of the race on lap seven. It was an intriguing period that is highlighted in the table.

– Antonio Cairoli responded on laps eight, ten and eleven and minimised the damage. Honestly, it seemed as though that was enough to clinch the win and maybe he believed that. Jeffrey Herlings found another gear right at the end though and set the best time of the race on the penultimate lap, then went even faster on the final lap. This period is also focussed on in a table, which can be viewed below. Take note of just how close the times that the eventual winner posted on the final two laps were.

– If there is one point that cost Jeffrey Herlings time all weekend, it was in the first sector. Antonio Cairoli would be slower on certain laps, but still gain time on that part of the track! Herlings finally started to match him on that part of the track towards the end of the second moto and, incredibly, found another gear on the final two laps. The difference was just incredible and can be viewed below. Unbelievably, he believes that he did not actually change lines or anything and just pushed harder. It goes to show how much these guys have left in the tank.

– The way that the second moto played out was almost identical to the final moto at the Grand Prix of Patagonia-Argentina. Jeffrey Herlings charged hard to pass Antonio Cairoli for the victory on the final lap there and set the quickest time of the race at the very end. Although most onlookers were amazed that he managed to do that at Matterley Basin, it is fairly common for him to unearth some incredible times right at the very end. It is his signature move in the timed sessions each week!

– Across the two motos at the Grand Prix of Great Britain, twenty-eight laps were run. Jeffrey Herlings was faster than Antonio Cairoli on exactly half of those and then the roles were reversed on the other fourteen laps. The difference is that the advantage was greater when Herlings threw down blistering times, hence why he was able to gain the ground that he did, as the facts above confirm that his glass ceiling was higher on the day. It is still quite impressive that Cairoli had the potential to respond to him consistently.

– Seeing as Jeffrey Herlings only made the pass for the lead on the final lap of the second moto, his advantage at the chequered flag was just over a second (1.150). It is hardly surprising that that was his smallest advantage in a race this season. Herlings has, however, experienced a closer finish since his move up to the premier class, as his lead over Antonio Cairoli in the first moto at Assen last year was around a tenth less (1.010). It can get close at the head of the field!

– When Jeffrey Herlings climbed up onto the box at the Grand Prix of Great Britain, it marked the one hundredth time that he has stood on the podium in the FIM Motocross World Championship. The fact that seventy-four of those trips to the podium have been victories is just remarkable, as it means that he has finished in either second or third overall just twenty-six times. It is also worth noting that Herlings has taken part in one hundred and twenty-five rounds, at this point in the season, so has only missed the box twenty-five times in his career.

– Fifty-four sessions have been run this year and, in total, Jeffrey Herlings has sat atop the leaderboard in forty-one of those. Talk about dominance! Antonio Cairoli, his main competition, has been up at the top in just five of those sessions. How does that compare to the first nine rounds twelve months ago, which was the beginning of the year that he claimed his ninth championship? Cairoli was first in ten of the first fifty-four sessions. This statistic acts as a reminder of just how great Herlings has been so far.

– There was a great battle raging on behind those top two in the second premier-class encounter, as Tim Gajser and Romain Febvre scrapped over third. Clement Desalle eventually joined that battle as well, following a fall early on, and eventually slotted into fourth. All of those riders were evenly matched, just as the table below shows.

– Romain Febvre returned to the overall podium at the Grand Prix of Great Britain, despite the fact that he should not have even been racing, thanks to the thirty-six points that he pulled in. It was the first time that he stood on the box since the penultimate round last year, which was two hundred and sixty-seven days ago. This was also just his fifth trip to the podium in the last two years. To put that into perspective, he ended on the podium at five rounds in succession during his title-winning season.

– Tommy Searle actually had some respectable starts at the Grand Prix of Great Britain. It seems like an eternity since he last ended lap one inside of the top ten! However, the last time that he did was at that same Grand Prix in the USA. It is also worth noting that the race, which was run at Glen Helen, was also the last time that he started both motos inside of the top ten, something that he failed to do on Sunday.

– One would typically expect there to be a Rockstar Energy Husqvarna Factory Racing in that battle, but it was difficult day for those riders. Max Anstie was the best-placed rider on white machinery, as he claimed tenth overall, whilst Gautier Paulin limped to eighteenth in the overall classification. When was the last time that the latter was that far back? It was in The Netherlands six hundred and forty-five days ago, when he acquired five measly points across the two motos for nineteenth overall.

– Alessandro Lupino acquired a season-best finish of seventh in the second moto at the Grand Prix of Great Britain. Who else managed that on Sunday? That was it! With so many riders returning to action, it is hardly surprising that the deeper field stopped some guys from improving on their recent rankings.

– It seemed as though Jorge Prado was going to pull a move similar to Jeffrey Herlings in the opening MX2 moto, as he begun to inch closer to Pauls Jonass in the closing stages. The difference was quite clear. However, in the end, Jonass held on to take the moto victory by eight tenths of a second. It was certainly close, but that is not the smallest advantage that he has had this season.

– The roles were reversed in the second moto, however, as Pauls Jonass was put in the position of the hunter. It is quite clear that he was deserving of the victory, as his times were considerably faster and continued to be even after he made the past. The current series leader eventually held on his for his fifth clean sweep of the season. The table below highlights that period in the second moto.

– Now that Pauls Jonass has claimed eleven overall victories in this class, he is sat comfortably in seventh on the list of all-time winners. If he goes and wins again at St. Jean d’Angely, which will host the tenth round of the current campaign, he will tie with Ken Roczen for sixth with twelve wins apiece. Three more victories would help him move alongside Marvin Musquin and Tommy Searle in fourth in the record books. It is actually possible that he will go even further than that before the end of the year.

– With nine rounds in the rear-view mirror, KTM have a lead of eighty-eight points in the manufacturer standings. When was the last time that they had an advantage as great as that at this point in the year? They actually had an advantage of one hundred and twenty points twenty-four months ago, thanks to the phenomenal talent that is Jeffrey Herlings. ’84’ single-handedly built up that significant advantage over Kawasaki!

– Calvin Vlaanderen put his CRF250RW up onto the box for the second round in succession, much to the delight of Team HRC. When was the last time that actually happened? It was at rounds sixteen and seventeen three seasons ago, when Tim Gajser finished first in The Netherlands and then backed that up with a runner-up finish in Mexico. The Japanese manufacturer have actually experienced a lot of difficulties in the smaller class since then.

– Ben Watson had plenty of work to do on home soil, as poor starts hurt him in each moto. Watson actually made more passes than anyone else on Sunday, which is not too surprising, as he passed ten guys in moto one and eight in the second encounter. Those figures were recorded from the end of lap one, so he actually gained more ground than that. Tenth is his average starting position across the first eighteen motos of the current campaign.

– The speed that Watson possessed in the second moto was simply phenomenal, as he was around two seconds quicker than those ahead of him at points. The table below does a good job of highlighting that. There is no doubt that he could have been on the podium, had he gotten out of the gate, but this was still extremely encouraging, as it summed up just how far he has come.

– Marshal Weltin smashed his career-best finish at the Grand Prix of Great Britain, as he recorded a solid fifth in the opening moto. Who else managed to acquire their best finish of the season on British soil? Iker Larranaga Olano (sixth), Anthony Rodriguez (ninth) and Richard Sikyna (nineteenth).

– Conrad Mewse has had a difficult four-moto period in the FIM Motocross World Championship, as he has scored just seven points. This is actually similar to the first four motos a year ago, which was well-documented as a terrible time for him, as he scored just six points at the opening two rounds. What is the point of this statistic? It just offers a glimpse at how tough things are currently and also offers reassurance that he can escape the slump, seeing as he managed it last year.

– Adam Sterry returned at the Grand Prix of Great Britain, after missing the previous two rounds, and showed some potential. The heat hit him hard after the first moto, however, and he required treatment, which stopped him from competing in the second and final moto. Matterley Basin marked the third time this season that he has only scored points in one of the two motos at a round.