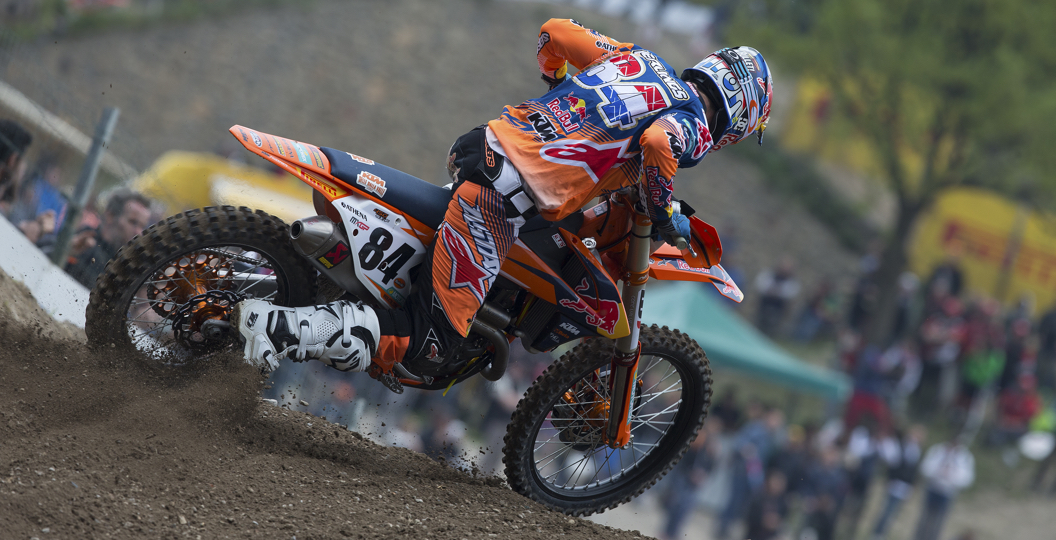 With the FIM Motocross World Championship in the rear-view mirror, now seemed like a perfect time to reflect on all that happened this year and dive a little deeper into the results. There is obviously a lot that goes on at each stop on the MXGP calendar and, as a result of that, certain things get overlooked, so here are some intriguing statistics that may have got pushed to the side.

– A common theory amongst FIM Motocross World Championship pundits is that Antonio Cairoli trudges along through the monotonous Saturday programme and turns it up as soon as the gates drop for moto one. Although some statistics support that, the fact that he had more pole positions than anyone else this year does not. Six was his eventual total across nineteen rounds. Jeffrey Herlings had five, but more consecutive pole positions than anyone else, then Tim Gajser had three. Max Anstie, Arminas Jasikonis, Clement Desalle, Shaun Simpson and Arnaud Tonus all appear on the board with a single qualifying victory.

– How does the above compare to previous seasons? Tim Gajser started from pole position at eight of the eighteen rounds a year ago, whereas Antonio Cairoli managed it just three times. Cairoli had the most pole positions the season before that, however, as he managed it four times and once more than the eventual champion, Romain Febvre.

– Excluding last year and his sophomore season, where he missed out to Clement Desalle by just one, Antonio Cairoli has had the most pole positions every year that he has competed in the premier division. The current world champion has actually sat on pole forty-nine times in total since joining the MXGP class. Clement Desalle has the next highest amount, sixteen, through that same period.

– Antonio Cairoli referenced the fact that he backed his training down towards the end of the season in an MX Vice interview, but was that reflected in how he tackled the races? Cairoli completed one hundred and sixty-four laps during the practice sessions through the first half of the season, then did twenty less than that in the final portion. The difference is not large enough to draw too many conclusions from, but perhaps there is something that can be taken from this?

– Antonio Cairoli, Tim Gajser, Gautier Paulin and Clement Desalle were the only ones to stand on all three steps of the podium across the season. Jeffrey Herlings did not manage it though, as he never actually finished third overall. When did he actually last land in that position on the overall podium? Well, believe it or not, it was at the MXGP of Europe in 2011. That was two thousand two hundred and eighty-four days ago.

– Jeffrey Herlings was a little late arriving to the MXGP podium, as it took him six rounds to find his way onto the box. The Dutchman was a firm fixture in the top three from that point on, however, and actually almost had more podiums than anyone else. Eleven was his total across the season, which was just one less than Antonio Cairoli. Who is next on this list? Tim Gajser and Gautier Paulin with seven apiece.

– Jeffrey Herlings may not have led the way in that category, but he did have more heat wins than anyone else this year. Herlings won twelve across the season, whereas Cairoli managed to reach the chequered flag first on nine occasions. Herlings had more clean sweeps than anyone else too, as he won both motos at three of the rounds. Cairoli and Tim Gajser managed that just twice.

– Seeing as this is a regular feature on MX Vice, certain statistics have been revisited across the season. A popular one was breaking down the premier-class standings from the fifth round on, as that was the point that Jeffrey Herlings started to turn things around. How would the standings look now, if you eliminate those first four rounds? The table below offers a brilliant look at that and highlights just how competitive Herlings was once he worked through the teething problems.

– Gautier Paulin was the only rider to score points in every single moto that was run this year. It was far from easy for him though, as he had to claw his back to twentieth for a single point in the first moto at the USGP. How does this compare to previous years? Two riders, Antonio Cairoli and Evgeny Bobryshev, managed it twelve months ago. Romain Febvre and Glenn Coldenhoff managed it the year before that.

– Who led the most laps at a single round this season? Tim Gajser claimed that title, as he led all thirty-six laps at the Grand Prix of Leon-Mexico. Most forget just how unstoppable the former champion was at that point in the season. Surprisingly, no other rider led every single lap at a round. Jeffrey Herlings came close to it, as he led thirty of the thirty-four laps that were run at the Grand Prix of Latvia. Arminas Jasikonis managed to maintain his position at the front of the field on the other four laps there though.

– Tim Gajser was not overly impressive towards the end of the season, but still managed to lead one hundred and sixty-two laps across the season. Antonio Cairoli led one hundred and eighty-six laps in total, so there was only a gap of twenty-four between the two. Cairoli obviously led more laps than anyone else, as he featured at the front at twelve of the nineteen rounds. What about Jeffrey Herlings? He led one hundred and forty-three.

– Just how good was Tim Gajser through rounds three and four? Gajser left the Grand Prix of Leon-Mexico with an advantage of twenty points, which is the highest gap that a rider has had at that point in the season in four years. Things quickly unravelled for him, of course, but it may be worth remembering that fact when it comes to previewing the new season.

– Clement Desalle ended the FIM Motocross World Championship on the sidelines, which was obviously far from ideal. However, despite that misfortune, this was still one of his most successful seasons. Desalle did not score points in four of the races, whereas last year he did not manage it in seven of the premier-class encounters. That seems bad, of course, but the year before that was particularly difficult for Desalle, as he either skipped or did not score in twenty of the thirty-six motos.

– Max Nagl has suffered with consistency issues, much like Clement Desalle, but is on quite a roll currently. Before this streak that he is working through, his personal record was contesting twenty-three events in succession and he managed to match that at the Grand Prix of Qatar in February. Nagl obviously made it to every round following that and has now smashed his personal record, as he has attended forty-one rounds in a row. That is quite an achievement for the former Husqvarna pilot.

– A final note that is always rather intriguing. For whatever reason, Glenn Coldenhoff always comes alive in the second half of the season. This year was no different, as Coldenhoff has a consistent presence in the top five towards the end of the year. That is reflected in the table below.