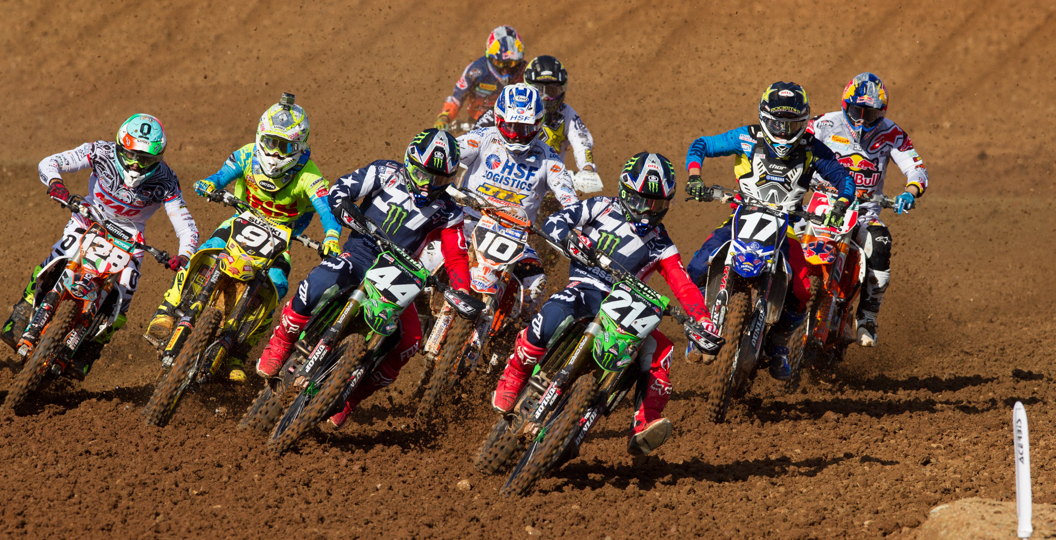 – The way in which Eli Tomac won was impressive, sure, but just how dominant was he? Tomac was the fastest man on track on twelve of the eighteen laps in the first MXGP moto and eleven of the eighteen in the second. Obviously he backed it down towards the end of each race, so those statistics could have potentially been even more noteworthy.

– The two moto victories that Tomac acquired earnt Kawasaki their second consecutive overall win in the premier class. When did the guys in green last win two in a row? Gautier Paulin won the back-to-back rounds in Bulgaria and Portugal early on in 2013.

– Monster Energy have obviously benefitted from the wins that Clement Desalle and Tomac have acquired recently, as they now have five MXGP victories this year and have edged ahead of Red Bull (who have three, thanks to Antonio Cairoli). Rockstar have one, which means the other eight rounds that have been run were won by riders that are not labelled with an energy drink logo (or at least were not at the time, in the case of Tim Gajser). In this day and age, where energy drinks are all over the paddock, that is quite peculiar.

– Tim Gajser rebounded from a disastrous day in Assen with a strong second overall in Charlotte, but he missed the overall win for the fifth consecutive round. How long has it been since Gajser was missing from the top of the box for that long? Well, he has not actually experienced a drought like this since he won his first overall in MX2 in April last year.

– A fourth in moto one on Saturday was more than enough for Gajser to clinch the MXGP title three motos early, which was obviously his priority, but he has also been unstoppable in another category. ‘243’ cannot be beaten in the Tag Heuer ‘Best Lap’ standings, no matter what happens at Glen Helen, as he leads Romain Febvre by four points.

– Speaking of championships that are locked up already, Honda have already clinched the MXGP manufacturer title. They lead Yamaha by seventy-three points heading into the final round, so nothing will change there. Yamaha, however, are just fourteen up on KTM, so that would be the battle to watch as far as manufacturers go! If KTM do not move up a spot, it would be their first time outside of the top two since 2008.

– Jeremy Van Horebeek returned to the box for the first time in one hundred and eighty-two days on Saturday, thanks to a pair of strong rides that left him third overall. It was not actually too surprising to see him perform so well in the motos, as he went fastest in the free practice session earlier in the day for the first time since the German fixture in May.

– It is fair to say that Romain Febvre has been mediocre since returning from injury, but just how far is he from the level that we saw him at prior to Matterley Basin? Through the first ten rounds his average moto finish was a third, but through the last five rounds it has been a disappointing eighth. The speed is clearly there though, as Febvre recorded lap times that were competitive with Tomac at points in Charlotte.

– Marco Maddii was, amazingly, the only MXGP regular who recorded a season-best finish (twentieth) in Charlotte. The wildcards obviously made it tough for a guy on the bubble to breakthrough.

– Aside from a fourth-place finish in moto two in Assen, Max Nagl has been average at best since Switzerland. The finger injury that he sustained at that point does not actually seem to be the issue anymore, as he simply admitted that he could not run the same pace as the frontrunners in Charlotte. Nagl is eager to rebound in Glen Helen, however, as he has a chance of finishing top three in the points for the first time since 2009! That is quite a drought.

– What happened to Justin Barcia in the second moto in Charlotte? He landed heavily, jammed his wrist and that was that! It was a rough day for JGR actually, aside from the runner-up spot that Barcia acquired, as Phil Nicoletti crashed out of moto one also. The team are not scheduled to compete at Glen Helen.

– Antonio Cairoli has rebounded somewhat in recent weeks with a win in Switzerland and visit to the podium in The Netherlands. Charlotte was not good to him at all though, as he limped to a thirteenth and fourteenth whilst battling an illness. When did Tony last finish both motos but do that poorly? That has not happened at all in the last thirteen years! Sure, there have been races where he crashed out of one moto and scored less points on the day (like at Valkenswaard last year).

– Gautier Paulin and Valentin Guillod are arguably the two European riders who are the most eager to impress the American industry, but neither of them had good days in Charlotte. Paulin withdrew from moto two after twisting an ankle, but should be good for Glen Helen, and Guillod could not finish moto one after encountering some breathing problems.

– Aside from the two rounds where he scored no points (the Czech Republic and Switzerland), the GP of Americas was the worst event of the season for Jake Nicholls. After finishing seventeenth in moto one, Nicholls was unable to add more points to his total in moto two after his seat came off.

– Through laps nine to sixteen, Cooper Webb was considerably faster than both Austin Forkner and Jeffrey Herlings. That surge really came out of nowhere and even Webb himself could not put a finger on what caused it. What made it even more intriguing was that he hardly shined in moto one, although he was the fastest man on track on six of the nineteen laps that were run.

– Webb put a Yamaha on the top of the box for the first time all year in MX2 and also strengthened their fight for a top-three ranking in the manufacturer standings. Yamaha stayed in fourth, thanks to Webb, but will have to rely on Benoit Paturel and Brent Van Doninck to make up the six-point gap to Suzuki at Glen Helen.

– Speaking of the manufacturer standings, KTM have unsurprisingly retained their crown in the MX2 division. The 2016 season could tie their most dominant in the last nine years, which is how long their streak has been going for, if Herlings picks up two wins on Sunday.

– Thomas Covington quietly had the second-best race of his career on Saturday, as a brace of fourths left him with thirty-six points on the day. The only other time that he has scored higher than that on a single weekend was in Mexico last year. Perhaps he always comes alive at the penultimate event? Covington is also on track to achieve a career-best ranking in the overall standings.

– No MX2 regulars managed to achieve a season-best finish in MX2, surprisingly, which is the first time that has happened all year. Like in MXGP, the wildcards would have made that more difficult.

– Calvin Vlaanderen seems to thrive at the flyaway events, for whatever reason, and did it again on Saturday. He broke into the top five in a moto for the fifth time in his career and also did that in the overall classification, which was only the second time that he has managed it.

– If Jeremy Seewer can finish both motos in the top twenty this weekend, he’ll be able to hang his hat on the fact that he is the only MX2 rider to have scored points in every single moto. That streak has been in jeopardy the last two weeks, actually, as he has had an average finish of eleventh, whereas his average through the first fifteen rounds was a fourth.