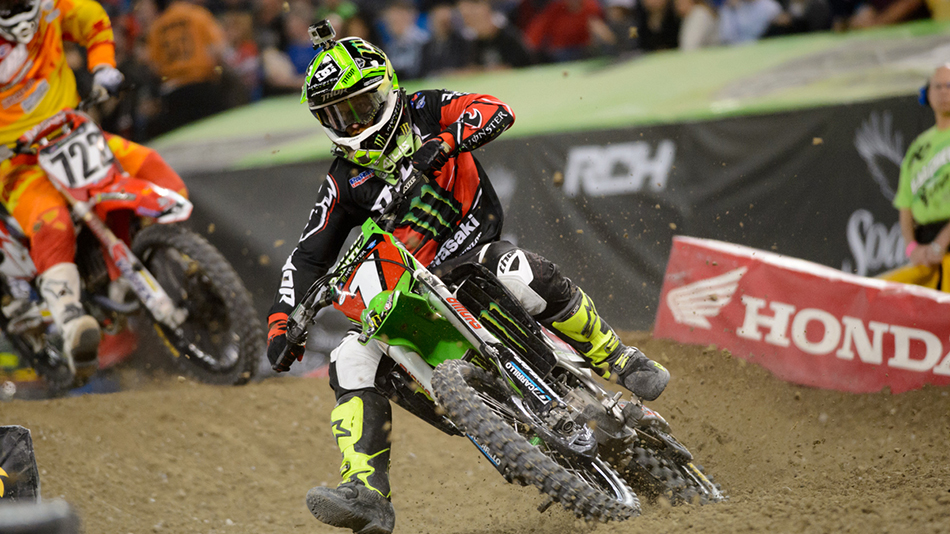 Ryan Villopoto is once again in a position to wrap up the 450SX title one round early, despite the fact that the class is the most stacked that it has ever been, according to most. However, there has been a clear difference for RV this year, as he hasn’t been the dominant figure that he usually is, although the points may tell a different story.

Overall, he has won just three main events thus far this year, and one of those was the unique Daytona race. In comparison, Ryan had won eight of the rounds at this stage last year, and in 2012 too. Although there is a clear drop off there, this isn’t because he has lost the edge – I believe that RV has just altered his approach slightly, as he is seemingly more concerned about the points, rather than the individual race wins.

Now, this is something that all of the champions adopt, as they grow older, it seems. There is no need to push it sometimes, as the risk outweighs the reward, and the bigger picture is the main concern for the riders in the thick of the title fight. Villopoto said exactly the same after the St. Louis main event, as he told Jim Holley “it is give and take. Tonight we gave a little for the first place, but gained a lot in the big scales of things.” I am sure that most of you believe that he was discrediting James Stewart’s win, with comments like that, right? But, in the next breath he states that the St. Louis main event winner was very good.

It has become quite apparent in recent years that Ryan Villopoto does not thrive on the slick tracks, because he steers with the rear wheel, so he is constantly searching for traction. At a few of the venues that are notoriously hard-pack, it is clear that he has no intention of going over his personal limits. After all, he did not win at any of the Anaheim rounds, and looked a little lackluster at Arlington. However, at most of these rounds he showcased the speed that is required to win, he just elected to take what he could get.

At this point in the series, his worst result is a sixth; you have to think this is because of that approach. I am intrigued to see if Villopoto maintains the same mindset moving forward, as pride will surely take over at some point. When RV has straight up battled with Stewart this year, James has come out on top more often than not. How long will it be before Ryan feels the need to prove that he is still faster than the Yoshimura Suzuki rider?

The Monster Energy Kawasaki rider does not need to win another main event this year – he could just collect podium finishes at the remaining rounds, take the title and go into Glen Helen one hundred percent. After all, James isn’t really a threat in the championship chase anymore. Although some fans believe that he has a shot, Ryan would have to do something very silly for that to happen, and as mentioned previously, he knows exactly what he has to do to succeed, which will make it tough for anyone to beat him this year, or in the future.