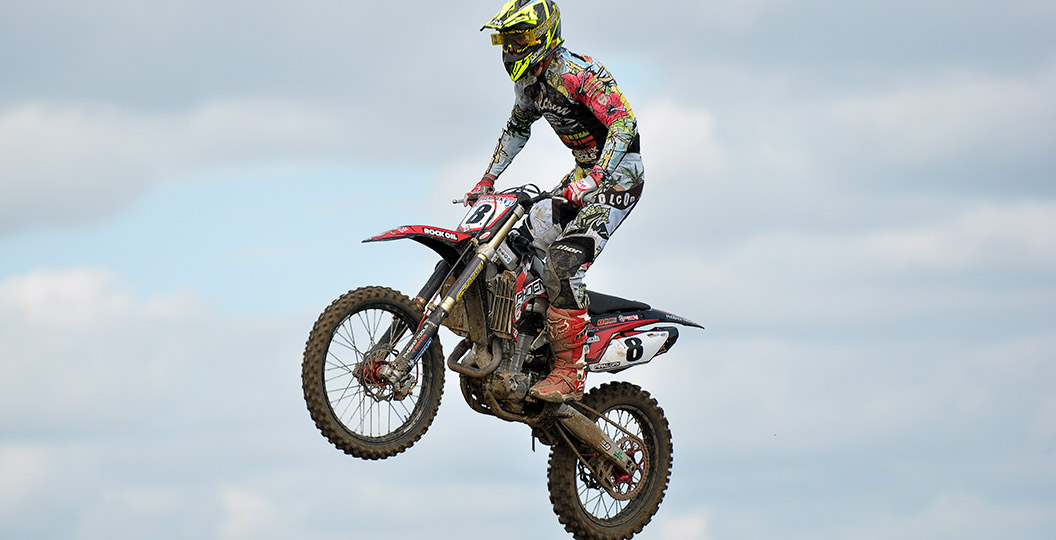 There was no mistaking the intentions of both racers as Snowy jumped to the top of the qualification table as Luke had a problem with his race bike which meant he had to immediately jump on his spare bike to register his own fastest lap, taking him to second spot down to the line.

Moto 1 was clear-cut for Snow. He came around turn one cleanly and pulled away to easily hold a 20 second lead, cruising at the finish to take the win. Hawko` however made it hard for himself, battling through the pack from a mid-field start to finish an easy second at the close. Kelvin Townsend raced into the top-ten, suffering from arm-pump in the closing stages and Ben Butler rounded of the Phoenix quartet just outside the top ten.

The Moto 2 first turn was a cut-throat place to be, with Hawkins getting a fantastic jump off the start to come across the pack and enter the first turn in the lead, however his team-mate saw the turn differently and barged his way through to exit turn one in the lead, demoting Hawkins to third in the process. Luke was quickly back up to second and the pair began to pull away, comfortably gapping the rest of the field. At the halfway stage, Hawkins and Snow were together and 22 seconds ahead of the third place but Snowy plied on the pressure from the front and a gap appeared between one and two, finishing this way at the flag. Townsend and Butler finished just inside and just outside the top ten respectively.

Snow disappeared out in front once again in Moto 3, with Townsend second and Hawko` third. Hawkins was soon up to second, though some seven seconds behind and Kelvin was having a great ride in third. At the halfway stage, Snow dropped his bike on a rutted left-hander and Hawkins saw the chance and closed up. Snow gathered himself and after three laps, re-established his lead which he held to the flag. Hawkins was an easy second, though Townsend drifted back to 8th. A rock in the rear brake of Butler ended his chances of a top-ten finish.

With two more Phoenix Premier rounds remaining, even with double points awarded for the final round, Luke Hawkins only has to remain second to Snow in all his races to retain the Champions No.1 plate. Snow must win all the races and Hawko` must make an error to stand a chance of the number one spot for 2015.

The next outing for the team is at the final round of the ACU Maxxis British Championship at Foxhills in two weeks where both Snowy and Hawko` can move up the table to secure their best ever National Championship rankings. It will be one to watch.