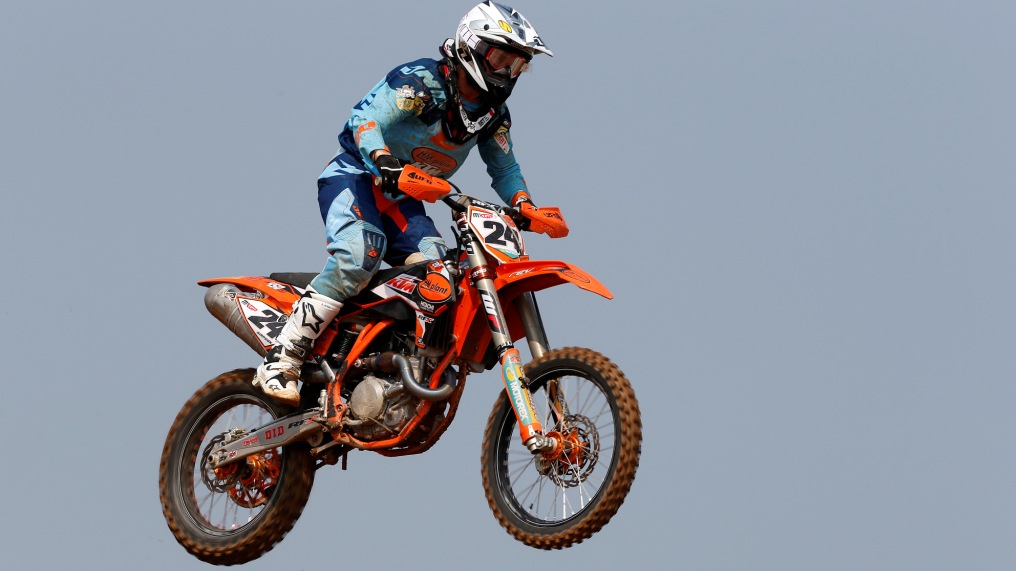 HM Plant KTM UK ended the first stint of flyaway Grands Prix in the 2014 FIM Motocross World Championship with an intense and sweaty trip to Si Racha for the Thai stop on the eighteen round calendar. Shaun Simpson made a positive impression in his second appearance for the team in the premier class, MXGP, and on the 450SX-F by taking the first moto holeshot and fronting the pack for two laps, eventually going on to secure 9th overall after a dramatic day.

Having flown from Qatar the previous weekend straight to the nearby city of Pattaya Simpson and Mel Pocock (again in MX2 and on the 250SX-F) encountered 35 degree temperatures, humidity and a fast and flowing layout. The British duo had time to adapt to the climate but the track was a demanding and difficult prospect that placed heavy importance on the start.

Simpson already shone on Saturday. In slightly cooler air compared to the furnace of Sunday the Scot held off Tommy Searle for a battling fourth position and one of the team’s best qualification results in the blue ribbon category.

The opening race witnessed ‘24’ showing the quickest pace around Si Racha in the formative stages. Simpson was entrenched in the group disputing podium positions and was enjoying a scrap with Qatar GP winner Gautier Paulin until the French Kawasaki rider made an aggressive move in a corner that clipped the former British Champion’s front wheel and sent him tumbling into the dirt. Simpson picked up the KTM and restarted in sixth place but stalled his engine on the penultimate lap to lose another slot to Max Nagl (a moto winner at Losail).

Nursing some pain in the top of his hand and later ruing a wrong tyre selection for the second moto Shaun had a tougher time in the second 30 minute and 2 lap affair. He again got out of the gate brightly but some hesitancy in the first laps – the opposite of his performance earlier in the day – saw him lose ground and slip outside of the top ten. Simpson rallied in the latter phases of the moto and 11thby the flag contributed to his overall ranking. The consequence of which puts him 12th in the MXGP World Championship standings.

Mel Pocock continued his adaptation to the 250SX-F and a set of mediocre starts did not help his cause for top ten finishes. The 2012 European Champion was 15th and 14th on the day for 12th overall and is feeling his way into the campaign.

With Grand Prix in Qatar and Thailand crossed off the list HM Plant KTM UK can now return to Europe where preparations will begin immediately for the first fixture of eight in the Maxxis British Championship. Simpson and Pocock are expected to be leading candidates for the MX1 and MX2 titles and will be joined by the full compliment of the team with the other riders focusing on national and European duty.

Shaun Simpson: “Ups and downs today but there are definitely plenty of positives to take away from this weekend. The speed is definitely there and I hadn’t pulled a holeshot in three years. It was nice to be back at the front and I felt comfortable. I felt that my pace was OK to run with the front guys. I could hear the gaggle of Kawasakis coming and I had a nice wee battle going with Paulin until he just wiped me out. He wasn’t even in front of me and just cut across the line and put me down. I tweaked my wrist quite badly and I have this sharp little pain in my hand…not great for a track with a lot of hard landings. That bothered me in the second moto and I was riding too defensively, losing lots of positions. I got a second wind and made some progress but I’m a bit disappointed how it all unfolded. 24 points today and 12th in the Championship; so positives to take. The bike was solid all weekend and there were a lot of guys having problems in the heat. Anyway, we’ll go back and re-group. We’ll build a bike and head across for the first round of the British at Landrake; a track I like. At the moment it looks like I have the edge in speed over Jake and Matiss but when you don’t have a couple of guys between you then it can be a different story. It will be nice to come away with an overall and carry on the momentum into Brazil.”

Mel Pocock: “In both motos I didn’t get terribly good starts and didn’t make much progression in terms of coming back through. I guess I am struggling a bit with racing the KTM as the moment. It was a hard weekend and a hot one. I need to fight the whole way through the race and I’m working on getting up to that.”