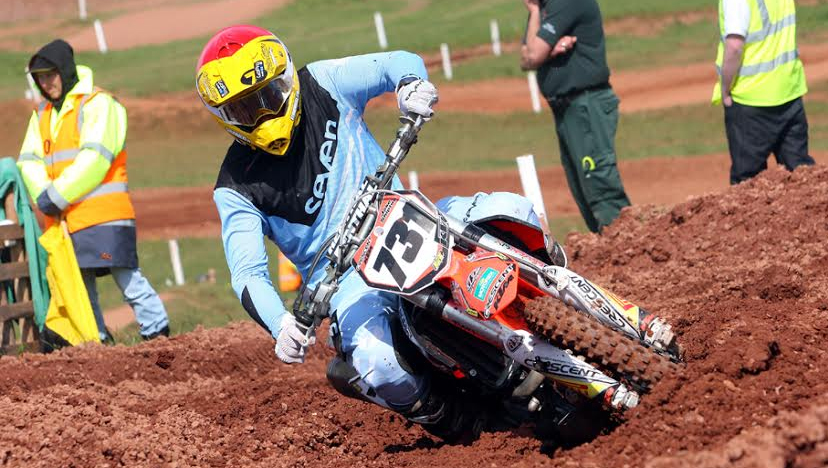 Last Sunday the Phoenix Tools Premier Motocross Championship resumed after a lapse of 5 weeks with round 3 taking place at Crediton Raceway. The track had a bit of everything with some soggy patches to begin with and some really dry bits which had to be watered during the day, but never the less there was some excellent racing to be witnessed.

In the Phoenix Tools Expert Open class it was Alex Snow on the Phoenix Tools Rocket Honda who had set the fastest time in qualifying, but only by a whisker from team mate Luke Hawkins, but 3rd fastest was Jake Shipton on the Crescent Racing KTM who looked like he meant business. In the opening race it was Hawkins who led in to the first corner closely followed by Shipton and wildcard Aaron Poolman, but things were soon to change as Shipton got the better of Hawkins on the opening lap and was starting to get away. Snow hadn’t had the best of starts, but was soon breathing all over Hawkins after getting the better of Poolman. Shipton had pulled out a 3 second lead by the end of the second lap, but all eyes were on Snow and Hawkins who were having a real tussle with Snow eventually getting pass Hawkins on lap 5. Jamie Skuse on the Tony Maunders Racing Suzuki was now moving up through the field and was soon up in to 4th after a long battle with James Dodd and Sunny Thompson, but he wasn’t going to catch the three in front of him as they were well gone with Shipton taking the win from Snow by some 13 seconds. In the second moto Shipton led from the off from Snow and John May on the St Blazey Husqvarna with Shipton again soon in to cruise mode as he started to get away, but it wasn’t long before Snow started to reel him in, then on lap 3 Snow was to take the lead after Shipton went down on a right hander. Hawkins had made up for not the best of starts and had got the better of Skuse and was now up in to 3rd but well back from the leading two. Shipton did his upmost to try and close the deficit on Snow especially on the last lap, but in the end it was Snow who took the win from Shipton a close 2nd and Hawkins a distant 3rd. Going in to the last moto Snow and Shipton had a win a piece so the overall was still up for grabs and there was no messing from Shipton in this one as he hit the front straight away and with a clear track used it to great advantage and was getting away from Hawkins all the time, but Hawkins had other things on his mind as Snow was all over him like a rash early on desperate to get pass as not to let Shipton get too much of a lead. Well it wasn’t until lap 3 that Snow got through in to 2nd after a mistake from Hawkins and had now set his sights on Shipton. Snow was lapping nigh on a second quicker than Shipton mid race and was soon in striking distance until on lap 8 of the ten lap race where Snow stalled his bike exiting a lefthander which was to let Shipton get away again and from there he was to go on to take the chequered flag with Snow 2nd and Hawkins again having to settle for 3rd.

In the Over 35 Championship class everybody was asking could anyone beat Championship leader Nick Life on the Gibbs Performance St Blazey Yamaha, well the answer would be no as Nick holeshot all three races and dominated the proceedings from the Front. Keith Hanson was going well in the opening moto, but a last lap mistake cost him dearly as Jamie Deadman, Stephen Elford and Martyn Tucker all went past him and he was relegated back down in 5th. In the second moto Elford played 2nd best to Life as did Deadman in the last moto with Life winning by over a minute in both races.

In the over 40 Championship class there was no stopping Championship leader Chris Brown on the TwoNineTwo Factory Touch Honda who notched up a fine hat trick of wins and in the Over 50’s it was Championship leader Mark Gleadhill who won the first two motos, but a spill on the opening lap in the last race was to put pay to him making it 9 race wins out of 9 which in the end saw Adrian Toy take the win.

In the Tyremarks Junior Championship class there again was some really good battles, especially in the opening race where there was a good battle between Ross Churchill and Jordan King with King passing Churchill on the last lap only momentarily though as Churchill came back in the closing stages and regained the lead, then King gave his all at the last corner, but went down and Churchill took it. The second moto saw Churchill take a tumble which saw the Red flag come out which was to end Churchill’s day as he had put his shoulder out. Cameron Packer had the holeshot in the restart, but this was short lived as Olly Jones took over on the opening lap and was followed by Championship leader Jack Stevens and Josh Turner. Stevens and Turner both passed Jones early on and were to have a real ding dong for several laps with Turner eventually taking the win with Stevens a close 2nd. The last race again saw a good battle early on between Turner and Stevens with Turner eventually easing away, but not all was lost for Stevens as Turner was to stall his bike on the last lap which was to gift Stevens the win that has now increased his Championship lead to 52 points.