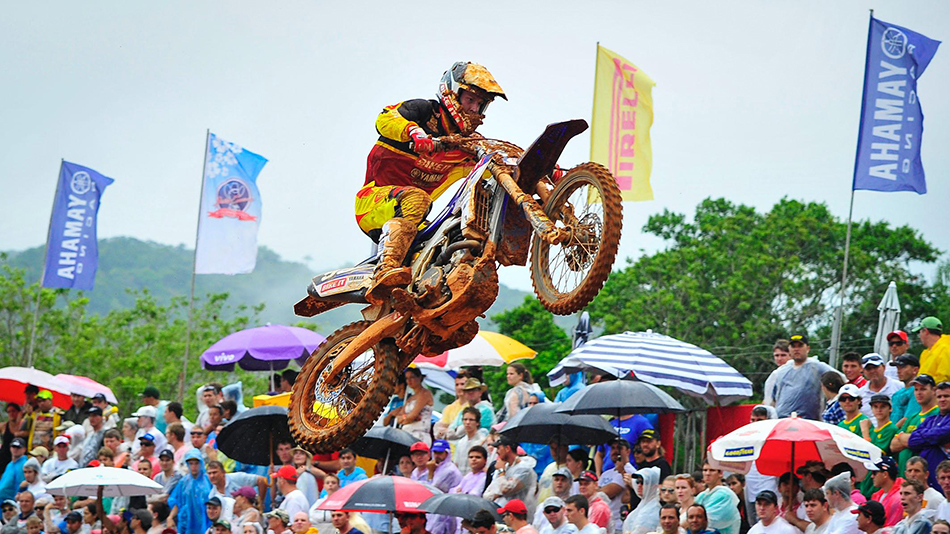 Second podium in a row for Anstie

Bike it Yamaha Cosworth’s Max Anstie continued his bright opening to the FIM Motocross World Championship in the MX2 class and on the YZ250F by classifying third and ‘on the box’ at a stifling Beto Carrero for the Grand Prix of Brazil; the third consecutive flyaway in the 2014 contest. The distinctive red hard-pack of the compact and jumpy Beto Carrero layout was a reasonably happy hunting ground for the young Briton and his acute technical skills as he collected his second garland in just three events.

Yamaha travelled to Brazil after initial fixtures in Qatar and Thailand and without the presence of former European Champion Christophe Charlier who was recovering from minor surgery on his right leg. Anstie was flying the ‘blue flag’ three weeks after sealing his maiden podium finish of the season in Thailand and was again a force to be reckoned with.

The Brit staked his claim for the rostrum with second position in Saturday’s Qualification Heat. Several short but strong showers on Sunday meant the Beto Carrero curves carried many ruts and difficult bumps and berms but Anstie was fearless in his pursuit of more glory. ‘99’ didn’t have the best of starts and was part of a six rider battle for second place in the first moto. By the chequered flag he had captured fourth position and in the second race a rather uncomplicated but progressive run to another top four result assisted in his final ranking of third. Anstie now holds 7th position in the MX2 standings and is just 20 points away from 4th.

Elsewhere Kemea Yamaha Racing’s Petar Petrov was sixteenth overall (the Bulgarian powered to 8th from a bad start in the first moto and retired with a bike problem in the second) while Australian Champion Luke Styke was 13th for his highest GP result yet in his rookie MX2 season.

Max Anstie: “I had a lot of wheelspin at the start and had to come back from last in the second one. It made things difficult. I thought it would be a mud race at one point. It could have swung either way. We will keep banging away and finding the feeling to do well. We will build from here. We have got some testing to do when we get back but I feel we have made a big improvement from Thailand to here in terms of set-up. Any track whether it is supercross, sand, hard-pack, Lommel or Italy I will go fast; it is what I like to do and what we will do.”

Petar Petrov: “Just another disappointing weekend. As in the last races I believe I had the speed to make a great result. In the first race I had a good start but I messed-up going way too wide in a corner. I lost a couple of places and I was riding really badly for ten minutes. After that I managed to pick up the speed and I had a great feeling. I could make easy passes, found the right lines and was enjoying my riding. In the second race my start wasn’t too bad but some crashes in the first corner cost me. The feeling from the first race came back and I could move up fast. I was in around 8th position after the first lap when the bike started losing power and my race was finished. I’m really bummed but I will look forward to Arco di Trento. I know I have the speed.”

Luke Styke: “I feel like there is improvement on the way. There is still a long way to go but I’m getting closer to the rest. My condition is getting better and better and I managed to score my first points. It’s just a matter of all pieces falling together in the right place.”