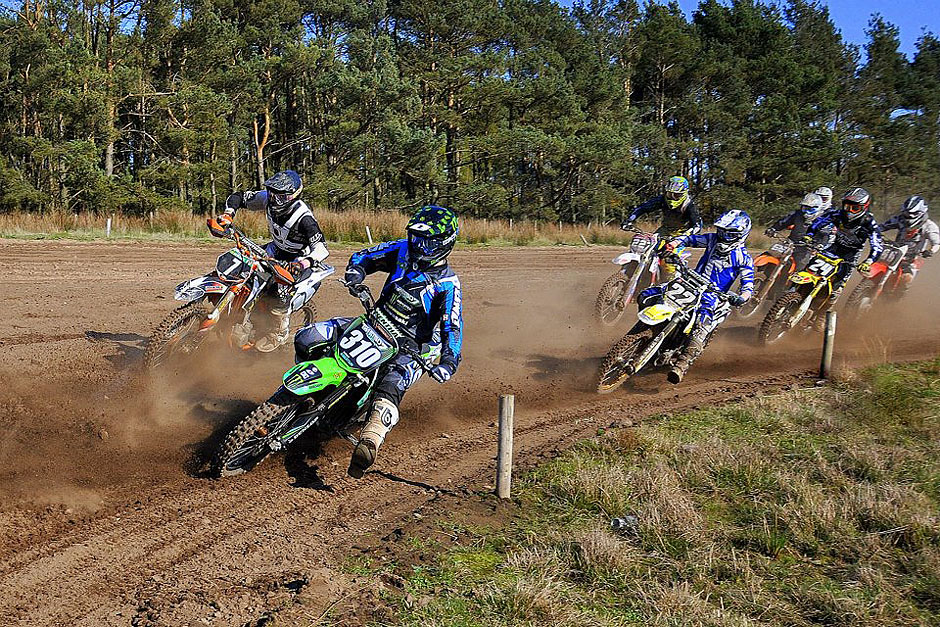 Following on from a superb weekend at Round 1 at Leuchars in March the Scottish Youth Motocross entourage had to make a hasty return to the Comerton Farm facility in Fife to hold Round 2 of the SACU Scottish Championships.

This event was originally scheduled to be run at the Fife Community racetrack at Cardenden, but due to the horrendous rain in Scotland all week this track was unfortunately waterlogged and therefore unsuitable for the weekends race programme, so a swift and suitable alternative had to be found. A quick phone call to the owners of the Comerton Farm racetrack in Leuchars Fife secured the use of their superb facility for the weekend’s racing action.

Even despite all the rain over Scotland during the week the track at Comerton was immaculate to say the least and it certainly looked supreme as it awaited the start of the first race in the superb April sunshine.

With the adult’s races scheduled for the Sunday the youth classes had their day of glory on the Saturday’s race programme.

Still it was pretty heavy going for the little Auto’s in the deep Comerton sand, although Jay Clark had no such complications as he took the overall victory on his very quick KTM. Logan Hendry did well enough to secure the runner-up spot from Jack Young in third. Braden Batley did well enough despite the deep ruts and soft sand and still managed to finish in a very respectable fourth place.

In the 65cc class Troy Anderson enjoyed the soft sandy racetrack well enough to finish in the top spot at the chequered flag. In the runner- up position Ryan Thomson tried his heart out to catch Anderson over the three legs , taking a win in the second mote and a second overall finish was reward enough for his hard day’s graft over what was a tricky racecourse for these little bikes. Kyle McNicol on his KTM filled the last podium spot in third from a very determined Owen Hendry on an almost identical machine in fourth. Wee James Haddow was equally impressive in fifth as it was hard going for these youngsters trying to dig their little bikes through the deep sand and ruts.

The 85 S/W mounted riders were equally quick compared to their big wheel counterparts and still put on a show for the many spectators that had lined up along the extremities of the course. RJ MacKenzie was the quickest rider in this class on board his KTM from Scott Russell in second. Dylan Carnegie was always up there with the front runners and brought his Honda home to a fine final podium spot. Robbie Saville did some early running at the front in this class in race one and two but the fourth place finish would be just rewards for his hard day’s work.

The 85 B/W boys went superbly quickly in the Fife sunshine with exciting racing between Ben Edwards and Lewis Houghton on their KTMs. Houghton grabbing the overall victory for the day as he kept Ben Edwards at bay during the final two motos despite Edwards great ride to a first race win. Edwards was extremely quick over the three legs, the second place finish would suit him perfectly and leave Ryan McNicoll to finish in third. Scott McLean was very impressive over the three races and really deserved a better overall finish than fourth, but with Elaine McEachern in close proximity and trying to catch him he would still be very happy with his final overall result.

In the 125cc Youth class the Scottish motocross stars of tomorrow had their chance to show off their skills on some extremely quick racing machines. Kieran Hunter was the man on a mission here as he rode to the overall victory on his YZ Yamaha 125. Robert Bell was on the pace all day but could not do enough to take the win and the runner up spot would have to suffice. Lewis Campbell was the best of the rest with a third place finish on a borrowed bike come the final whistle.

The big boy’s MXY2 class saw some spectacular riding from Thomas Robertson over the three legs. Robertson would emerge the victor overall from Jack Taylor in second. DeeJay Bruce filled the last spot in third but was still extremely quick nonetheless. Douglas Campbell is one to watch for the future as he dogged the front runners all day but finished just outside the top three when the chequered flag was waved.

The Adult Support class was the highlight of the day with Scott Findlay taking the overall honours for a very fine and polished performance on board his YZ250 Yamaha. Peter Mitchell was the eventual runner up in this class from David Houston in third. Peter Taylor’s four-banger Yamaha was showing  some impressive style in the deep rutted sand at Comerton and a well earned fourth place overall was a justifiable result for  the YZ mounted veteran.

With the track conditions and weather as near to perfect as you could wish for and despite the sudden upheaval with the last minute change of venue it still turned out a truly professional and exciting round two S.A.C.U event at what is a first class motocross facility at Comerton Farm.

Round 3 of the series continues at Lochgilphead on the 2nd & 3rd of June , for entry forms and further info visit www.sacumx.co.uk.