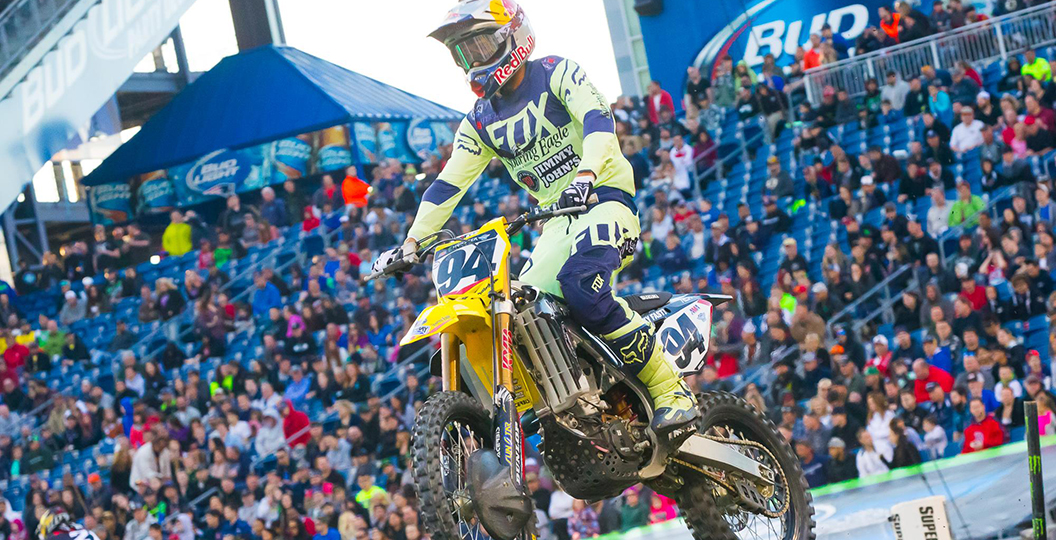 The Soaring Eagle/ Jimmy John’s Suzuki RM-Z450 rider needed a win to keep his title hopes alive and Roczen did exactly that, dominating Round 15. He proved his mettle throughout the day and the 21-year-old German’s RCH-prepared Suzuki RM-Z450 was easily the fastest machine across the 22-rider field, with Roczen picking-up five points to narrow the gap on series leader Ryan Dungey to 43.

“I feel like I’m one with the bike and that’s been the difference,” explained Roczen following his eighth career Monster Energy Supercross win. “We’ve made great strides with the bike and everyone is working really well together. That’s what makes it fun. We’re still in this championship fight. Anything can happen. I’m really glad we came away with the win because I was tired of finishing second. We’ve got the speed and we’re consistent every week so I’m glad to finally make it happen. The track was tricky. It was really hard-packed and had some ruts. The whoops got really rough and the ‘lappers’ were there so we had a little bit of everything.”

Unfortunately, Roczen’s RCH team-mates Broc Tickle and Jake Weimer didn’t fare quite as well: Weimer was collected on the third lap – an incident not of his own making – and was forced to retire his machine immediately. Tickle also went down on the same lap but was able to pick his bike up and solider home to finish 14th.

“It was a good night overall for RCH,” commented RCH team manager Kyle Bentley. “Any time we can come away with the win, it’s a good night. Ken had a so-so start and was able to push to the front, make a pass on the series champion (Ryan Dungey) and stretch it out. (Eli) Tomac gave us a run for our money in the middle of the race but Ken was able to pull away and come home with the victory. We’ve had the fastest bike in town the last three weeks so it’s a great feeling to come away with the win. We’ll press on to New Jersey next weekend and try and win the last two.

“Broc rode awesome. He had a mid-pack start, got caught-up in some mayhem in one of the rhythm sections but was still able to finish strong. He was happy with the motorcycle. It was an unfortunate incident for Jake Weimer; another rider cross-jumped him in one of the rhythm lanes and he didn’t have anywhere to go. Someone landed on the back of him and he got pretty beat up. We’ll evaluate his situation and hopefully he’ll be ok to race this coming weekend,” added Bentley.

Monster Energy AMA Supercross returns to East Rutherford, New Jersey this weekend when the series visits MetLife Stadium for the 16th of 17 races on the 2016 Monster Energy Supercross calendar.