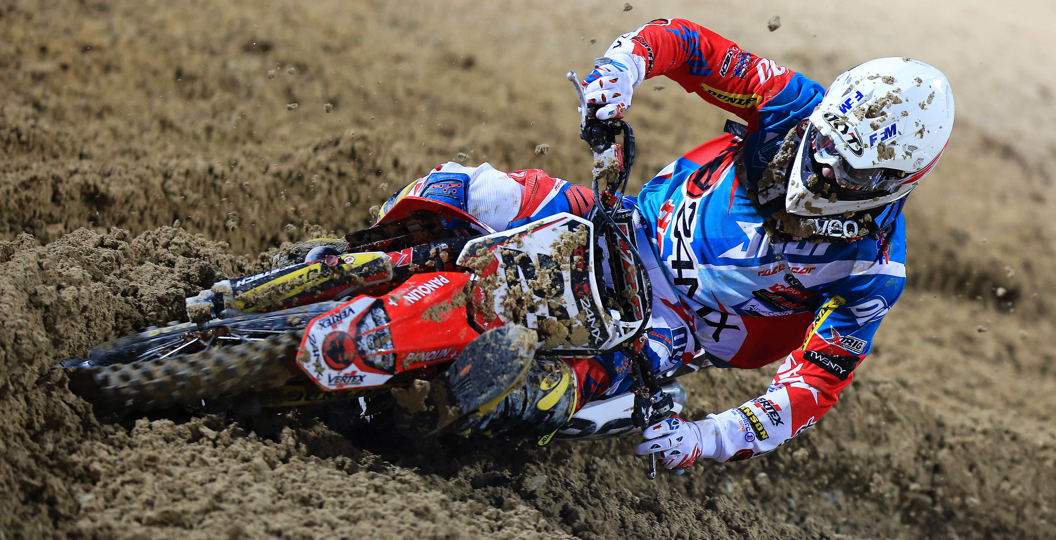 Charlier showed good potential in the early sessions on a track where he rode to a third place moto two years ago. In Friday’s qualifying race Christophe tried to avoid another rider early on and was forced to put his right foot on the floor. The impact caused an immediate shock and huge hemorrhage in his heel. The former European MX2 champ was in so much pain he pulled out of the race. Bengtsson rallied to a decent 19th place in qualifying.

A good initial jump from the gate in both motos underlined the potential of the 24MX Honda CRF450R, but Charlier was forced to ride with a pain-killing injection and had to settle for 20th in the first sprint. Feeling slightly better in the second moto the Frenchman posted some impressive lap times but his charge forward was limited due to the broken brake line of his rear brake.

Bengtsson rode in a points-scoring point position for most of the first race eventually to come home 22nd. In spite of horrible abdominal cramps ‘Fillibang’ showed tenacity in the second moto and crossed the finish line in 20th position.

Christophe Charlier: “It wasn’t a great GP. During the qualifying race I hurt my heel and I was in quite a lot of pain. I turned out to be one of the weekends where you just have to grind it out to score points! The first moto was super difficult, I had a bad start and suffered a lot from my foot injury. I had a bad start again in the second moto, to make things worse I had a problem with the rear brake and rode without one for the complete moto. The good thing we can take from today was my feeling on the bike and my speed at the end of the second moto.Now I have one week to recover to show what I can do in Thailand.”

Filip Bengtsson: “The first GP of the season is always tough. Especially this one! I had never ridden here before. So between the soil, the layout and riding at night Losail makes a very unique track on the calendar. On Friday I struggled a little bit with the setup of the suspension but we made good improvements. Before the races today I had  a food poisoning which made me feel bad and left me without energy. That was a big shame because I had a solid start just outside the top ten in the second race. I know I could’ve done more, however the upside is that I got the first MXGP point in the bag. From here on it can only get better.”