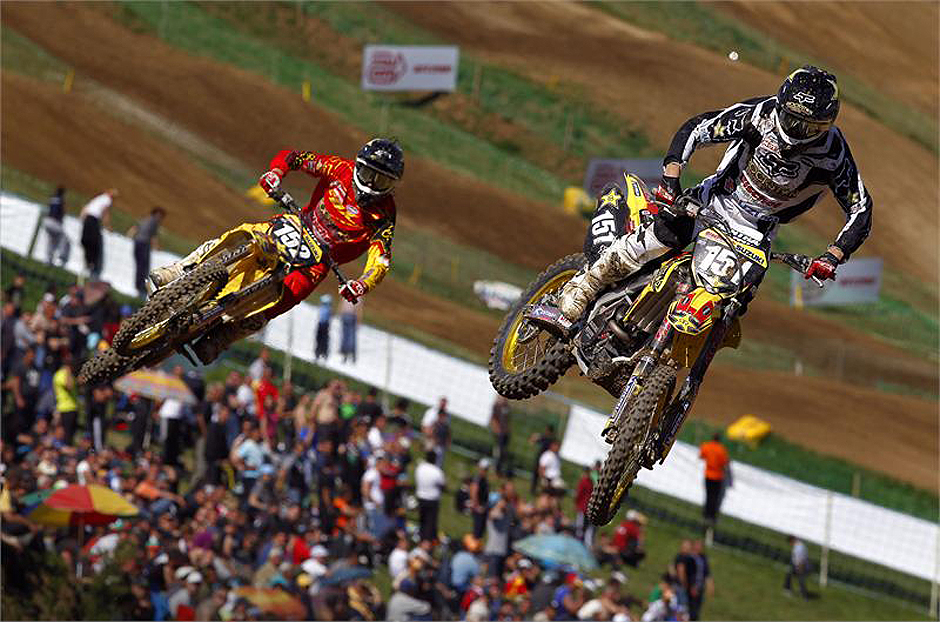 The FIM Motocross World Championship has clicked into a higher gear and only one week after the visit to Bulgaria Rockstar Energy Suzuki World MX1 will roll into the small paddock at Fermo for the Grand Prix of Italy this weekend.

For Belgian star Clement Desalle the third round of 16 will provide a swift opportunity to forget his second moto error at Sevlievo last Sunday that denied the RM-Z450 racer the chance of a second consecutive podium result.

Desalle comes to the Adriatic coast having missed the Italian round in 2011 through injury but claimed a dramatic and exciting victory at Fermo in 2010. The 22 year old is nursing a slightly sore ankle after his slip in Bulgaria but plans to ride at a circuit tomorrow on his way down to the site. “We are currently on the boat,” he said today in his journey from east Europe to south. “My ankle is a bit better than it was and I hope to get on the bike somewhere tomorrow. I wasn’t in Fermo last year but I think it will be a bit better for me and the way I like to ride because it’s a little more technical compared to Bulgaria. It is hard at Sevlievo because it is so fast.”

Tanel Leok is aiming for a better set of moto finishes than he achieved last weekend, although when he aggravated a pre-season leg injury during practice, the determined Estonian’s options were limited on race day where he finished 11th overall. “Bike time is the important thing for me at the moment,” he stressed. “Fermo is not my favourite track if I’m honest. I prefer Sevlievo to Fermo! I hope I can go quicker than I did last weekend and it will be important to try and get in a rhythm that allows me to be closer to where I want to be in the race.”

Fermo hosted the final stop on the FIM calendar in both 2010 and 2011 but has now been moved to an earlier slot on the schedule, partly in avoidance of September/ late summer temperatures. The scenic course located on a sharp hillside opposite the small town is typically Italian in that the layout coils and weaves and is formed of a hard-pack terrain. The track is distinct through the massive ‘heart-in-the-mouth’ downhill drop four corners after the start-straight.

Due to the circuit’s position at the peak of a large rise on what is a rolling and dipped topography in that particular region, any hint of rainfall could pose problems but thankfully the early forecast for the weekend predicts bright skies and a Celsius count in the mid-twenties.

Rockstar Energy Suzuki Europe’s MX2 racers Harri Kullas and Petar Petrov will again be joined by rising Spanish star Jorge Zaragoza this weekend as the third round of 16 in the FIM Motocross World Championship will also entertain the second of seven races in the EMX125 European Motocross Championship.

The compliment of two factory-backed RM-Z250s will be joined by the fettled RM125 under the distinctive yellow awning as the team rolls across the many steep but small hills on the Adriatic coast to the Fermo circuit for the Grand Prix of Italy.

Fermo hosts a stop on the FIM schedule for the third time in three years and presents the German squad with their second hard-pack terrain in the space of a week after the fast dirt found at Sevlievo in Bulgaria last weekend. It was at that meeting where Kullas shone in the first moto to capture fifth position and score sixth overall to indicate that his recent physical problems are starting to clear. The Finn missed the trip to Italy last season through injury and picked up 13th place in 2010. “I think Fermo was really hard in 2010,” he said. “It was tough to deal with. I couldn’t race in 2011 but from the TV pictures it looked a lot better. I think if it is graded and they water it well then it will get rougher, more technical and better.”

Petrov will move into a more ‘normal’ race scenario after all the attention and expectation at his home Grand Prix and the Bulgarian is also on the road back to full fitness after his pre-season crash one week before the season opener in Holland over Easter weekend. “I’m not a great fan of Fermo but I hope to do better than in Bulgaria,” said Petrov who placed 14th at Sevlievo. “I still needed to take painkillers during the warm-up in Sevlievo and my aim is to be fitter for Italy and not need the medication. We will see.”

For Zaragoza, Bulgaria was a chance to begin easing the hype around his debut and emergence and show his potential on the track with two very encouraging performances in the busy 125cc two-stroke class. A first podium and third position in the Championship standings is a solid place to kick-on for the rest of the series and the characteristics of Fermo are bound to be to the 15-year-old Valencian’s liking.

The typical Italian hard-pack was a special surface to deal with in 2010 but the reforms made to the ground for 2011 provided a different experience and required a slightly alternative approach. The jump-laden course winds up and down the side of a steep hill opposite the town. It is picturesque and almost unique for its geographical setting. The weather forecast for the weekend points to good temperatures (mid twenties) and sunny skies.