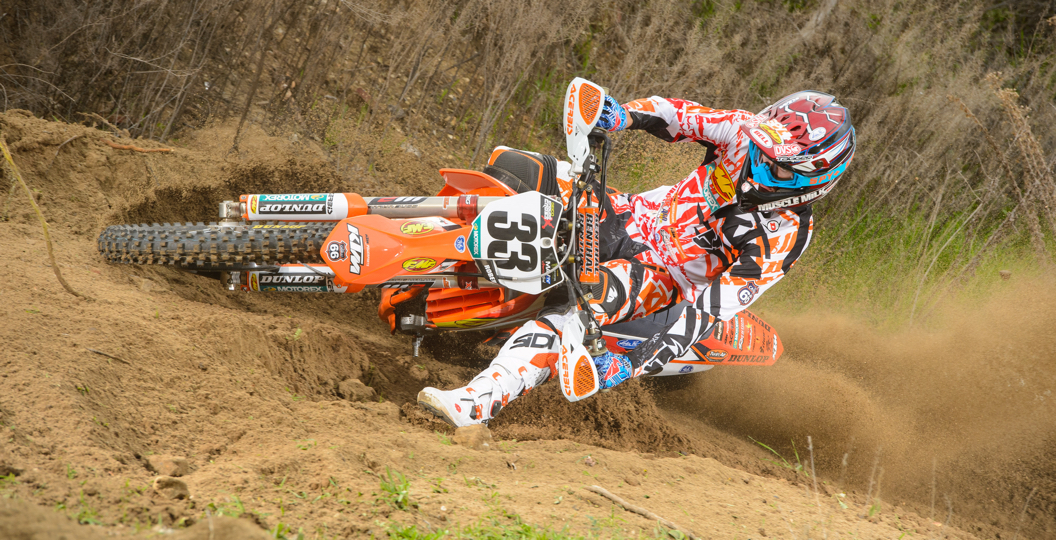 Factory FMF/KTM rider Taylor Robert wrapped up a good night at the seventh round of the 2014 EnduroCross at Boise Idaho to finish second but Red Bull KTM’s Taddy Blazusiak crashed in the first corner of the main event and crossed the line in fourth place.

The penultimate round ended with a win for Cody Webb while Colton Haaker took the final podium place. Webb now has a 15-point lead over title defender and five times championship winner Taddy Blazusiak going into the final round in Ontario California next weekend.

Blazusiak got away well in the first heat, then grabbed the lead from Mike Brown in lap three after Brown went down. Webb then passed Blazusiak when he got caught in the fire pit and the two riders finished 1-2 to advance to the main event. Robert, a winner in the previous round grabbed the holeshot in the second heat, was in front at the end of the lap and held on to win by an impressive 15 seconds.

Robert got another decent jump in the main and was third at the first corner where Blazusiak went down hard and had to scramble back into the action from nearly last position. Robert then moved up to second in the next lap while Blazusiak continued to work his way through the back of the pack. Red Bull KTM’s Polish rider was still 12 seconds away from the lead by lap five but had moved up to fourth position. Meanwhile Robert attacked Haaker for the runner-up position and eventually made it stick when Haaker had an issue in the fire pit on the final lap.

“I had a lot of fun on this course tonight,” stated Robert after the race. “It was good to be battling so closely with a few riders. We only have one more round left, but I am ready to prove I have what it takes to consistently win.”

Generally it was a good weekend for KTM with eight of the top 12 finishers in the men’s event on the Austrian-made bikes.

Factory FMF/KTM rider Kacy Martinez also contested the women’s event at the Idaho EnduroCross but she was caught up in a first turn crash and ended lap one in seventh. She made good progress in the remaining laps to finish a solid fourth.