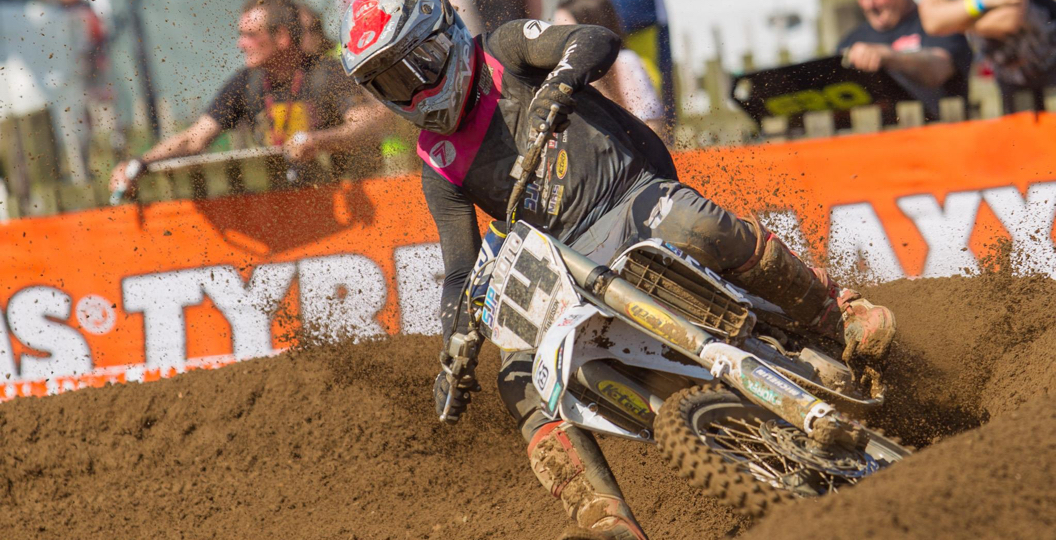 Blistering sunshine and clear blue skies were the order of the weekend, as the SJP Moto Husqvarna team arrived at Lyng in Norfolk for the second round of the Maxxis ACU British Motocross Championship. After a strong start to the championship, the team were hoping to continue that form.

The day started with qualifying and the track was in perfect condition for racing. In the MX2 class Dexter Douglas produced a strong lap time, for twenty-fourth fastest, with teammate Tom Neal just behind in twenty-eighth position. In the MX1 class, Rob Davidson struggled to pull together a strong lap and finished the session in sixteenth place.

Tom Neal struggled on the opening lap with a couple of small crashes, in the opening MX2 crash, whilst Dexter Douglas started inside the top fifteen and was riding well early on. He made a small mistake, however, and started to ride tight, so slipped back to twentieth place and scored another championship point. Neal spent the whole race trying to recover from his early mistakes and finished just outside the points in twenty-first. The second MX2 race saw both Neal and Douglas miss out on scoring points, after struggling during the race and suffering from arm pump and mistakes.

In the MX1 class, Rob Davidson was hoping to turn his qualifying position around with two strong results. In the opening race Davidson didn’t get the best jump out of the start and had to recover to a steady twelfth position, where he remained until the finish. Then in the second race Davidson was hoping for a better start and wanted a top-five result, but a crash on the first turn ended all hopes. After recovering to inside the points Davidson slipped off again and had to come back to finish twentieth at the flag.

The team’s youth riders now prepare for the second round of the British Youth Nationals at Brampton next weekend, but the pros next event is at Canada Heights for the third round of the Maxxis ACU British Motocross Championship.

Rob Davidson: “Today has been a really steady and slow day for me. My qualifying of sixteenth wasn’t great and I was annoyed at that. Then in the first race I rode consistent in twelfth, which isn’t where I want to be, but I was hoping for a strong start in the second race and to put in another impressive result. A first-turn crash ended that though. I then recovered to inside the points and tucked the front again. I then had to come from twenty-second to twentieth on the closing laps to score a point.“

Dexter Douglas: “Today has been okay. I got twenty-fourth in qualifying and that was better than the opening round. Then in the first race I got a good start, was inside the top ten on the opening lap and then running in fifteenth when I got arm pump and dropped to twentieth. In the last race I got a really bad start and had to pass a lot of riders, so could only get to twenty-sixth at the finish.“

Tom Neal: “Today has been a real struggle. I didn’t get a good time in qualifying, which set me on a bad path all day. In the first race I crashed twice on the opening lap and recovered to twenty-first, then in the second race I struggled to get into the race. I’m struggling a bit at the moment to transfer my speed during the week to the races.“

Leighton Haigh: “In the MX2 class Dexter once again scored a point in the opening race, but struggled in the second, so there is some work to be done there. Tom struggled all day and was in bad positions with crashes and mistakes. In MX1 Rob’s first race (a twelfth) was okay, as the field is strong, but we really aim for him to be inside the top ten each week. In the second race he was involved in the first-turn crash and recovered well to get into the points, before going down again, but he was pushing hard and we can’t knock him for the effort shown.“