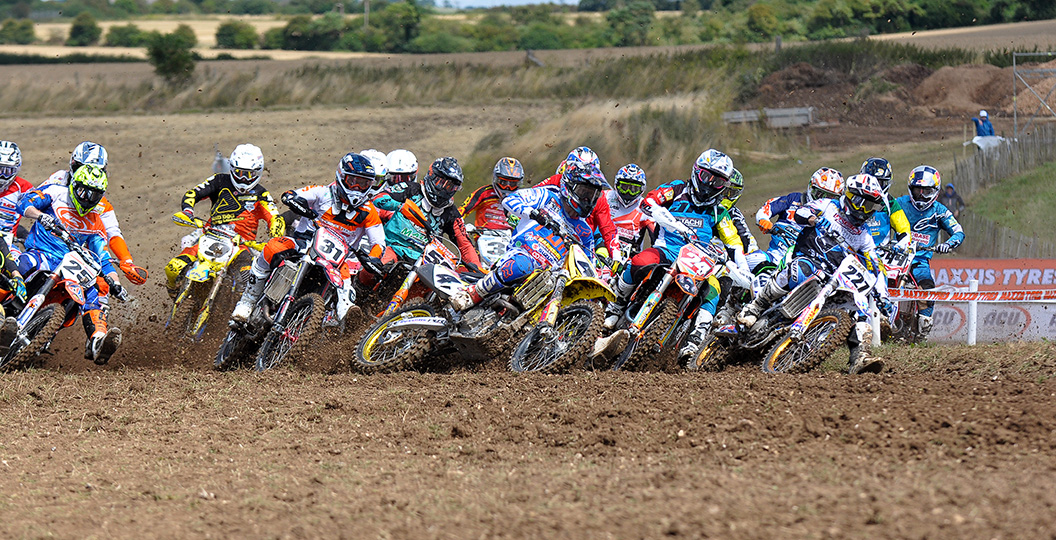 Following weeks of speculation, Cusses Gorse finally hosted the seventh round of the Maxxis British Championship this past weekend, and despite the threat of torrential rain, it was a great event that attracted a larger crowd than normal.

The start was a crucial part of every moto on Sunday, as the rider that took the holeshot each time could take control of the race immediately. It was Matiss Karro that led the MX2 field around on the first lap of moto one, closely followed by his teammate, Adam Sterry. After initially starting in third, Bryan Mackenzie dropped back with a suspected mechanical issue (reports suggest a gearbox problem), which paved the way for Steven Clarke to take a podium spot.

Despite the fact that Steven Lenoir (and later Max Anstie) was nipping at his heels for the duration, Clarke didn’t let up and took the final spot on the moto podium behind Matiss and Ada and just 0.124 ahead of Anstie. Lenoir took fifth after being stuffed by Max following the uphill quad, five seconds ahead of Mel Pocock, who had a mediocre ride, finishing where he started. Michael Eccles, Mackenzie, Lewis Tombs and Luke Norris rounded out the top ten in this one. Where was Neville Bradshaw? His bike let go with three laps remaining, hence why he garnered zero points.

The second moto was quite similar for the most part, as Matiss again took the early lead and led every lap on his way to a moto victory. After disposing of Ben Watson very early on, Mel Pocock had a much better ride this time around, shadowing Matiss for the duration, but eventually ending up seven seconds down. Lenoir appeared to be the rider that found it easiest to make passes, as he was as far down as seventh at one point, before eventually moving up into third in the second half of the race.

Ben Watson held on for fourth, ahead of Mackenzie, Bradshaw, Eccles, Sterry (who had a fall whilst in third), Clarke and Tombs. You’ll notice that there was no Max Anstie in this one – he pulled out on the sighting lap, because of the recurring bike problem. We will have a revealing interview with Steve Dixon on that this week.

When the third and final MX2 encounter set off, there was a different face out front, as Mel Pocock led the riders around, desperate to steal some points back in the title fight. It wasn’t to be, however, as Matiss found his way through after a couple of laps and controlled the race from there. Pocock ended five seconds down and was right there with the Latvian, but he was just a tick off; he also finished one second up on Steven Lenoir in third.

In the opening MX1 moto Kristian Whatley got out to the early lead, with Shaun Simpson in tow. The gap between the two varied throughout, as backmarkers and other factors played a part; however, Kristian eventually took the win after leading every lap. Shaun was a comfortable second, as you would expect, with Graeme Irwin eighteen seconds back in third following an uneventful moto. Gert Krestinov finished fourth, after starting there, ahead of Brad Anderson, who made good forward progress. Nathan Watson, Luke Hawkins, Nathan Parker, Alex Snow and Priit Rätsep rounded out the top ten.

Although Whatley again got out to the early lead in moto two, Simpson elected to waste no time, as he immediately pushed through to take the lead. However, he never really separated himself from Kristian, as he won the race by just one measly second in the end. Irwin was more of a factor this time around, as he was just three seconds adrift. Elliott Banks-Browne finished a strong fourth, ahead of his two teammates, Nathan Parker and Brad Anderson. Nathan Watson, Alex Snow and Gert Krestinov followed them, with Luke Hawkins in tenth. Thanks to a commanding points lead, Shaun also claimed the 2014 MX1 British Championship title following this moto, to the delight of the teams and fans.

The final MX1 moto was all Graeme Irwin, as he set out and established a gap immediately. After controlling the race from the front, he went down very hard with three laps remaining, but somehow got up and soldiered on to claim sixth. However, he was still feeling the effects an hour later, and was taken to a nearby hospital by ambulance; we’ll have an update on his condition later in the week. With Irwin on the ground, Shaun Simpson cruised through to take another moto victory and the overall, ahead of Whatley and Brad Anderson in third, who had his best ride of the day.

Elliott Banks-Browne had his best day since his return from injury, with another fourth in moto three; he was followed by Parker, Krestinov, Irwin, Watson, Snow, Stuart Edmonds and Hawkins. Shaun Simpson claimed the overall victory, unsurprisingly, with Whatley second overall and Irwin (who really deserves an abundance of praise) third.

The MXY2 class featured some explosive racing again, but it was Liam Knight who eventually won the overall, after tying on points with Jay Hague – both riders had a first and a fourth. Jason Meara was third overall, with a fifth and a second to his name.