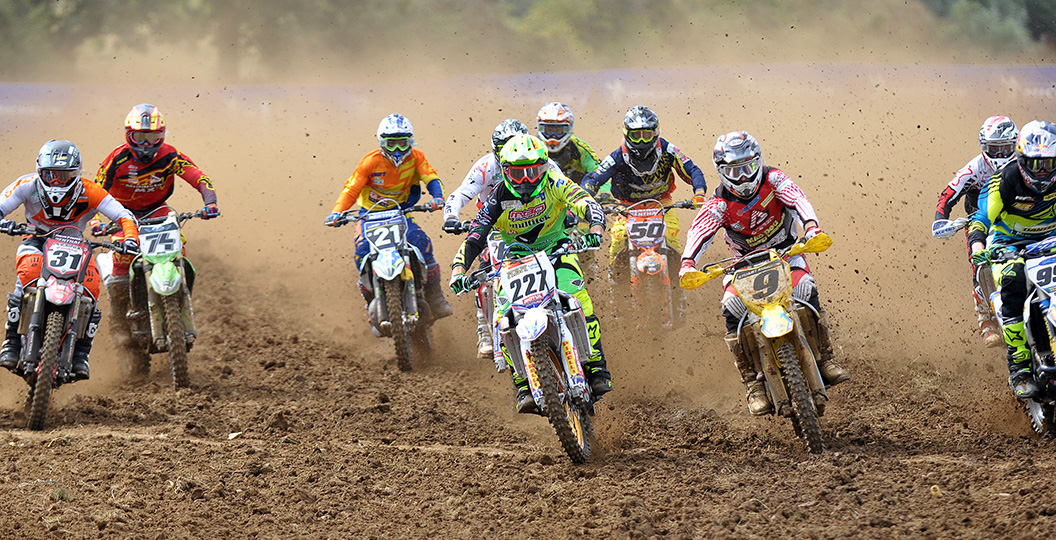 For the second time this season, the MX Nationals series visited the scenic circuit of Culham this past weekend. Although the location was the same, the track was completely different, although not everyone was happy this time around. The racing was superb though!

There were many stories to follow in both classes, but one that everyone was keeping an eye on was the on-going title fight between Kristian Whatley and Nathan Watson. The two were inseparable all weekend and the momentum changed hands a few times. Nathan took the holeshot in the first moto on Saturday and immediately established a gap over Martin Barr, whilst Whatley was fighting his way through the pack.

After starting eighth it took Kristian six laps to move into the runner-up spot, and on that same lap Elliott Banks-Browne moved around Barr and into third. Once Kristian was in second he dropped the hammer and started cutting into the deficit at a fast rate. With the MBO Sport Yamaha rider lapping two seconds faster, it seemed Nathan was powerless. However, he just held on for the win by a measly two seconds! Elliott Banks-Browne was a solid third, but Barr was right with him. Gert Krestinov, Alex Snow, Brad Anderson, Stuart Edmonds, Jamie Law and Ashley Wilde rounded out the top ten.

Following his strong display in moto one, most presumed the race was over when Whatley took the second moto holeshot. Nathan took second early on, and the two immediately ran away from the pack. EBB, Edmonds, Barr and Krestinov attempted to chase the top two, but just couldn’t hold on. Kristian was actually pulling away in the opening laps, but Nathan then flicked a switch and set a low 1:47 lap time, astonishingly.

Although he was right there, he was not close enough to make a pass and had to settle for second. Krestinov made a move on Elliott with a couple of laps to go to take the final spot on the podium, with Edmonds a strong fifth ahead of Snow, Anderson, Law, Luke Hawkins and Shane Carless.

The stage was set for another titanic battle in the final MX1 encounter, as Kristian took another holeshot with Anderson and Watson in tow. Nathan then made an aggressive move for second, desperate to not let his rival get too far ahead. There was really nothing separating the top two in the first half of the race, but then Whatley made a big mistake on the jump following pit lane. This allowed Nathan to get close in enough to make a pass and may have rattled Kristian somewhat, as he was tentative on the jump on the laps following this.

Watson eventually made the move on lap ten after squaring Whatley off in a corner and running it up the inside of him. The Dantec Husqvarna UK rider then broke Kristian, as he pulled out a gap immediately and took a strong win, as well as a lot of momentum moving forward. Krestinov again made a late move for third on a Buildbase Honda, although it was Anderson this time. Banks-Browne was fifth followed by Edmonds, Barr, Wilde, Law and Snow. With his final moto win, Nathan took the overall win too; Whatley and Krestinov joined him on the box.

There was no shortage of action in the MX1 class, but MX2 was the same, as there was an influx of wildcards. Lewis Trickett took the holeshot in race one in his return to racing – there was no rust on him! Pocock took the lead early on though and immediately tried to run away from the field. However, when Ben Watson moved into second on lap seven, he started to cut into the gap and took the lead three laps later. Although he appeared to be faster, Mel then regrouped, made another run at him and eventually made the pass.

Watson made a mistake a lap later and lost spots to Neville Bradshaw and Bryan Mackenzie, which is how the race finished. Lewis Tombs had an impressive run in fifth, with Adam Sterry sixth after a fall on lap one. Steven Lenoir (who was feeling quite ill), Trickett, Rob Davidson and Carlton Husband rounded out the top ten.

Sterry took the holeshot in moto two with Pocock, Watson and Lenoir in tow. Things were shaken up on lap three, as Adam had a big crash on the jump after pit lane following an incident with Mel Pocock – the incident ruled Sterry out of the moto, whilst Pocock continued in fifth. Lenoir inherited the lead as a result of this and dropped the hammer. Although Ben Watson made a move on Mackenzie for the runner-up spot and attempted to go after Lenoir, he didn’t made too much progress, despite being the fastest man on-track towards the end.

Steven Lenoir won by eight seconds in the end, with Watson a strong second. Mackenzie was five seconds further adrift in third, following another good showing, just ahead of Pocock in fourth. Bradshaw was fifth, and lost another four points to Bryan, followed by Tombs, Trickett, James Harrison, Luke Norris and Matt Callaghan.

The third and final MX2 holeshot went to Mel Pocock, although his lead was short-lived, as he crashed in turn four and handed the lead to Mackenzie. Trickett moved into second at this point, but could do nothing about Bryan, who pulled away with ease. Lewis held second for the duration though, and in an impressive fashion too, as Ben Watson (who took third on lap three) couldn’t run him down. Bradshaw was a strong fourth after getting caught up on lap one and Pocock rebounded for fifth. Tombs, Davidson, Harrison, Todd Kellett and Husband rounded out the top ten.

With three different moto winners, the overall results were shaken up quite a bit. Bryan Mackenzie took the top step, following three consistent finishes, with Ben Watson second and Mel Pocock third. Eight points is the difference between Bradshaw and Mackenzie in the title fight now – the race is on!