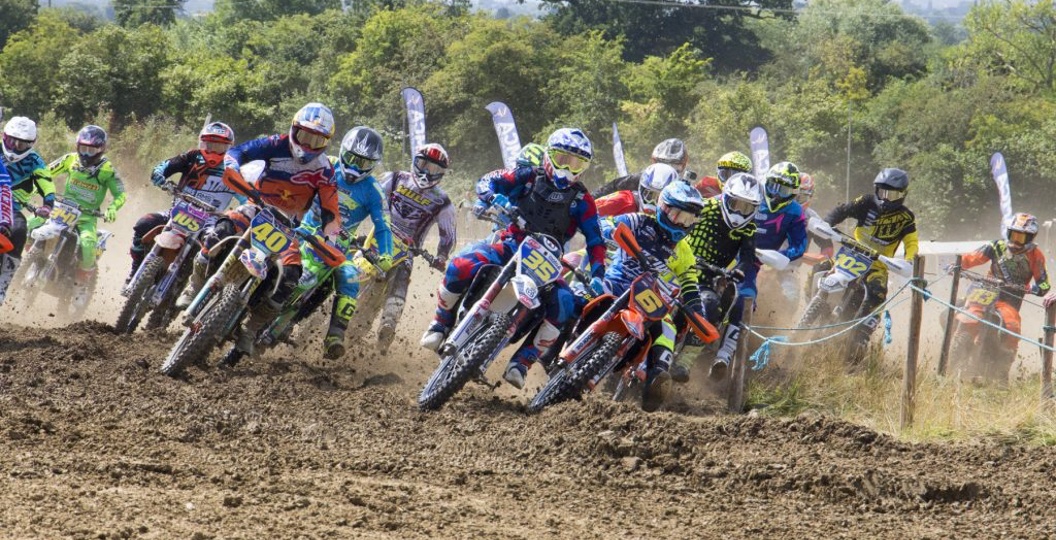 Brookthorpe was the setting for the penultimate round of the AMCA championship. With the MX2 title all but over, Josh Waterman could be crowned champion if he could gain thirty points on his closest rival Lewis King. In the MX1 division, the championship had been heating up as Gary Gibson hit a brilliant run of form and was chipping away at Luke Burton’s lead as he just cannot get the starts that he needs.

Starting off with the MX2 class, Jansen Day was a bullet out the gate, although he was quickly passed by Lewis King who would settle into the lead while Waterman and Rowson were left fighting through the pack after mediocre starts. King was able to build a comfortable lead until disaster struck at the halfway point and he would go down. This handed the lead to Waterman, who had Rowson closing in. The pace really intensified and Rowson was right there, but he couldn’t find a way past before the line and Waterman would take the win by just over a second.

Race two saw Day take another convincing holeshot, but this time he managed to hold the position through the opening few laps until he came under fire from Rowson. The ‘110’ of Rowson would take the lead and set off into the distance leaving Day and Waterman to fight over second place. Then, with just a few laps remaining, a puncture for the race leader caused him to slow and drop down to fifth spot. This put Day in a race-winning position and it would be his first ever win at this level if he could hold on. On the very last lap, however, he had nothing else to give and this gave Waterman the chance to sneak through and take another race win.

Heading in to the final race of the day, Waterman only needed to score two more points than King to be crowned the champion. Day would take his third holeshot of the day and this time he wasn’t going to give up the lead, he wanted that win. King was in second from the start, but at the halfway point he was coming under pressure from Waterman. King needed the position to keep the championship alive, but Waterman wanted to seal the deal and made the move. Day would take his first win and Waterman wrapped up the MX2 championship.

Gary Gibson had terrific starts in the MX1 class, but it wasn’t all plain sailing for him. In the opening race he took the early lead, but would fall on the third lap and bring the chasing pack back into contention. Burton found his way into second and started to make a charge to the lead, but would also fall on the far section of the circuit and take a while to get his bike going again. The rest of the pack couldn’t match Gibson, even after the tumble, and he would again shoot of into the distance.

Race two was again a great start for Gibson and a clear holeshot and that was the last they saw of the ‘169’. The battle for second was fierce as James Dodd and Luke Dean went at it hammer and tong for the entire race swapping places a number of times, but Dean would eventually come out on top. Burton recovered from a poor start and worked hard to get on the back of the battle, but would go down again. Is the pressure of the championship starting to show?

Race three was another dominant performance for Gibson as he led every lap. The field was spread out in the final race as the track was at its roughest. Burton would finish second and salvage as many points as he could heading into the final round. James Dodd had a lonely ride in third, but acquired enough points to give him second overall on the day; a result I’m sure he will be happy with.

Heading into the final round at Long Lane there is just seventeen points in it at the top of the table. If Gibson can win all three races at the final round he will take the championship by a single point.